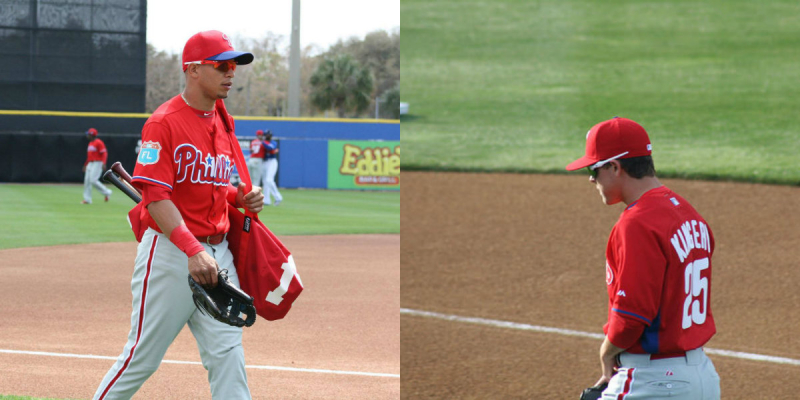 Scott Kingery's three-hit performance Tuesday highlighted why he's considered one of the organization's top 15 prospects and the potential long-term starter at second base.

Kingery, who split the 2016 season with Single-A Clearwater and Double-A Reading, slashed a combined .281/.335/.388 while driving in 46 runs and stealing 30 bases a year ago. He's going to start the season at Double-A again, but the 22-year-old looks like he could quickly advance through the minors and onto the Major League roster.

The problem is the Phillies are very deep at second base in the upper levels of their organization.

Jesmuel Valentin, who is also just 22, will start the season at Triple-A. Matt Winklemen of Phillies Minor Thoughts wrote in the offseason that Valentin may project more as a bench piece at the big league level, but he's moved through the organization quickly behind strong work in the field. If the Phillies hope to promote Kingery to Triple-A this season, it could force the team to move Valentin to another position, such as third base or the outfield.

At the major league level, the Phillies are about as deep as a team could possibly be at second base. Cesar Hernandez is coming off a season where he slashed .294/.371/.393 and posted a 4.4 WAR. The Phillies reportedly listened to offers on the 26-year-old this past off-season, but Jim Salisbury of Comcast SportsNet Philadelphia reported that general manager Matt Klentak had a 'very steep' asking price on Hernandez. The reason? If Hernandez can cut down on his mental errors and hit the way that he did in 2016, it would be hard for the Phillies to replace him with anyone.

Even beyond Hernandez, top prospect J.P. Crawford is eventually going to be given a chance to be the team's starting shortstop. When that happens, Freddy Galvis, one of the team's most respected players, is going to be pushed into competing for playing time at second base.

Then there's Andres Blanco and Howie Kendrick. Blanco, who is best suited as a middle infielder, will play primarily a bench role this season and may get some at-bats at first base as well. But if Tommy Joseph plays well enough that manager Pete Mackanin can't take him out of the lineup, he'll have to find a spot to give Blanco occasional at-bats. Kendrick, a second baseman by trait, will open the season in leftfield, but if Aaron Altherr plays well enough, he could push for more playing time. Both Roman Quinn and Nick Williams are waiting in the wings as well.

In the end, having a surplus organizational depth is a nice problem to have. Blanco and Kendrick are likely to be traded in July or August. Hernandez could regress in 2017, and if not the Phillies could move him for pitching. Hernandez may earn being the team's starting second baseman, which would make Galvis and Kingery, in different ways, expendable.

The most likely scenario is that Hernandez, Kendrick and Blanco are eventually traded, paving the way for Kingery to be the team's starting second baseman. Kingery would be of more value to the Phillies than Hernandez if all things are equal because he's obviously younger, cheaper and has six full years of team control remaining. Galvis could be dealt, but both him and Valentin could be bench pieces as the Phillies move towards contention.