Eagles Flyers Phillies Sixers About Us Write For Us
Sixers Stay or Go at the All-Star Break Part III: Backcourt
Flyers-Capitals: Game 60 Preview 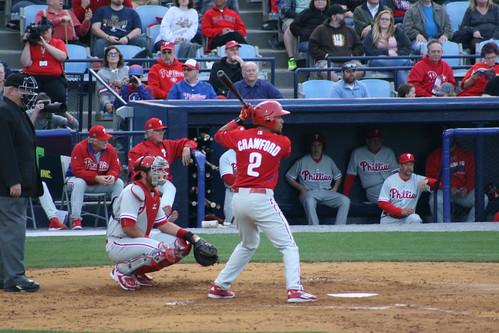 The Philadelphia Phillies have one of the deepest farm systems in all of Major League Baseball, and by looking at MLB.com's recent Top 30 Prospects list for Philadelphia, there is plenty to be excited about.

After deciding to finally hit the 'rebuild' button during the 2015 season, the Phillies made many trades, including shipping Cole Hamels to the Texas Rangers, in order to restock their organization with youthful talent. While some players they acquired in trades have already come up for a cup of coffee in the majors, many are still trying to prove they are worthy of a promotion this season to the big club.

The Phillies hope a 25-man roster composed of many of these players can help get the team back to competing for NL East pennants and World Series Championships for the city of Philadelphia.

Alec Asher, Jake Thompson, and Jerad Eickhoff all spent time in the major last season, with Eickhoff arguably being the best and most consistent pitcher the Phillies had during the 2016 season - all these pitchers were acquired from Texas and Houston. Vince Velasquez proved to be a very talented pitcher, when he's healthy, and the hype of many other pitchers yet to make some noise in the big leagues , such as Mark Appel and Nick Pivetta, look to progress in the right direction.

J.P. Crawford, for the third year in a row, is the Phillies top prospect going into the 2017 season. Despite what some may have considered a down year for Crawford, his plate discipline and eye at the plate continues to make him stand out. Crawford struck out 59 times, and walked a miraculous 42 times at Triple-A Lehigh Valley while being one of the youngest in the leagues.

This season has the potential to be make or break years for multiple minor leaguers in the Phillies organization. Roman Quinn has proven to be injury prone, yet playing an entire season healthy could soften the hearts of Phillies executives possibly losing interest due to past medical problems. Nick Williams, the outfielder acquired in the Texas deal, struck out 136 times in 2016, while batting .258 and belting only 13 home runs. Having also been benched on two separate occasions for lack of hustle, Williams has much to prove to show he is still on track in 2017.

While this organization is ranked so highly in part due to having acquired a slew of prospects over the years, it is worth noting that 12 of the 30 prospects on this years list were drafted by the Phillies. Names like Dylan Cozens, the 2016 Eastern League MVP and MiLB home run champion, Rhys Hoskins, who hit .281 with 38 HRs at Double-A Reading, and Sixto Sanchez were drafted by the Phillies and have the organization just as excited.

Here is the list of MLB.com's Top 30 Prospects for Philadelphia:

To be eligible for a list, a player must have rookie eligibility. To qualify for rookie status, a player must not have exceeded 130 at-bats or 50 innings pitched in the Major Leagues, or accumulated more than 45 days on the active roster of a Major League club or clubs during the 25-player limit period, excluding time on the disabled list or in military service.

The rankings follow the guidelines laid out by the new Collective Bargaining Agreement in terms of who falls under the international pool money rules: Players who are at least 23 years old and played in leagues deemed to be professional (Japan, Korea, Taiwan, Cuba) are not eligible.