Eagles Flyers Phillies Sixers About Us Write For Us
Clay Buchholz set for Phillies debut against Orioles
Flyers-Avalanche: Game 62 Preview 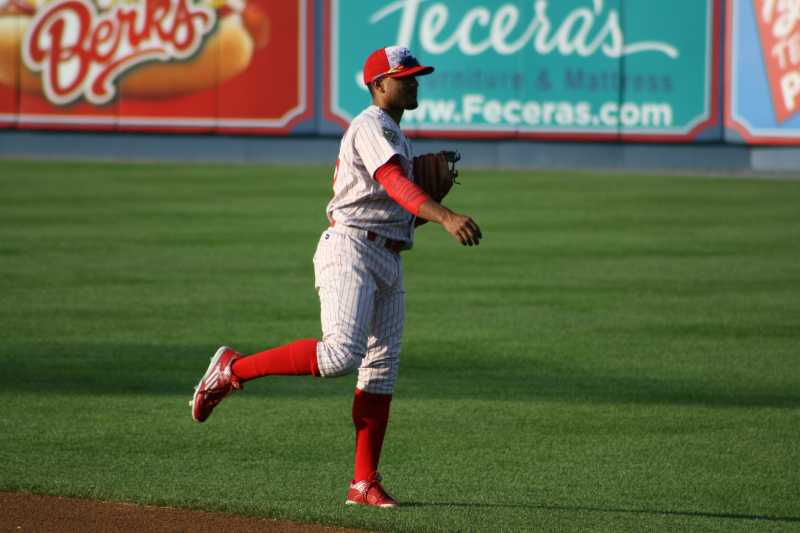 Jesmuel Valentin might be the first from last year's Reading team to make the Phillies, though he found a promotion towards the end of 2016 (Frank Klose/Sports Talk Philly)

We are in full force in Spring Training 2017, and the Phillies are already into Grapefruit League action in Florida.   Here is the return of the Phillies mailbag, which you can find on 973espn.com.  We will discuss it on the Sports Bash with Mike Gill, so tune in!

What do you think will be the Opening Day rotation in order? Give me a good prediction.
~Dalt

For the second year in a row, the Phillies come to Spring Training with improved pitching depth.   That of course, can quickly change.   Last year the Phillies had Charlie Morton for just four starts before the Phillies had to turn to their one starting backup, Adam Morgan.  But Morgan probably is far down the depth chart in the rotation and probably will have an opportunity to help the Phillies in the bullpen.

Right now I would think that Jeremy Hellickson and Clay Buchholz will get the first two spots in the rotation.  While I would not say that they are the best pitchers in the starting rotation, it is almost a veteran courtesy to give the veterans the top part of the rotation.  Plus, this allows the younger players to set back their innings, even though it is just a little bit.   The veterans will not be pitching for a spot in the Phillies rotation, but instead someone else's rotation come trade deadline time.

Jerad Eickhoff I would place third, right behind the two of them right now.  Since joining the Phillies in the Cole Hamels trade, Eickhoff has gone from a pitcher whom the Phillies hoped would just come to the Major Leagues right away and pitch some innings for them, to a solid pitcher with even higher upside than they originally thought.   Eickhoff got off to somewhat of a slow start in 2016, fracturing a bone in his thumb as Spring Training opened.

Phillies manager Pete Mackanin has already said that either Aaron Nola or Vince Velasquez will start the home opener.  After three games in Cincinnati, game four that will be held in Philadelphia, so it is clear that as of right now Nola and Velasquez are set to be in the fourth and fifth spots of the starting rotation.

Looking at Lehigh Valley, they will have a pretty stacked starting rotation.   The Triple-A IronPigs likely will have Jake Thompson and Zach Eflin leading the way, provided both get back on track from minor setbacks.  Alec Asher will be likely to start at Triple-A, with Ben Lively and Nick Pivetta behind them.   All five are in Phillies camp and will get a look, but there is no space for them in the starting rotation at this time.   If the Phillies have an injury, they will have plenty of options stashed away at Triple-A.

By the end of the season, who do you see starting in the outfield?
~Stephen

The Phillies will open the season with a pretty set starting outfield.  New acquisition Howie Kendrick will be in left field, Odubel Herrera will be in center field, and Michael Saunders in right field.  I think if all goes smoothly, both Kendrick and Saunders will be traded during the season.  It won't be because the Phillies have a pressing need to get rid of them, but hopefully that players in the Phillies system force the club to make room for them.

The Triple-A Lehigh Valley starting outfield will open to be very strong. Nick Williams will open the season as the IronPigs left fielder, Roman Quinn the center fielder, and Dylan Cozens in right field.  The fourth outfield spot right now likely goes to Aaron Altherr.  The left-handed bench bat who can play outfield and first base will come in the likes of Chris Coghlan, Daniel Nava, or Brock Stassi.

For the moment, Tyler Goeddel seems to be buried.  Because the IronPigs will have Ryhs Hoskins starting at first base and the designated hitter spot could go to someone who does not make the left-handed bench spot at the big level.  Perhaps the Phillies could trade Goeddel at some point during Spring Training.  If the Phillies add so much as one player to the 40-man roster, someone has to exit.

I am going to say that the final starting outfield will be Williams, Herrera, and Quinn.  I think Cozens is not far behind and will get a September call-up.  I think Altherr will play plenty, too, particularly against left-handed pitching.

Of the 2016 Reading team, who is most likely to make the Opening Day Roster?
~Michael

The 2016 Double-A Reading Fightin' Phils team was near dominant in the Eastern League.  The club won the division and made it all the way to the championship round.  However, the team lost several players along the way.   One was Quinn, who found his way to the Major Leagues, and another was infielder Jesmuel Valentin.   Jorge Alfaro had a cup of coffee in the big leagues too, given that he was the lone extra catcher on the 40-man roster, and Joely Rodriguez spent a good half a season there.

However, to open the 2017 season, not too many of the 2016 Fightin' Phils are likely to make the Opening Day roster.  So, I will give two names that I think have the best chance: Rodriguez and Valentin.  One is out of real need and the other would be a good temporary injury replacement.

The Phillies really do not have a strong left-handed guarantee in the bullpen.   The options right now are Rodriguez, Morgan, non-roster invitees Cesar Ramos and Sean Burnett, and youngster Elniery Garcia.   I think Morgan is primed to take one of the spots, given the lack of rotation openings at both the big league and Triple-A levels.  But I would call Rodriguez the front runner to take the second left-handed relief spot.

Valentin I think will be the player that the Phillies use as a short-term injury replacement.  Should any of the Phillies infielders suffer an injury during Spring Training that would affect the club on a short-term basis, I think Andres Blanco would temporarily assume the starting position.  Valentin, on the 40-man roster, would be easy to option back and forth between Lehigh Valley and Philadelphia during the season.

I realize that this is probably not the kind of name you were looking for, but be patient.   Most of the Double-A stars of 2016 will be a Triple-A Lehigh Valley and facing much more pitching that has had some big league experience.  Whoever steps up and knocks down the club's door will be the first to arrive.

Have a question for the Phillies mailbag?  Ask @FrankKlose on Twitter or send an email to sportstalkphilly @gmail.com