Report: Okafor to stay with Sixers 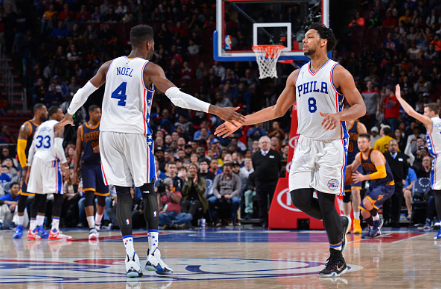 Nerlens Noel is headed to the Dallas Mavericks, according to a report.

According to Adrian Wojnarowski, Jahlil Okafor is now the man to fill that role, writing;

The Mavericks, along with many other teams, were attached to trade discussions involving Okafor, but somewhere the focus shifted to acquiring Noel.

The Sixers received a fair return for Noel, who is on an expiring contract. This deal may still yield more for the Sixers, as Wojnarowski also reports that the team looks to flip Andrew Bogut who was acquired in the Noel deal;

"Philadelphia is working to find another team to acquire Bogut, but if a deal isn’t reached, the team is expected to negotiate a contract buyout with Bogut so he can become an unrestricted free agent, league sources said."

The team's focus now seems to be on finding a suitor for Bogut, while Okafor appears to be safe.

Okafor remaining in Philadelphia is an understandable move from a business perspective, as Okafor has two more years of team control on his contract following this season and Noel was entering restricted free agency, where he was expected to receive a significant raise.

The Sixers will save money in the next two seasons by not paying Noel, and continue to stockpile assets in Justin Anderson and draft picks.

Noel showed consistent improvement throughout his tenure in Philadelphia, and now they will depend on the same type of development from Jahllil Okafor.