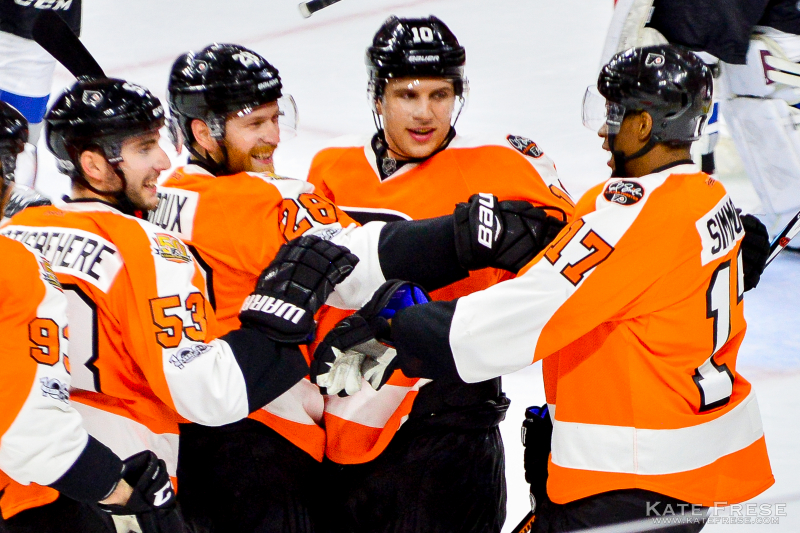 On the eve of the NHL trade deadline, the Philadelphia Flyers were in need of a victory against the league's worst team to keep their playoff hopes within reason.

However faint those hopes may be, the Flyers kept their slim chances alive with a 4-0 thumping of the Colorado Avalanche.

The Flyers offense was sparked by their special teams. The Orange and Black scored one shorthanded goal and two power play markers in the first period to pull away from the struggling Colorado team.

Wayne Simmonds started the scoring slightly over four minutes into the game when he, Andrew MacDonald and Sean Couturier got an odd man rush while killing a Claude Giroux penalty. After a short pass from MacDonald, Simmonds' attempt from inside the left circle passed through the five-hole of Avalanche goaltender Jeremy Smith.

Simmonds would continue to pour on the goals as he would tip a Shayne Gostisbehere slap shot while on the power play at 11:54 to put the Flyers up by two.

It appeared the Flyers lone All-Star had a hat trick slightly over two minutes later when Jake Voracek sent a pass toward Simmonds on another power play. After fans littered the ice with hats, Lou Nolan announced the goal was credited to Voracek to a chorus of boos.

Adding to their lead in the second, the Flyers got their first even-strength goal of the contest from Lehigh Valley Phantoms call-up, Jordan Weal. Weal's first tally in the NHL came off a deflection of a Radko Gudas shot from the point. Weal, positioned off the left post and in between the circle and crease, was able to get his stick on the shot and send it fluttering past Smith.

Steve Mason also stopped all 32 shots from the Avalanche for his second shutout of the season.

With the victory, the Flyers pull within four points of the Toronto Maple Leafs for the last playoff spot. However, it remains to be seen what general manager Ron Hextall will do come the 3 p.m. trade deadline tomorrow. He may choose to be quiet and see if the team can attempt to put together a run akin to last season's postseason push or test the trade winds on some of his more marketable assets.

Regardless of what happens after the deadline, the Flyers playoff push will continue on Thursday as they take on the Florida Panthers at 7 p.m. at the Wells Fargo Center. The Panthers sit three points ahead of the Flyers in the hunt for the last wild card spot in the Eastern Conference.