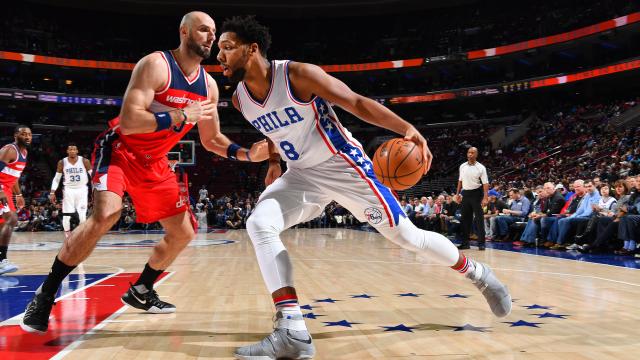 The Sixers' strength lies in their frontcourt. The Process has been centered around big men, and now the Sixers need to determine which players will be here for the long haul.

Ben Simmons has not played in a game after teasing the entire fanbase in Summer League. Brett Brown claims Ben Simmons will play this season, while Bryan Colangelo says that he will be patient with Simmons's rehab. It will be key for Simmons to play before season's end for the team to see whether he can play at point guard or if he fits better as the power forward moving forward. Knowing this will determine the direction that the Sixers go in the draft. Regardless, Simmons is not going anywhere. He is as important to The Process as "The Process" himself.

Jahlil Okafor has had one of the more interesting seasons in recent memory. He seemed poised to win the backup center job over Nerlens Noel, especially when Okafor's option was picked up at the beginning of the season in a contract year for Noel. Okafor has seen his name shopped in a rather interesting way, where nobody is exactly sure what his future is because of Bryan Colangelo. He was guaranteed to go to Boston, then was not moving, then Chicago, then New Orleans, then Chicago again. Now he is back on the floor. Okafor has shot better from the field than he did a year ago in less minutes per game, showing that his elite post ability is still there. However, his defense is still suspect and at times negates his offensive prowess. Regardless of his upside, it is hard to imagine Okafor remaining in Philadelphia past the trade deadline.

"Super Dario" has become less of a clever nickname and more of an actuality in the weeks leading up to the All-Star break. Saric is averaging 20.5 points 7.4 rebounds, 2.2 assists, and 1.2 steals over the last five games and he is the favorite to win rookie of the month honors for Februrary. Saric is the fine wine of the team, starting out not bad, but aging incredibly in his first season. He has shined with Joel Embiid injured due to a knee contusion, and has overtaken Ersan Ilyasova late in games as the power forward in crunch time. Dario Saric is here to stay, and likely going to be in the starting lineup for the rest of the season.

There is nothing bad to say about Joel Embiid besides his minutes restriction. All of his struggles are rookie issues that will iron themselves out. He has been a one man wrecking crew that has singlehandedly changed the trajectory of the franchise in less than a season. Joel Embiid is not and should not go anywhere.