Eagles Flyers Phillies Sixers About Us Write For Us
Previous month:
February 2017
Next month:
April 2017

After strong start, Sixers get blown out by Cavaliers

The Philadelphia 76ers started off strong, but never recovered from a blowout in the second quarter to lose to the Cleveland Cavaliers 122-105.

Less than two minutes into the game, Kyrie Irving shoved Justin Anderson into the Sixers bench and earned himself a flagrant foul. Interesting start. It seemed this shove was a retaliation from what looked like a shove from Anderson on LeBron James (although it looked like a flop, which might be why it wasn’t called).

Continue reading "After strong start, Sixers get blown out by Cavaliers" »

Former Philadelphia Phillies shortstop Jimmy Rollins grew up in Oakland, so signing a minor league deal with the San Francisco Giants this offseason seemed like a homecoming of sorts for the 38-year-old. Instead, the former National League MVP didn't make the Giants team out of Spring Training, meaning that his tenure with the club was only be contained to Scottsdale, AZ.

After the Giants told Rollins earlier this week that he hadn't made their Opening Day roster, there was still some thought that he could travel north with the team to play in their on-deck series which is a home-and-home with the Oakland A's, and would have potentially allowed Rollins to play the final game of his career in his hometown.

Instead, Alex Pavlovic of NBC Sports Bay Area says that the Giants have released Rollins, seemingly at his request:

Ruben Amaro Sr., who spent much of his life in the Philadelphia Phillies organization, has passed away at the age of 81, the club announced Friday.

We are saddened to hear about the passing of Ruben Amaro Sr.

Our thoughts and prayers are with his family. pic.twitter.com/cBnOj6C6sB

The Philadelphia 76ers visit the Cleveland Cavaliers. The Sixers are having their best season in a while, while the Cavs seem to look more vulnerable since LeBron James came back, at least on the defensive end. Is that enough for the Sixers to sneak a win?

The Flyers have landed one of college hockey's brightest stars.

GM Ron Hextall announced on Friday morning that the Flyers have signed forward Mike Vecchione to an entry-level deal.

Vecchione recently completed his senior season at Union College, posting 29 goals and 34 assists for 63 points in 38 games. He is also one of three finalists for college hockey's top individual honor, the Hobey Bakey Award.

With the 25-man roster set ahead of Monday's Opening Day — featuring newcomers such as Brock Stassi and Daniel Nava — final tune-ups will surely be in order Friday afternoon as the club opposes RHP Alex Cobb and the Tampa Bay Rays (12-16-4). Ten-year veteran RHP Clay Buchholz will take the mound for his sixth spring start.

Ruf's ninth inning home run against RHP Im Ki-young proved to not be enough for the Lions, however, as they would go on to fall 7-2 to the Kia Tigers in their season opener.

The Omaha, Nebraska native started the game as the designated hitter, batting in the cleanup position. He finished 1-4 with a strikeout.

Ruf, 30, was dealt to the Los Angeles Dodgers this past offseason in the Phillies' acquisition of 2B/OF Howie Kendrick. To make room on the 40-man roster for second baseman Chase Utley, the Dodgers sold Ruf's contract to the Samsung Lions of the Korean Baseball Organization in mid-February. Ruf will make $1.1 million this season in South Korea.

The Philadelphia Eagles have made a handful of offseason free-agent acquisitions this year, all signings with short-term contract details. These signings inspire a question: Are the Eagles focusing on sustaining long-term success or short-term fixes?

The Eagles are desperate to surround rookie QB sensation Carson Wentz with more talent, on both sides of the ball, than last year. This, as owner Jeffrey Lurie emphasized, is their highest priority. All of the upper management on the team believe Wentz has potential to be an incredible talent in the NFL, however, to make that happen, the Eagles need long-term sustainability within the locker room.

Let's take a look at some of the short-term deals the Eagles have offered their new players.

Phillies Roundtable: How many games will team win in 2017? 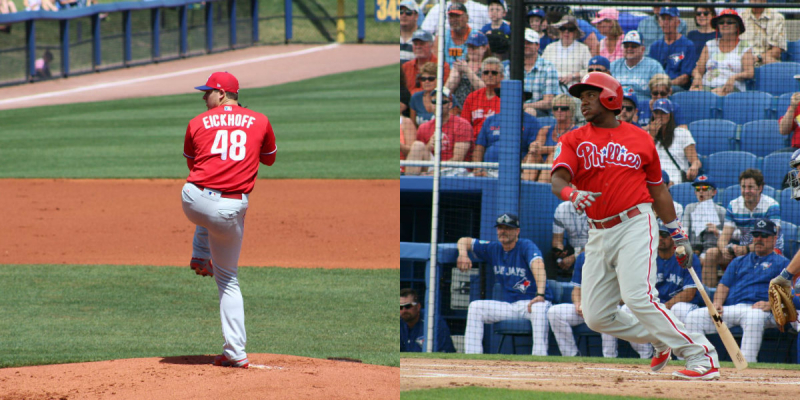 Jerad Eickhoff and Maikel Franco will be key in determining how many games the Phillies win in 2017. (Frank Klose/STP)

Normally as the season opens, there's a set number of wins that the Philadelphia Phillies are expected to reach. In 2017, that isn't necessarily the case.

A year after posting the worst record in baseball, the Phillies won 71 games in 2016. After adding Michael Saunders and Howie Kendrick, in addition to improving their bullpen talent, some Phillies fans believe the team could challenge for a .500 record if younger players like Vince Velasquez and Maikel Franco have breakout seasons.

On the other hand, there are those that would suggest the team's lineup still isn't that talented, and with the Atlanta Braves and New York Mets expected to be better than a season ago, there's a chance a wins jump may not come in a crowded division.

Sports Talk Philly staffers were polled on how many wins they think the Phillies will have in 2017, here's how they responded:

Continue reading "Phillies Roundtable: How many games will team win in 2017? " » 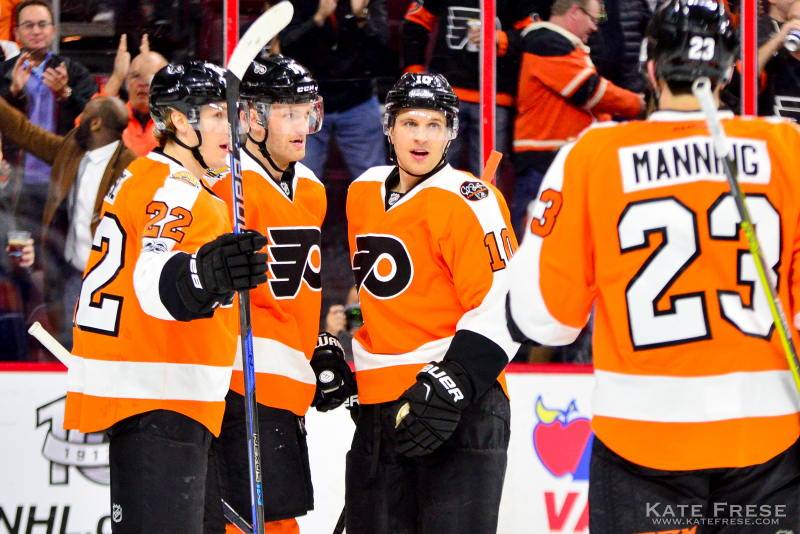 PHILADELPHIA -- It's been a while since the Flyers came out and took full control of a game right out of the gate. And as the New York Islanders came to town with their hopes at the last wild card spot in a tailspin, the Orange and Black had a chance to make up some ground.

They made a bold statement Thursday, with a resounding 6-3 win punctuated by a five-goal first period.