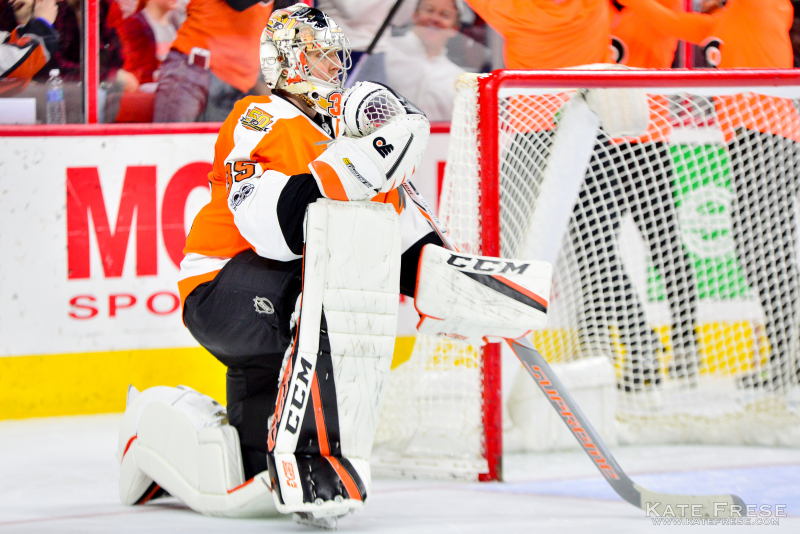 I feel sorry for Steve Mason.

The Flyers essentially rode his coattails to a lengthy winning streak, looking like a playoff contender with an established No. 1 goalie back in December.

But that was before the Flyers started to collapse through the end of December and into January. That was before Michal Neuvirth returned from injury on Jan. 7.

Once he did, Neuvirth started in goal for nine of the Flyers 11 games in February. Mason started the Flyers 3-1 loss to the Islanders on Feb. 9 and didn’t start another game until Feb. 28 when he shut out Colorado, 4-0, one day before the trade deadline.

Mason’s performance since that game has been admirable, especially given the circumstances.

Look at the things Mason has dealt with since getting his first start in seven games on Feb. 28. Neuvirth signed a two-year contract extension on deadline day, one day after Mason’s shutout win. The Flyers proceeded to start Mason in the next three games, two wins and an overtime loss.

With their playoff hopes starting to gain more traction, Dave Hakstol made the questionable call to start Neuvirth in goal in their most crucial game of the season against Toronto on March 9. The Flyers lost 4-2, which was the beginning of the end for their playoff chances.

Mason returned in net that Saturday afternoon against Boston and played well, making 25 saves, several of them on quality chances. The one he couldn’t stop was a tip off the stick of Brandon Manning with 5.6 seconds left in regulation. Seconds away from at least one point and forcing overtime, certainly with the help of Mason, the Flyers let another game slip away. The look on Mason’s face after that goal said it all.

Mason has started every game in goal since, including a back-to-back against Pittsburgh and New Jersey last week. That moved backfired as well, not just because Mason was helpless on four of New Jersey’s six goals that night, but because he left the game in the third after the Devils fourth goal with cramping, only to be in net again on Sunday in the win over Carolina.

To have that attitude to work through such an extensive workload after watching his counterpart get a contract extension, spending a month on the bench and then getting the bulk of the workload again, almost to a fault. And he’s been good the entire way.

Mason takes a lot of hate and blame. Sometimes, it’s certainly justified. The Flyers have seen goals against that need to be stopped in key game situations. Mason is also 5-4-1 in 10 games since Feb. 28 with a 2.20 GAA.

But you have to feel sorry for Mason too. He was the catalyst in two Flyers playoff appearances since arriving in Philadelphia in 2013. And he’s been treated like that and his dedication to the team this season, mean nothing and will just be turned away.