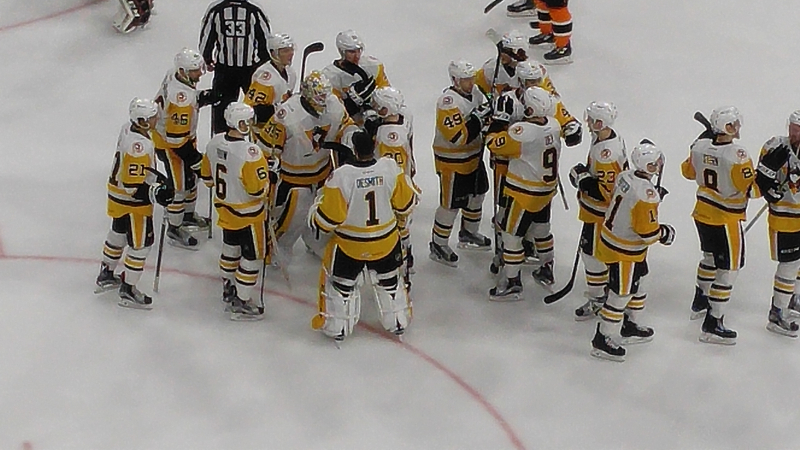 By Tommy Hendricks, Sports Talk Philly staff writer
The Lehigh Valley Phantoms got shut out for the first time this season in a disappointing 4-0 loss to the Wilkes-Barre/Scranton Penguins on Saturday night.
Tristan Jarry stopped all 35 shots he faced from Lehigh Valley, playing in his ninth game against the Orange and Black this year. In a game that had playoff implications from the start, it was given a playoff feel early.
The PPL Center was rocking from the start on Saturday night, with the crowd adding to the already playoff type atmosphere of the game. The intensity picked up on the ice early as well, with both teams throwing the body around for much of the first 20 minutes.
Tempers also flared early and often, with a lot of after whistle scrums. One such incident occurred when Cole Bardreau got upended and went colliding into Jarry and into the Pens goal. Jarry retaliated with some smacks to Bardreau's head.
The only goal of the period came of a strange bounce in the Phantoms end. A play behind the Lehigh Valley net saw the puck deflect of the skates of Tom Kostopoulos and to the side of the cage. Teddy Blueger found the puck, and appeared to guide it in with his skate. The refs went to the video tape, and after a long review determined the call on the ice stood as a good goal.
The Phantoms got a late power play chance to try to tie the score at 1, but were unable to convert before the end of the period. Greg Carey had the best chance on the man advantage, unloading a one-timed blast that missed the net and caught the safety netting. Lehigh Valley headed into the second with 20 seconds of carry over time on their power play.
The Phantoms could not convert on the man advantage on their carry over time, or on the other three opportunities they got in the second either. Wilkes-Barre/Scranton got a chance as well, and also did not convert.
However, the Pens did extend their lead by two in the middle period. The puck luck continued going in the Penguins favor, with two deflections leading to the score being 3-0. The first came as Adam Krause scored his first of the season by deflecting a point shot from Barry Goers past Alex Lyon 5:07 into the frame.
Then Jarrett Burton had a centering pass from below the Phantoms goal line ricochet off his stick and skate, which fooled Lyon and made it a three-goal deficit for Lehigh Valley. The Phantoms finished the period finally getting some momentum, and out shooting the Pens 24-16, but trailing by three going into the third.
Wilkes-Barre/Scranton's penalty kill, which is ranked first overall in the AHL, held the Phantoms to 0-for-4 on the man advantage in the third alone, and 0-for-9 for the entire game. Despite the amount of chances, Lehigh Valley just could not get on the board while up a man.
Ironically, the Pens would get the only power play goal of the game. Sam Morin took his frustrating night out on Ryan Haggerty by dropping the gloves and throwing punches. Morin would and an extra two for roughing and Kostopoulos would capitalize on the man advantage.
Kostopoulos tapped home a rebound off a shot from Tim Erixon to make it 4-0. The Phantoms appeared to score with just over a second left in the game, but the goal got waved off.
The 35-save performance for Jarry marks just his second shutout in 41 starts this season. However, Saturday's contest marks the first time in their 65 games this season that the Phantoms have been shutout. Lehigh Valley returns to action Sunday against the Bridgeport Sound Tigers.
Quotes
3 Stars
3. Teddy Blueger (WBS) - Goal, +2
2. Adam Krause (WBS) - Goal, Assist, +2
1. Tristan Jarry (WBS) - 35 saves, shutout, win