Eagles Flyers Phillies Sixers About Us Write For Us
Previous month:
March 2017
Next month:
May 2017

After pitching just shy of 200 innings in 2016 and posting a 3.2 WAR (per FanGraphs), Philadelphia Phillies right-handed pitcher Jeremy Hellickson had about as good of an April as one can have.

Jon Heyman of FanRag Sports reported last week that the Phillies may be willing to take on some of what remains of Hellickson's $17.2 million salary at the July 31 non-waiver trade deadline if it means they will get a better trade return for their Opening Day starter. While that makes sense and remains the most likely course of action for the Phillies, the club should consider extending Hellickson.

The Philadelphia 76ers received some pretty positive news regarding one of their top draftees from the 2016 NBA Draft. Furkan Korkmaz, a 19 year-old shooting guard for Banvit of the Turkish Basketball Super League, was named the "Best Young Player" by the Basketball Champions League this weekend. The 2016-17 season came to a close on Sunday evening for the Lehigh Valley Phantoms, as they fell in Game 5 to the Hershey Bears, 3-2, to be eliminated from the Calder Cup Playoffs.
Lehigh Valley fell short on another comeback in a season littered with them, having trailed in the series 2-0 and being able to force Game 5.
The Phantoms got themselves into an early hole in Game 5, going to the locker room after 20 minutes down 2-0. Hershey came out strong and had a great first period for the first time in the series, completely catching the Phantoms off guard.
The first of the two goals came from Stanislav Galiev, his third of the series. After backhanding a shot on net, Galiev followed up his rebound and caught Martin Ouellette down and out. Galiev popped the puck up over the sprawled out netminder to open the scoring just 5:35 into play.
Then Christian Thomas added his first of the playoffs at the 11:04 mark of the first. Tom Gilbert was able to get a shot from the point through traffic around two bodies. Thomas tangled with a Phantoms defender, but somehow got a stick on the puck to deflect it down past Ouellette and make it 2-0. Much like the start of this series, the Phantoms faced a 2-0 deficit with plenty of time left to try to rally back.
The Phantoms started their rally back early in the second period, with team captain Colin McDonald capitalizing on a power-play chance.
Madison Bowey went off for tripping, and the Phantoms went to work. Travis Sanheim had the initial drive on goal that Pheonix Copley turned aside, but McDonald was right there for the rebound. He roofed it into the top shelf of the net while he was getting blasted in the back with a hit to cut the Hershey lead to one.
Bowey made another big mistake minutes later, putting the puck up and out of play and getting called for delay of game. While the Phantoms did not score on their second man advantage, they did have great zone pressure and ran up the shots on Copley. The great work got the PPL Center crowd back into the game, and Lehigh Valley had the momentum heading into the final frame down just a goal.
Lehigh Valley looked to be in trouble early in the third, going to a 5-on-3 penalty kill less than four minutes in. First Sam Morin got called for delay of game, then Scott Laughton for a high stick, giving Hershey 1:24 of two-man advantage time. Lehigh Valley's strong PK, ranked second overall in the playoffs to this point, went to work, killing off both minors and seemingly getting the momentum back.
That all changed a few minutes later however. The Bears were back on the attack, and Nathan Walker found himself below the goal line with the puck. He hit a streaking Colby Williams with a pass, and Williams wasted little time wristing home Hershey's third goal of the game.
Lehigh Valley got one back at the 12:50 mark of the third, as Taylor Leier put a shot on the rush toward Copley. As Leier was getting taken out by a sliding Hershey defender, the puck slid across the line and into the net to make it a one-goal game. Leier's first point of the postseason gave his team new life late in the game.
The Phantoms started to press late in the third, looking for the tying goal. They pulled Ouellette with about two minutes left, and the final push was on.
Unfortunately for the Phantoms, that push came up short. Copley stood tall in goal for the Bears, turning aside 10 of the 11 shots he faced in the final period. The Bears rushed their netminder in excitement as the final horn went, knowing they had survived the war and moved on. The Phantoms stayed quiet however, reflecting on the season that was and the disappointing first round exit.
The Phantoms could not complete the final comeback of the 2016-17 season, but played well enough to earn the respect of their bitter rivals in the postgame handshake line.
For the Phantoms, it's looking ahead to the 2017-18 season. For the Bears, they move on to face Providence in the second round of the playoffs.
Quotes
Colin McDonald discusses the disappointing end to the season: "Can't question the effort of these guys, especially all year. We talked about it all year with you guys, we've never felt like we were out of it. I really did believe we were going to win tonight. I just really think we were gonna get it, but we fell short. We have to give credit to those guys over in that room. That's a good team over there, and they got some chances and they took advantage of it. It was a really hard fought series for sure. It's disappointing. I don't want you to think that we were just happy that we got in. It's disappointing. Again, not that we were getting ahead of ourselves, but our end goal was to win a cup and I thought we had the makeup to do that here. With the year we had, and coming back in the series, I really thought we had it. It was a heck of an effort by all the guys, but we fell short. That's sports."
3 Stars
1. Tom Gilbert (HER) - 2 Assists, +3
2. Pheonix Copley (HER) - 28 saves on 30 shots, Win
3. Taylor Leier (LV) - Goal 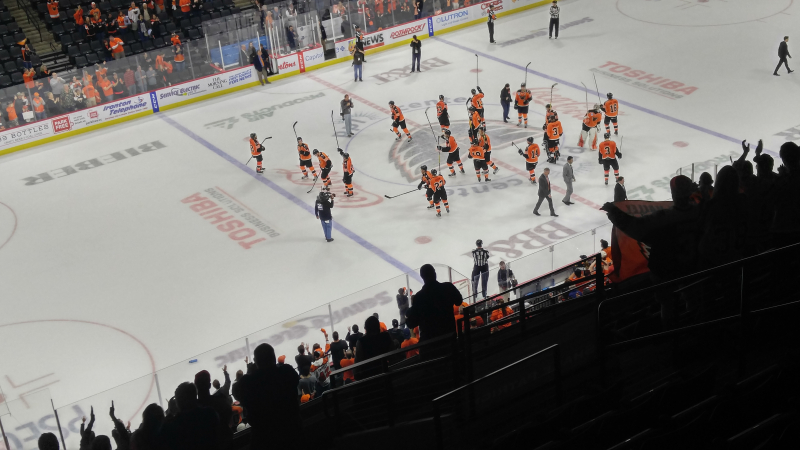 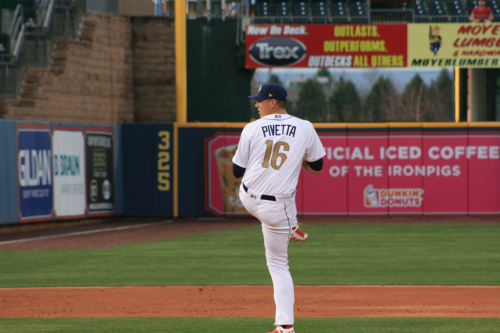 There was no mention of snowballs or wristbands or batteries. There was only praise.

Philadelphia proved to be the perfect host to the NFL Draft as it seeks a new home after their falling out with Radio City Music Hall two years ago, and the often criticized fans of the city were the shining stars of the weekend.

The 2017 NFL Draft came to a close on Saturday, and the Eagles used the weekend to add eight new players through their selections.

If the pre-draft hype is all about the potential destinations of the top players available, the post-draft hype is about evaluating how a team chose to approach the draft, even if it is way too early to project how a player's future will be or to assign a grade.

That said, the Sports Talk Philly staff attempted to grade the Eagles draft and gave their thoughts on the weekend as a whole for Howie Roseman, Joe Douglas and company.

The 2017 NHL Draft wasn’t going to have the headline players there were in 2016 or 2015. Chances are there wasn’t going to be an Ivan Provorov on the board that was so close to NHL ready as the Top 10 was rounded out and the middle picks of the first round were selected.

So when the Flyers were projected to pick 13th overall, it was comparing apples to oranges essentially. There would be a nice, quality prospect available, but nobody to get overly excited about immediately. There would be the usual development process and the excitement, in the upcoming season at least, would be more about the kids from drafts in 2013 and 2014 getting closer to playing in the NHL.

And then Saturday night happened and the Flyers luck changed. The lottery handed them a Top 3 pick at second overall. And suddenly, the Flyers were gifted a top prospect that could be a game-changer in the long run and NHL ready next season.

The Eagles made eight selections out of the 253 made in the NFL Draft this weekend in Philadelphia, and put the focus on several particular positions. They drafted two defensive linemen, two cornerbacks, two wide receivers, a running back and a safety/linebacker.

There was a common theme to these picks: upside and potential. While their impact may not be felt in the immediate future, the Eagles felt that they at least set the stage for the future.

Los Angeles, CA  — Going into last night's game against the Los Angeles Dodgers (13-12), the Philadelphia Phillies (11-11) were looking to tie the series at two games apiece. For most of the game, it seemed that the Phils would secure the win. That all changed in the ninth inning. Phillies starter Zach Eflin threw seven excellent innings, allowing only two runs on four hits. Joaquin Benoit pitched a scoreless eighth and handed the game to unofficial closer Hector Neris. He promptly allowed back-to-back-to-back homers to tie the game, and it was a runner that he had allowed to reach base that ended up scoring the winning run. To say the ninth inning was painful would be an understatement. It's further proof that the Phillies do not have a reliable closer, despite manager Pete Mackanin's claims that he has two pitchers (Benoit and Neris) that could fit that role.

There were a few positives on the offensive front. Rookies Brock Stassi and Andrew Knapp each homered, combining for four RBI. Knapp's home-run was the first of his Major League career, and the catcher finished a triple short of the cycle. Freddy Galvis extended his hitting streak to 11 games. However, there were plenty of opportunities to score more runs that were squandered. Ultimately, the bullpen was to blame, not the bats, but one can only wonder if this game would have ended differently if the offense had been able to put a few more runs on the board. 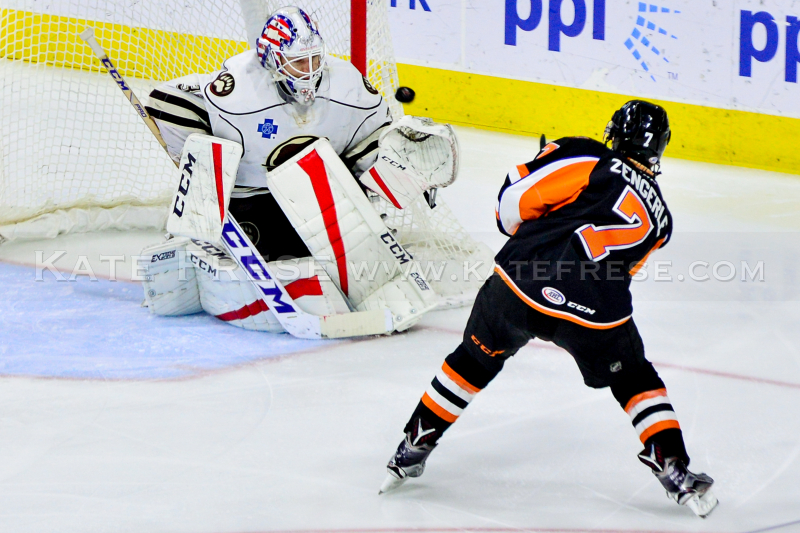