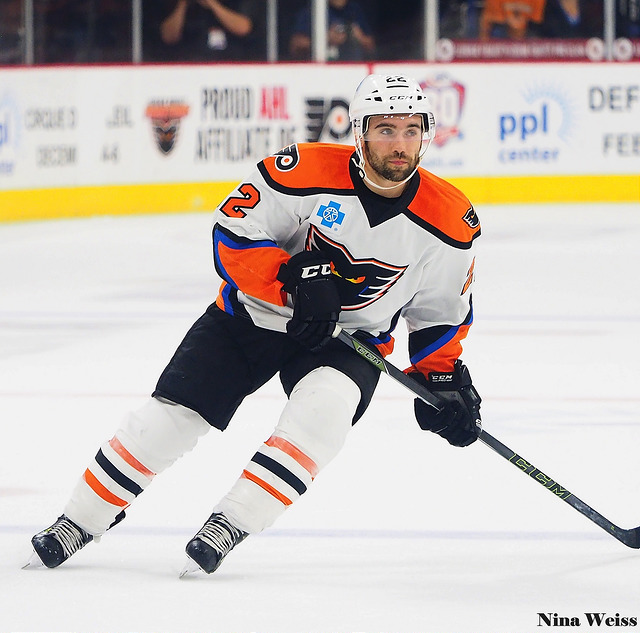 The Lehigh Valley Phantoms finally got some puck luck to go their way, winning Game 3 of their first round playoff series against the Hershey Bears, 2-1, in overtime.

A goal on a slap shot from center ice, plus a blocked shot leading to a breakaway in overtime would be the difference, as the comeback kids struck again after being down 1-0 after two periods with their season on the line.

Lehigh Valley came out sluggish to start the first period of a do-or-die game on Wednesday night, letting the Bears walk all over them for the first five minutes. The Bears came out looking to send the Phantoms home, pressuring Martin Ouellette, who was 0-2 in two career starts versus Hershey. Ouellette had given up a combined six goals on 13 shots in those two previous starts, but held strong through the first 20 minutes, making nine quality saves to stave off the pressure.

Even after being dominated for the first time in the series, Lehigh Valley tied the Bears in shots at nine in the first, and had a few quality chances themselves. Pheonix Copley stayed strong at his end of the ice however, not allowing the Phantoms to score. It marked the fifth period out of seven in the series that Copley had pitched a shutout for Hershey.

The Bears looked to give their star goalie a lead, gaining the first power play of the game. Andy Miele got sent off for hooking at the 19:35 mark of the first, and the Bears went to work. Forcing Ouellette to make a save at the horn, Hershey's man advantage was buzzing for the first 24 seconds of their 2 minute time frame. 1:36 of that would carry over to the middle frame.

The Phantoms killed off a power play for Hershey that carried over into the second, and used the momentum to change the pace in the game. They started to out-chance the Bears again, but for the third straight game the puck luck would not go their way. Countless shots wide or up over the net highlighted the frame, including a Chris Conner wraparound that was put through the the crease with the net wide open.

The lone goal of the period exemplified this trend, as a bad turnover off a missed shot by Greg Carey gave Hershey an odd-man rushes up the ice. The Bears had a 3-on-1 from their own blue line, with Stanislav Galiev bringing the puck up ice himself. He looked across to his teammates that were on the rush with him, trying to throw Ouellette off of what he was about to do. When Galiev got to the dot on Ouellette's blocker side, he pulled up and lasered a hard wrister past the right pad and blocker of the Phantoms netminder.

Again the Phantoms, despite controlling pace, were losing the game and they would have 20 minutes to try to tie the game and save their season.

The Phantoms came out in the third with that thought in mind, and were able to extend their season for at least a little longer. Just 37 seconds into the period, T.J. Brennan hit Colin McDonald with a breakout pass to center ice. McDonald, seemingly trying to just fire the puck into the zone, blasted a slap shot toward the Hershey end. His shot rose over the shoulder of defenseman Tyler Lewington, and fell right down into the net behind Copley. The Phantoms celebrated, taking their first huge break of the series in stride.

With just one penalty having been called the whole game, the refs tucked their whistles away for the final 19 minutes of regulation. Both teams seemed to commit minors against one another, but nothing was called. The biggest came when Lewington cleanly hooked the stick of Scott Laughton while the Phantoms were on a 2-on-1. The hook saved a goal and kept the game tied at 1-1, which is the way it would stay heading into the second overtime session of the three games played.

This time, however, the bounce would go the Phantoms way. The Bears were buzzing in the offensive zone early in sudden death. Hershey was cycling the puck, and then tried a shot from the point that went off the right shin pad of a turning Andy Miele, who sacrificed himself to block the shot. The puck kicked up to Chris Conner, and away he went on the breakaway from his own blue line.

Conner got in all alone on Copley, and made him make the first move. With a head fake to the glove side, Conner caught Copley leaning, and then fired to the blocker side. The shot beat the Bears goalie, sending the Phantoms bench onto the ice in celebration as the Phantoms forced a Game 4 on Saturday night in Hershey.

Game 4 is Saturday night from Giant Center in Hershey at 7 p.m.