Eagles Flyers Phillies Sixers About Us Write For Us
Could Lonzo Ball fall to Sixers? Report says he must wow Lakers in workout
Making the case for Jayson Tatum at No. 3

Flyers Should Give Stolarz His Chance at NHL Level 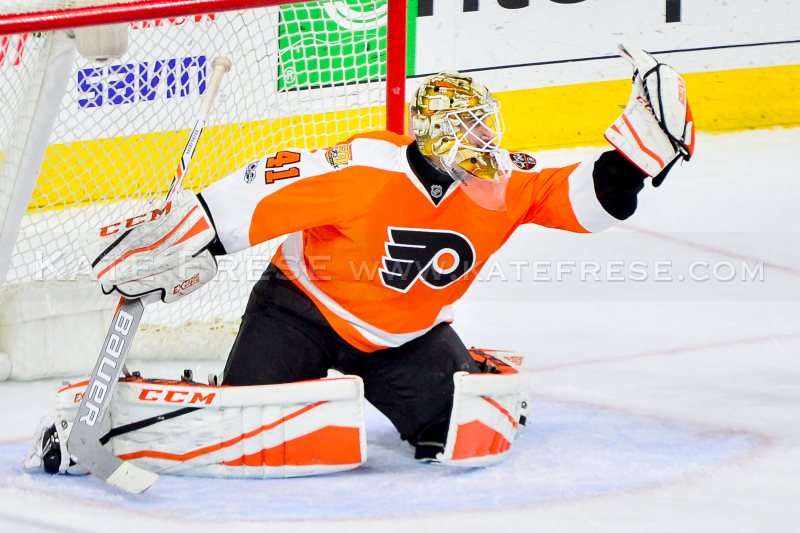 The Flyers perpetual struggle to find a franchise goaltender has been tragic at times, and comedic at others.

We have seen promising players like Sergei Bobrovsky traded before hitting his prime, reclamation projects like Steve Mason and Michal Neuvirth fail to reach their potential, and we even saw Michael Leighton, of all players, take the team to a Stanley Cup Final.

In between there were names like Antero Niittymaki, Brian Boucher -- on three  different stints -- Roman Cechmanek, John Vanbiesbrouck, and Ilya Bryzgalov. However, none of these players have been able to to lock down the starting goaltender job in the long term for the Orange and Black.

In the coming years, the Flyers should finally solve the seemingly never ending dilemma in net, with arguably the best group of goaltending prospects in the league with Felix Sandstrom, Merrick Madsen, Matej Tomek, Ivan Fedotov, and two-time CHL goaltender of the year Carter Hart.

The Flyers most experienced goaltending prospect, Anthony Stolarz, may be in the full-time plans for the Flyers as soon as next season.

Drafted in the second round of the 2012 Draft, Stolarz has had a varied course to the NHL.

When Stolarz was drafted, he was playing in the NAHL for the Corpus Christi IceRays. After being drafted, he jumped to the collegiate level, playing one season with the University of Nebraska-Omaha.

With playing time hard to find, the following season Stolarz moved to the OHL to play with the London Knights. Stolarz spent two seasons in London where he solidified himself as a solid goalie prospect stopping over 92 percent of the shots he faced over 55 games.

Stolarz would then make the leap to professional hockey, joining the Lehigh Valley Phantoms of the AHL, where he has continued to show promise, adjusting well to the professional level. Stolarz has played 107 games for the Phantoms over the past three seasons, posting a 48-40-11 record, including going 18-9 last season for the Phantoms.

Trending: Busy Month of June Ahead for Flyers

Stolarz has learned how to win in the pros, and then was on display when he played his first minutes in the NHL this past season. Stolarz played seven games for the Flyers last season, giving the Flyers their best goaltender play of the season, albeit in a small sample size.

Stolarz proved in his seven games that he can play at the NHL level. Whether playing in relief or getting the start, Stolarz showed that his long road to the NHL was worth it. He provided to be a reliable goaltender in his seven games, and given the team's uncertainty at the goalie position entering this season, should be among the players on the final roster.

Neither Mason nor Neuvirth did much to impress last season. Stolarz solidified the back end in a way that the other two struggled to, but again, in a small sample size. Stolarz may have played fewer games, but it is not like he was playing his games rested. Stolarz played frequently for the Phantoms whenever he was sent down, then he would provide stellar play whenever he was called up in the NHL without missing a beat.

Stolarz has a lot of desirable tools for an NHL goalie. He brings mammoth size, standing 6'6" and weighing 210 pounds. He is not flashy, but knows how to play angles to accentuate his size and take away shots similar to Stanley Cup-winning goalie Matt Murray. Stolarz is also comfortable coming out of the net to play the puck.

The 23-year-old from Edison, NJ has done the work, now it is time to see if it paid off. Stolarz may not turn out to be the answer to the Flyers' goalie woes for the long haul, but they will never know what he can be if he does not get more NHL experience. The team was clearly hesitant to put him in games last season, letting Mason play a hefty amount of games without breaks when Neuvirth got injured instead of relieving him with Stolarz. When Stolarz got on the ice, he showed the Flyers that he was ready.

With some games and success under his belt, and an opening behind Neuvirth with Mason not expected to return, the Flyers should stop hesitating with Stolarz and let him enter next season as the team's backup to continue to mature and adjust to life in the NHL.