Eagles Flyers Phillies Sixers About Us Write For Us
Velasquez, Cole square off as Phillies look to snap 4-game skid against Nationals
Five memorable Sixers moments from the 2016-17 season

Cesar Hernandez: 'I want to be second baseman of the future' 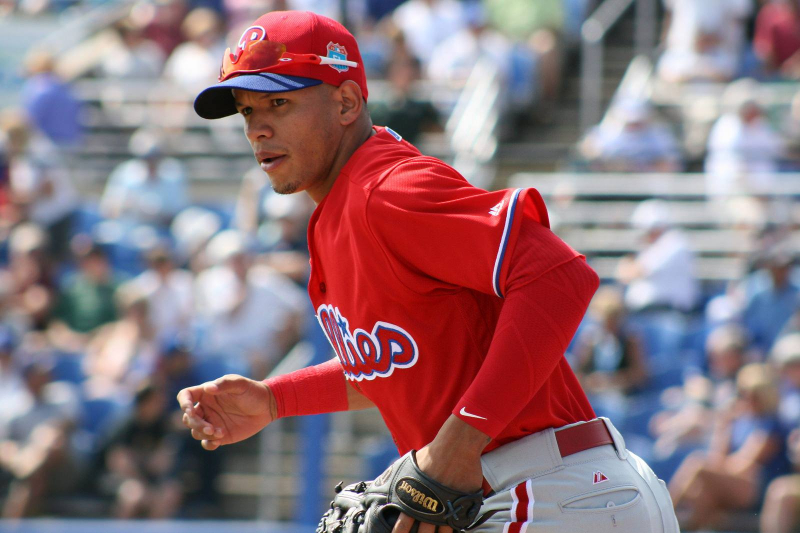 While the Philadelphia Phillies as a whole aren't off to a strong start in May, second baseman Cesar Hernandez has remained red-hot into the second month of the 2017 season.

Even with prospects Scott Kingery and Jesmuel Valentin having strong seasons in the upper levels of the minor leagues, Hernandez told Matt Breen of The Philadelphia Inquirer that he hopes to be the team's long-term second baseman:

"I want to be the second baseman of the future," Hernandez said. "I think it's important that they see me as a good player and appreciate my effort. But obviously, it's not up to me. It's their decision. If they see the results of my work, then that's great. But I can't control it."

Based off of the results of Hernandez's work over the course of the last year, it would be pretty hard for anyone to usurp him at second base. Behind a strong second half, Hernandez had a breakout season a year ago, in which he slashed .294/.371/.393 and posted a 4.4 WAR (per Fangraphs). He's followed that up in 2017 by hitting .333 through his first 120 at-bats of the 2017 season and cutting down on the mental errors on the basepaths that plagued him a year ago.

Hernandez playing well isn't the only thing that's going to determine whether he remains the team's long-term second baseman. Valentin has cooled off after a hot start, but he looks as though he will be in the picture at the major league level in 2018, probably as a bench piece. Scott Kingery, who is playing for Double-A Reading, hasn't cooled off, as he's slashing .291/.380/.605 with six home runs and 18 RBIs through his first 86 at-bats of the 2017 season.

Trending: For Phillies, strong organizational second base depth is a good problem to have

It's possible that the Phillies will look ahead and realize that because Kingery is further away from free-agency, he fits the team's timeline better and look to capitalize on Hernandez's value this trade-deadline. They did make him available last offseason, albeit at a price that was reportedly 'very steep.' Perhaps if Hernandez continues to play this well more teams will be interested in meeting general manager Matt Klentak's high asking price for him.

As Hernandez said, who the future second baseman is isn't up to him. One of the basic principles of spots psychology is to only worry about things that you can control. Hernandez can't control the production of Valentin or Kingery, but he can control his own production, and he's done a pretty damn good job of doing so over the course of the last calendar year.