Eagles Flyers Phillies Sixers Union About Us Write For Us
Phillies open 7-game homestand against Hoffman, Rockies
Phillies prospect Scott Kingery powers his way to EL Player of the Week

The Phillies are on pace to lose over 100 games 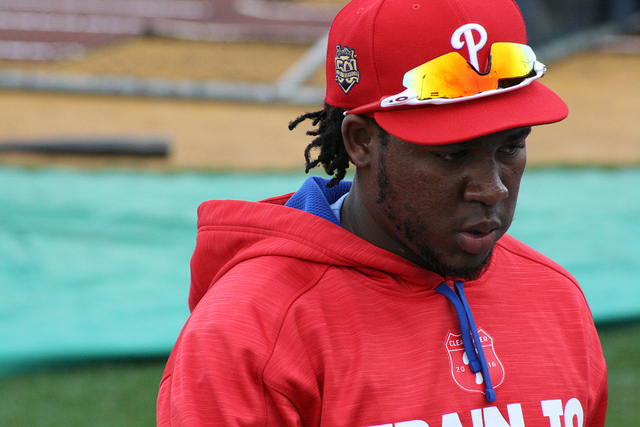 Maikel Franco is among those on the Phillies off to disappointing starts. (Frank Klose/Sports Talk Philly)

As 6 ABC's Jeff Skversky noted on Twitter, after Sunday's loss to the Pittsburgh Pirates, the Phillies record stands at 15-26. If you extend their current winning percentage of .366 out to a 162-game season, the team would lose 103 games:

Perhaps the difference between a year like 2015 and 2017 is that in 2015, losing that much served the purpose of finally convincing the organization that major changes, both on the field and in the front-office, were required. In 2016, the Phillies lost "just" 91 games, and when you coupled that with the additions of some veterans this offseason and the expected progression of a young team, many thought the Phillies would be moving closer to a .500 season.

In fairness, the Phillies schedule hasn't been easy thus far. They were swept by the Texas Rangers last week, who are 9-1 in their last 10 games. They've also played the Chicago Cubs, Washington Nationals and Los Angeles Dodgers -- probably the three most talented teams in the National League -- in 19 of their 41 games. The Phillies aren't scheduled to play the Cubs again until August and won't see the Nationals or the Dodgers until September, so perhaps they are reaching a point in their schedule where they can make up for their early season struggles.

Regardless of who they play, there's reason to think they will begin to experience some positive regression. The bullpen can't be as bad as it has been the first 41 games all year. Cameron Rupp and Tommy Joseph have bounced back in May after starting the season slowly, and Odubel Herrera and Maikel Franco may be next. From a starting pitching standpoint, the team got Aaron Nola back yesterday, and Jerad Eickhoff has pitched below his capabilities thus far this year.

If it is any consolation, the Phillies' minor league affiliates are all playing at a high clip. The Single-A Clearwater Threshers are tied for the lead in the Florida State League North, the Double-A Reading Fightin' Phils are 23-15 and the Triple-A Lehigh Valley IronPigs have the most wins in the International League. This offers hope for the future of the Phillies, even if their current team has been disappointing.