Eagles Flyers Phillies Sixers About Us Write For Us
VIDEO: Dylan Cozens hits longest homer in Coca-Cola Park history
What if Pete Mackanin Was Given the Red Sox Job prior to 2012?

The Phillies probably should have retained Charlie Morton

This past offseason, the Philadelphia Phillies declined Charlie Morton's $9.5 million option for the 2017 season, choosing to let him walk and sign with the Houston Astros after a serious hamstring injury limited him to just three full starts in 2016. So far in 2017, it appears that general manager Matt Klentak erred in that decision.

After a win against the New York Yankees on Sunday Night Baseball yesterday evening, Morton is 5-2 with a 3.97 ERA in 45.1 innings this year. That level of production alone would have given the Phillies more stability in their rotation. But Morton's FIP (3.30) and xFIP (3.29) suggest that he's actually been even better than his traditional statistics suggest.

At age 33, Morton also seems to be throwing his fastball as hard as he ever has in his career:

Morton still throwing 98 mph on his 89th pitch. He's at 90 pitches through five

Morton strikes out Gregorious looking on 98-mph heat. That was his 97th pitch 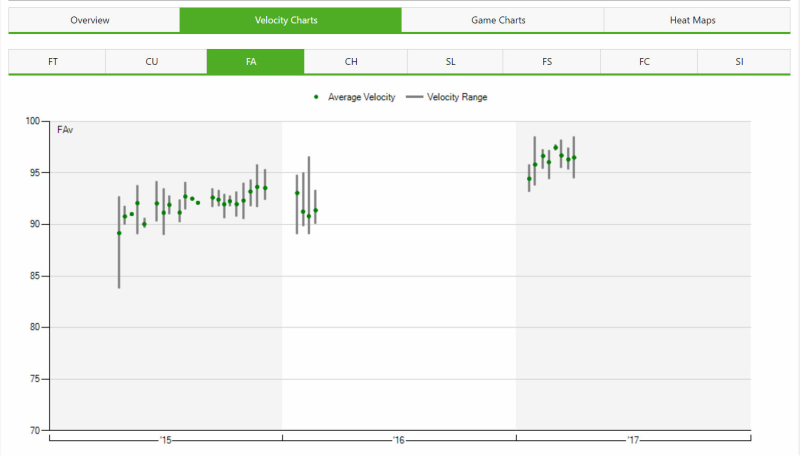 When you mix increased fastball velocity with his sinker and curveball, plus other pitches that he mixes in, it isn't hard to see why Morton has been successful thus far in 2017.

$9.5 million once seemed like a lot to guarantee Morton in 2017, but he ended up getting a two-year/$14 million deal, so to pay a little more in 2017 and only have to guarantee one season may have made sense. It looks like a serious bargain when you consider that the Phillies paid a seemingly inferior pitcher in Clay Buchholz $13.5 million to pitch just 7.1 (extremely ineffective) innings.

What Morton is giving the Astros is what the Phillies hoped Buchholz would give them in 2017, and even better than what Jeremy Hellickson has done thus far this year. Morton is pitching effectively right now and on pace to pitch nearly 170 innings in 2017. The Astros are a World Series contender this year, so they won't be trading him this summer. But if he was performing like this for the Phillies, he would draw trade interest, much like he was already starting to last April.

Instead, Morton is thriving in Houston, while Buchholz is out for the season, Hellickson appears to be experiencing some regression, Aaron Nola is on the disabled list and the duo of Vince Velasquez and Nick Pivetta hasn't pitched well.