Eagles Flyers Phillies Sixers About Us Write For Us
Phillies Rumors: Club may try Scott Kingery at different positions
Could Lonzo Ball fall to Sixers? Report says he must wow Lakers in workout 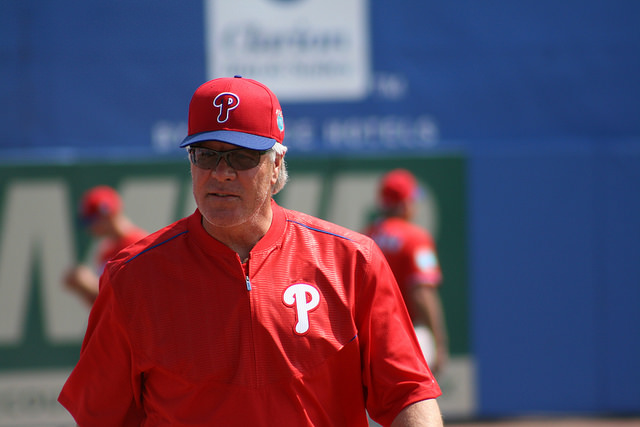 "We extended Pete two weeks ago. I don't remember the exact date. But everything I said about Pete two weeks ago still holds. I really like what he does, the way he works with the players. All the reasons we talked about two weeks ago, those are still the case. And two weeks of losing baseball doesn't change that. And the same with Bob McClure. I had to answer those questions at the beginning of the last homestand, I think Bob is very patient with a young staff. And he's done it before. These guys aren't taking the at-bats. They're not making the pitches. These guys are working their butts off trying to help these players and we still have a lot of confidence in them. And not only those two, but the whole staff."

On May 11, the Phillies announced a contract extension for Mackanin that restructured the skipper's contract for 2017 and gave him a new deal for 2018. The deal also includes a club option for 2019. The 65-year-old has managed the Phillies to a record of 178-228 since replacing Ryne Sandberg at the helm in 2014. This year, the Phillies boast MLB's worst record at 17-34, which puts them on pace for 108 losses.

McClure has received criticism for the nearly-complete collapse of the Phillies' starting rotation in May. Overall on the season, the whole staff has pitched to an ERA of 4.84, 14th among National League teams. Their overall ERA+ is 81, where anything lower than 100 is below average. The recent injury to Vince Velasquez will only compound McClure's problems with a struggling young rotation.

Klentak, though, will give time for his staff to turn it around. The Phils are still in the midst of a rebuild, after all. For Klentak to fire his manager and pitching coach two months into a season which had fairly low expectations to begin with would be to give in to pressure from impatient fans. And the Phillies aren't yet ready to give in.