While premise of Giles trade was strong, Phillies’ return not faring well enough 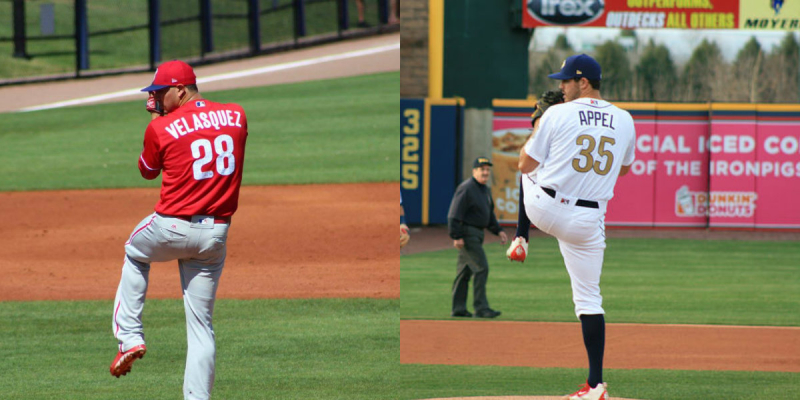 On April 14, 2016, Vince Velasquez donned the Philadelphia Phillies' red, Business Person Special jerseys and tossed a three-hit, complete game shutout. In that shutout, Velasquez fanned 16 San Diego Padres batters, leading some Phillies fans to think that he could be a core piece of their rebuilding team. Thursday, over a year later, Velasquez once again took the mound in the red, Business Person Special jersey, but the feeling as he left the game couldn't have been more different.

The feeling that you were left with is that while the premise of the Ken Giles trade was good, the return that general manager Matt Klentak secured hasn't played well enough.

Trending: The Phillies do indeed have interest in Bryce Harper, per report

No one is suggesting to pull the plug on Velasquez as a starter today, but if things continue to trend this way, that may be the smartest course of action for the team this offseason. Consider that Thursday was his 32nd full start with the team, and it was the 28th time that he's gone less than seven innings. It was the 15th time that he's failed to go six full innings. In 2017 alone, he's pitched seven full innings just one time in nine starts, yet he's thrown at least 94 pitches in eight of his starts. Perhaps Velasquez, who a scout once compared to the New York Mets' young starters, will figure things out as a starter, but nothing he's done this season would lead you to think he's on the path to doing that.

Velasquez and his 9.27 K/9 rate may be more suited to be a back-end reliever, but falling victim to big innings, having poor pitch location and seeming to be mentally fragile aren't exactly the ideal traits for a late-inning reliever.

What's more, after an elbow injury cost him the majority of the 2016 season, Mark Appel has struggled even more than Velasquez for the Triple-A Lehigh Valley IronPigs. In nine starts, the former No. 1 overall pick has a 7.59 ERA, along with a 6.82 FIP and a 5.56 xFIP (per FanGraphs). Appel, who the Astros selected ahead of Kris Bryant, seems like a near lock not to make his Major League Debut in 2017, and likely won't retain his 40-man roster spot after the 2017 season. In short, he may never pitch a game for the team.

Popular: Billy Wagner happy for Bagwell, hopes to get call to Hall himself

Meanwhile, outfielding prospect Derek Fisher, who was initially supposed to be in the deal instead of Appel, is slashing .314/.379/.554 with 10 home runs and 27 RBIs for the Triple-A Fresno Grizzles. The Phillies may be deep in outfielding talent, but if they had a mulligan, there's no doubt that they would rather have Fisher than Appel.

Currently, the biggest bright spot for the Phillies in this deal is 22-year-old righthander Tom Eshelman, who has had a tremendous start to 2017. After going 3-0 with a 3.10 ERA in his first five starts of the season at Double-A Reading, Eshelmen has been dominant in two starts for the IronPigs, posting a 0.78 ERA.

Here's the problem, Eshelman can't end up being the most successful part of the deal. An American League scout touted Eshelman's world-class command to our Nick Mandarano last summer, but cautioned that his upside isn't particularly high:

An American League scout told SportsTalkPhilly.com that “[Eshelman’s] ceiling is as high as his floor.” The scout described Eshelman as a “finesse pitcher with serious, historic command, but mediocre stuff.” The scout repeatedly emphasized and praised Eshelman’s control.

That Eshelman is performing well is a good thing. He figures to be a stable piece at the back of the next very good Phillies rotation. But there was hope that Velasquez and Appel would be at the top of that rotation, or at least in the middle, neither of which seem likely right now.

Harold Arauz, also acquired in the deal, has pitched well this season between Clearwater and Lakewood, and has a 1.80 ERA in 10 relief appearances to show for it. That's impressive production for the 21-year-old, but he's not close to the major league level, so it's too early to call his inclusion in the deal a success.

The good news is that Arauz's tenure in the organization has already been better than Brett Oberholtzer's brief run with the team. While Oberholtzer told an incredible story of attending the 2008 World Series parade even though he was in the Atlanta Braves organization at the time, he posted a 4.83 ERA in 26 appearances and was eventually designated for assignment and claimed by the Los Angeles Angels last August.

Evergreen: Curt Schilling says he doesn't believe that he's a Hall of Famer

None of this is to say that Giles has been perfect in Houston. His 2016 season was a mixed bag, though advanced metrics like FIP and xFIP suggest he was unlucky. His 3.44 ERA in 2017 isn't great, but his 1.83 FIP and the fact that he's converted on 12 of 13 saves attempts are. And really, Giles could have retired after last season and it wouldn't have affected how the return the Phillies got for him performed.

Regardless of how the Phillies bullpen has struggled in 2017, the idea of trading Giles after the 2015 season was correct. Even though he had just turned 25 and is under team control through 2021, a rebuilding team having an elite closer is an unnecessary luxury. In a world where the Astros bullpen blew what would have been the clinching game in the 2015 ALDS against the eventual World Series champion Kansas City Royals, there was certainly a market for Giles. And the Phillies front-office attempted to cash in on that market.

But besides the decision to select Mickey Moniak with the No. 1 overall pick, trading Giles is the biggest transaction that the duo of Klentak and president Andy MacPhail have made thus far. The final verdict on who won the trade, or how the Phillies side of the deal panned out, is years from being decided. But nearly a year-and-a-half removed from the deal being completed, the return for Giles seems underwhelming.