How the Phantoms Roster Shapes Up for the 2017-18 Season 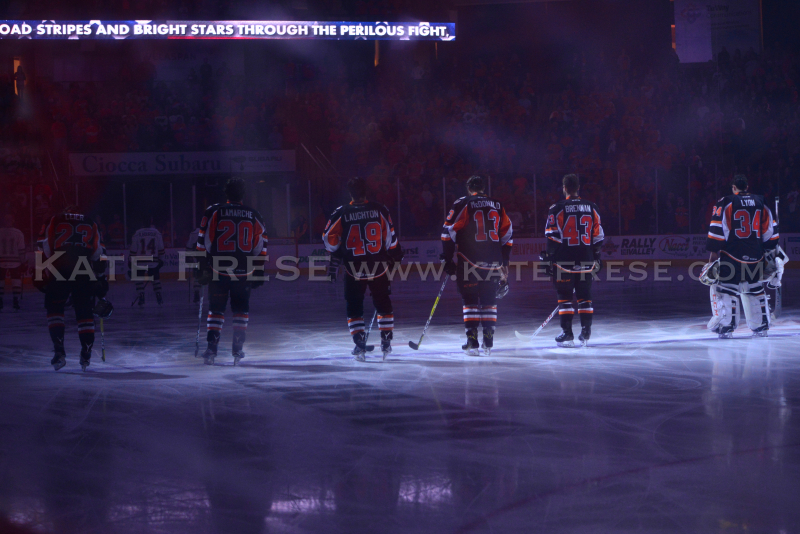 The Phantoms made the Calder Cup Playoffs for the first time since 2009 this past season. The Phantoms dropped the first two games at home in hard-fought, close games. They won the next two on the road to force a Game 5 at home, but unfortunately they were unable to come all the way back and dropped the deciding game of the series.

Flyers GM Ron Hextall made it an objective when he joined the Flyers executive team to return the Phantoms to a winning program. He believes it is necessary for the optimal growth and experience of prospective players.

Since then, Hextall has made the Phantoms into a diverse mix of young up and coming talent and veteran players, at both ends of the ice, backed up by prospective goaltenders looking to become an NHL starter. Hextall believes that nothing promotes development like a winning environment and he has created that opportunity with the current Phantoms players.

Not since the Calder Cup winning team of Mike Richards, Jeff Carter, Patrick Sharp and Antero Niittymaki have the Phantoms been so organically built for success. During much of Bobby Clarke and Paul Holmgren eras, draft picks were bargaining chips at the trade deadline to land the next big deal. Most years the Flyers did not keep their first or second-round picks, this heavily depleting the farm system of top prospects to play for the Phantoms.

That is not the situation any longer. In fact, there are so many young prospects that the 2017-18 Phantoms need to graduate some players to the NHL just to make room for the next crop of young players in the system. That is a very good problem to have and something the Flyers organization has not had in a very long time.

On defense, the Flyers have so many high end prospects there are not enough spots on the starting rotation for them all.

Almost a third of the current Phantoms players have contracts that must be addressed in the offseason. There are three unrestricted free agents: Boyd Gordon, Andy Miele and Chris Conner. In addition, there are six players who are restricted free agents: Alex Lyon, Scott Laughton, Anthony Stolarz, Taylor Leier, Cole Bardreau and Mark Alt. 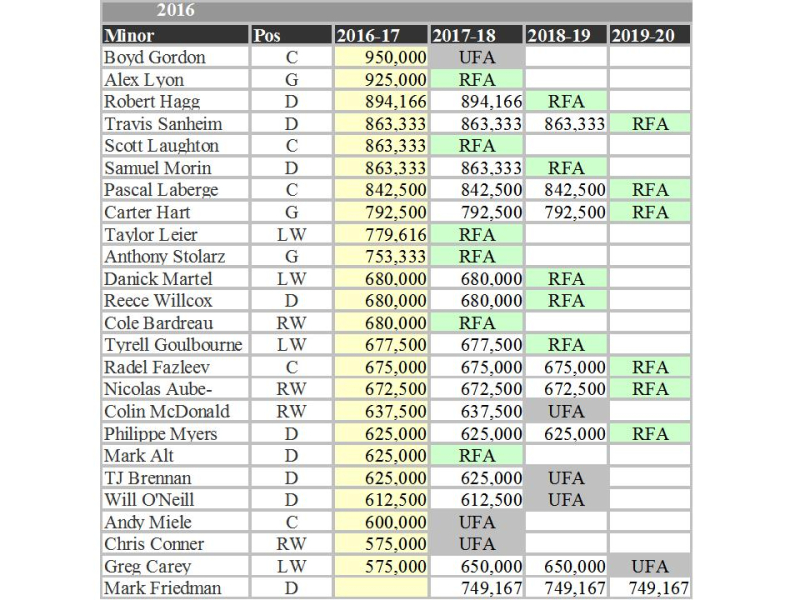 Boyd Gordon – Gordon was signed to be a penalty kill and faceoff specialist for the Flyers. He scored a goal in his first game, but was pointless in his next 12 and was twice injured leading to being waived to the Phantoms. He played a few games for Lehigh Valley, but was injured again and on injured reserve for rest of the season. He will likely not be resigned.

Andy Miele – Miele was third on the Phantoms in scoring with 10 goals and 42 assists for 52 points. He was a minus player at minus-18. He is 29 and a perennial high-scoring center at the AHL level, never scoring below 50 points. In a surprising announcement, Miele has signed a contract to play in Sweden and will likely not be returning. Technically, the Phantoms could still make him an offer that he could accept, but Miele seems to have his sights set on playing in Europe.

Chris Conner – Conner is another AHL veteran who consistently puts up solid scoring totals.  He was second on the Phantoms current roster with 54 points, 22 goals and 32 assists. The experienced winger will also most likely be extended given the lack of prospects on the right side. Conner is 33 and there are rumors he may be following Miele to Sweden, otherwise, he will likely be re-signed.

Alex Lyon – Lyon was signed as a free agent out of college last year. He was the top free-agent goalie from the college ranks. The Flyers were so interested they agreed to burn the first year of his contract immediately. He was steady all season for the Phantoms, posting a record of 25-14 with a GAA of 2.73 and save percentage of .911. He led the Phantoms with four shutouts and should be re-signed.

Cole Bardreau – The 23-year-old is in his second full season with the Phantoms. He has amassed a respectable 23 points, down slightly from 30 the prior year. He has mostly played a fourth-line role on the much-deeper team this season. Bardreau is very well respected by his teammates as well as his coach Scott Gordon and Hextall. Look for the Phantoms to re-sign him as well.

Mark Alt – Alt came to the Flyers in a trade with Carolina and nearly broke into the NHL on a few occasions. Injuries and timing kept him from making it. He has however been a very solid AHL blueliner. He does not put up big numbers, but he is a steady, calming, stay-at-home defender. With the recent draft crop of defenders graduating to the Flyers, the Phantoms will need his services as a regular and a veteran mentor to younger players. He will probably be re-signed, like to a multi-year deal.

Taylor Leier – 23-year-old Leier had another solid season for the Phantoms, finishing with 11 goals and 33 points. The left wing is expected to resign with Lehigh Valley. A one-year contract seems to make sense to help determine what Leier can do. He did play well in his 10-game call-up to the NHL this year. He really showed off his speed and play with and without the puck. A one-year deal leaves him with two years of RFA time left over, should he take a significant step forward allowing him to push for a multi-year deal after next season.

Scott Laughton – Laughton looked to likely make the Flyers roster out of camp, but then he was injured and things solidified by the time he was ready to play so he was sent down. While he may have been frustrated at not getting a shot in the NHL this season, he has made significant strides in his two-way game at the AHL level. The 22-year-old, former first-round pick is in a strong position to push for a roster spot again. Laughton may start with the Phantoms again, but the Flyers could quickly turn to him as one of the first forwards in line for a call-up. Look for him to sign for 1-2 years.

Anthony Stolarz – Presumably, Hextall extended Michal Neuvirth in order to protect Stolarz for the expansion draft. Stolarz could start the 2017-18 season with the Flyers as the backup goalie in the fall. Among the young netminders in the Flyers system, Stolarz is the most ready to assume a role in the NHL. There are other goalie prospects with potentially more skill and higher ceilings, but they are not yet at the stage to assume the net at the NHL level.  Stolarz will most likely sign a multi-year, two-way contract, leaving the door open for a return to Allentown if the Flyers do decide to sign a free-agent goalie at the NHL level.

There are also a handful of prospects assumed to be part of the Phantoms roster in the coming season that did not play during the 2016-17 season.

Philippe Myers - Myers was undrafted, but came to Flyers development camp two years ago and was so impressive, he was signed to an entry-level contract. The 20-year-old is a 6'5", 209-pound right-handed blueliner, and at the time, he had not made much of an impression in his first two years of junior hockey posting a total of 12 points. After returning to juniors, with a contract in hand, he exploded on the scene, putting up 17 goals and 45 points and was a plus-52 for the season. He missed half of the past season due to having two separate concussions, but he still managed to tally 35 points in 34 games and was plus-21.  He also made Team Canada at the WJCs and looked very good, tallying three points in four games before receiving his second concussion.

Mark Friedman – Friedman finished his college career this spring and signed an entry-level contract and reported to the Phantoms. The 21-year-old blueliner is more of an offensive-minded player, but he is not deficient as a stay-at-home guy if needed. He is another right-handed defenseman, which the Flyers have been sorely in need of. Friedman is a solid skater with a strong shot and can help the Phantoms power play.

Mikhail Vorobyov - The Russian center drafted in the fourth round in 2015 made a huge impression in the last World Junior Championships. He lead all players with 10 assists in seven games. His KHL contract expired a few weeks ago and he immediately expressed interest in coming to North America. Not long after, he was signed to an entry-level contract and will be reporting to camp in the fall and most likely be playing with the Phantoms on opening night.

Samuel Dove-McFalls - Selected in the 2015 NHL draft by the Flyers, Dove-McFalls was taken in the fourth round with the 98th overall pick. He is 20 and therefore eligible to play with the Phantoms. He would bring some needed size at 6'2" and 207 pounds. Dove-McFalls scored 17 goals and 53 points in 65 games in his final junior season. He was also a plus-21. Dove-McFalls has not been signed yet, which doesn't make him a lock for the Phantoms just yet, but could be one of the last entry-level contract additions made.

In addition to the possibility of Stolarz making the leap to the NHL ranks, there will be two openings on the Flyers blue line for current Phantoms defensemen under contract. Michael Del Zotto and Nick Schultz are not returning to the Flyers next season and their roster spots need to be filled.

Robert Hagg and Sam Morin are expected to make their full-season debuts in 2017-18 with the Flyers, after getting a taste of the NHL for one game in April. Friedman and Myers would be the top candidates to take their spots in the Phantoms lineup.

The Phantoms will have to sign a free agent goalie to backup Alex Lyon for the upcoming season, assuming Stolarz cracks the Flyers roster. 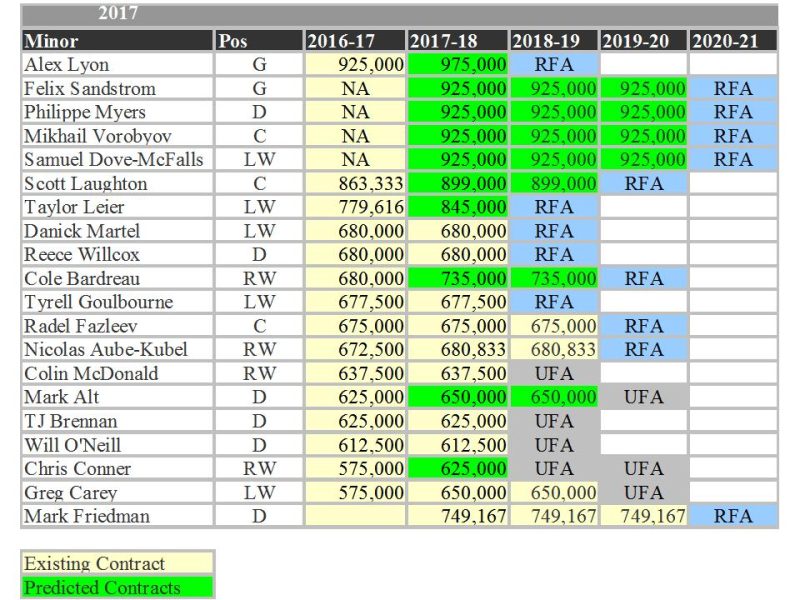 Using the restructured roster with new players and updated RFA/UFA contracts the Phantoms lines could look something like the below for forward lines and defense pairings. 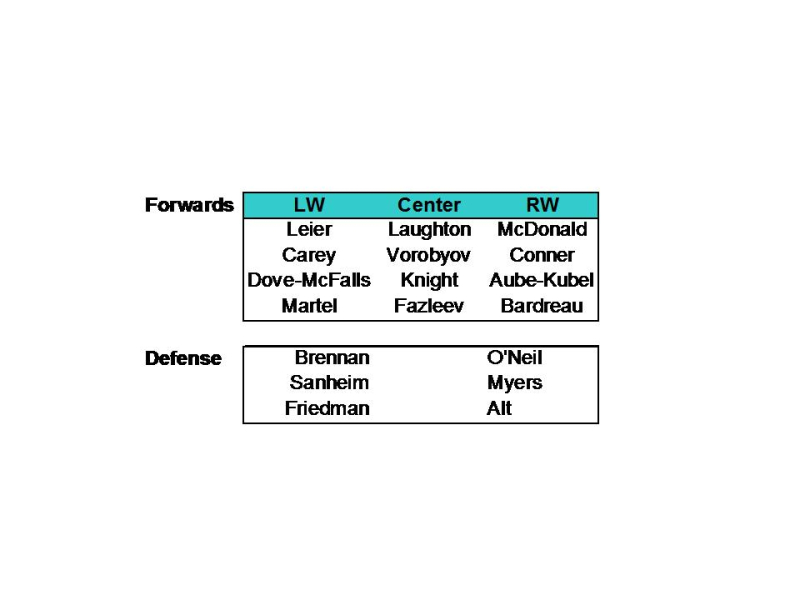