Once ranked the top prospect in the organization and 17th in all of baseball, Maikel Franco has struggled in his 2017 campaign so far. He’s slashing .216/.273/.352, placing him in the bottom ten in batting average of any qualified National League hitter and raising questions regarding a trip back to Lehigh Valley. A basic overview of his stats would be frightening, but delve a little deeper and there’s hope.

Franco’s BABIP sits at a measly .222, a drastic drop from his .271 clip last season. A BABIP so low is rare. In fact, Franco’s is ninth lowest in all of baseball. Using data from 2015 to date, here’s how Franco’s season compares. 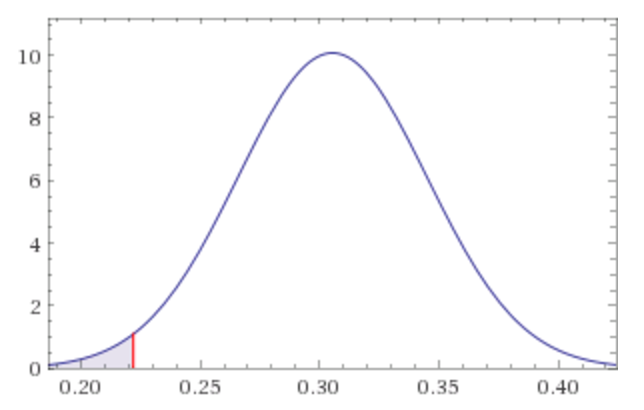 With this data, the probability of a hitter’s BABIP being so low is just 1.76%. Essentially, it’s incredibly unlikely a hitter performs so poorly, especially when considering the success he’s accumulated in his previous two seasons.

BABIP will fluctuate and of course there’s more room for variation in a small sample size like three seasons, but this is a significant fall off. Typically, an extremely high BABIP is expected to regress back towards the mean, which in this data set is about .305. Similarly, an extremely low BABIP is expected to sway back towards the average. No, he likely won’t raise it back to .300, but expect some rise. Logically, a higher batting average on balls in play will result in a higher batting average in general, particularly when the ball is put in play at a high frequency.

Franco’s strikeout rate is at a career-low 14.9%, almost five percentage points lower than Major League average (19.88%). He’s never been one to strikeout much as his career numbers at all levels frequently show. A decrease in an already low strikeout rate means he’s putting the ball in play at a remarkable rate.

When he does put the ball in play, he’s doing it somewhat impressively. His 22.0% line drive rate and 32.0% hard hit ball rate are both career highs, although neither too far from league average. Regardless, it’s an indication that Franco has been barreling up the ball better than ever.

A negative WAR (-0.4) and negative WPA (-0.71) aren’t pleasing, but keep in mind they’re strictly evaluations of past performance to date and have no prediction value for future performance. There’s no way to say for sure if Franco will return to his productive form, but there’s definitely plenty of evidence to believe his .216 batting average is more so a fluke than any of his previous seasons.