When it came to Brayden Schenn, many Flyers fans were unable to see the forest through the trees. So many fans regurgitated the wholly inaccurate talking point that all he did was score power play goals.

I have never seen a young, talented player so oft-maligned by the home fans as I saw with Schenn.

Why so many Flyers fans were so negative on him is something I never understood. Every month rumors would circulate of his upcoming trade. Most had him garnering minimal return.

The news of his recent trade was greeted with great fanfare and glee. Again, over and over it was tweeted that all he did was score power play goals and how he dragged the whole team down.

So, was it true? Was Schenn only good for scoring power play goals?

It was certainly true that unlike any other Flyer, Schenn was constantly moved up and down the lineup and across the three forward roles.

Schenn rarely went more than 10 games without being moved to a new line. Schenn was also typically paired, for at least a large number of games, with whoever was not part of the top-six forwards or “the untouchables” of the fourth line under Hakstol.

In 2015 and 2016 one of his more frequent linemates was Vincent Lecavalier. In 2015, the other linemate was one of R.J. Umberger or Sam Gagner. It was not until the second half of the season that he was primarily paired with Claude Giroux and either Jake Voracek or Wayne Simmonds.

In 2016, Hakstol made him a staple on the third line with Dale Weise, Nick Cousins or Matt Read most of the time. Occasionally, Travis Konecny would be on one wing as was Simmonds, but that was a rare occasion.

Even after having a breakout season in 2015, Hakstol quickly put Schenn on the third line and even played him on the fourth line this past season. He rarely saw any time on the top line where he saw so much success in 2015.

The constant line and position shuffling could certainly lead to inconsistent production at 5-on-5 play. Still, Schenn managed to nearly repeat his breakout season production. The majority of his 2016-17 goals did come on the power play, which was the impetus for the talking points. He still scored 25 goals and 55 points including seven game-winning goals, by far the most on the team.

However, only if you examine the 2016-17 season could you cite the fact that he only contributed when on the power play. If you look at the last 4 years worth of data you see a much different picture emerge, especially when you compare him to the other star talent on the Flyers.

Reviewing data for 2013 through 2016 Schenn was not only a balanced contributor, but he produced at similar or even higher rates than all star Flyers players.

This is hardly someone who “only scores power play goals” and puts him in line with Flyers elite level contributors. 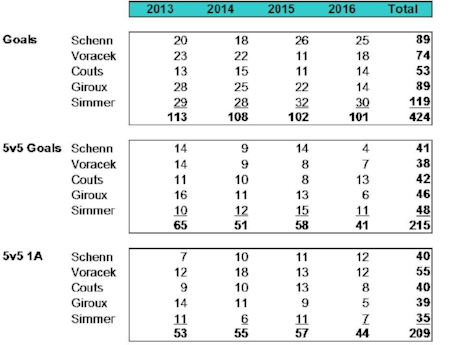 *The above chart again shows production over the past 4 seasons

From 2013 to 2016, Schenn scored 89 total goals. That ties him with Giroux. That may come as a surprise given the prevailing commentary regarding Schenn. It is also 15 more goals than Voracek and 36 more than Sean Couturier.

Looking at 5-on-5 scoring, Schenn tallied 41 goals, only five less than Giroux or a little more than one fewer goal per year at 5-on-5. Schenn has three more 5-on-5 goals than Voracek and one less than Couturier over that four-year term.

This is not to say that Hextall should not have traded Brayden Schenn. Getting two first-round picks was too good of a return to pass up. Especially for a player who supposedly “only scores power play goals.”

The Flyers offense will struggle to overcome the loss of Schenn’s production, especially since the Flyers are anticipated to have at least two rookie forwards making their NHL debuts. Oskar Lindblom and Nolan Patrick are expected to make a serious push to be on the roster on opening night and will be learning the game and most likely not producing big numbers. The picks that were the main return for Schenn are still years away from making the roster.

It will be several years before we can evaluate whether or not the trade was favorable to the Flyers. Schenn is only 25 and was a consistent producer for the Flyers regardless of what the uninformed masses said about him.

The return was too great to not make the deal, but the constant refrain that all he did was score on the power play was belied by that very return that made the deal too good to pass up. No team would have traded two first-round picks for a one-dimensional player.

Schenn’s production will be missed, that is without question. Even with the poor usage over the past three years, he still managed to contribute at a high level in terms of production.

Hopefully, in time, the trade will be seen as a positive for both sides. At a minimum, fans should see beyond the gossip and realize how Schenn was far more than just a power-play specialist for the Flyers in the past few years.

I've always liked Schenn - but he just didn't play defense sometimes at 5 v 5...invisible on offense at times, too.

Not sorry he's gone...someone will step up - and, hopefully, play consistent "D".