Eagles Flyers Phillies Sixers About Us Write For Us
The Sixers should bring back Ersan Ilyasova
Can Eagles Offensive Line Live Up to Growing Offseason Hype?

Excitement around Sixers reminiscent of when Cliff Lee returned to Phillies 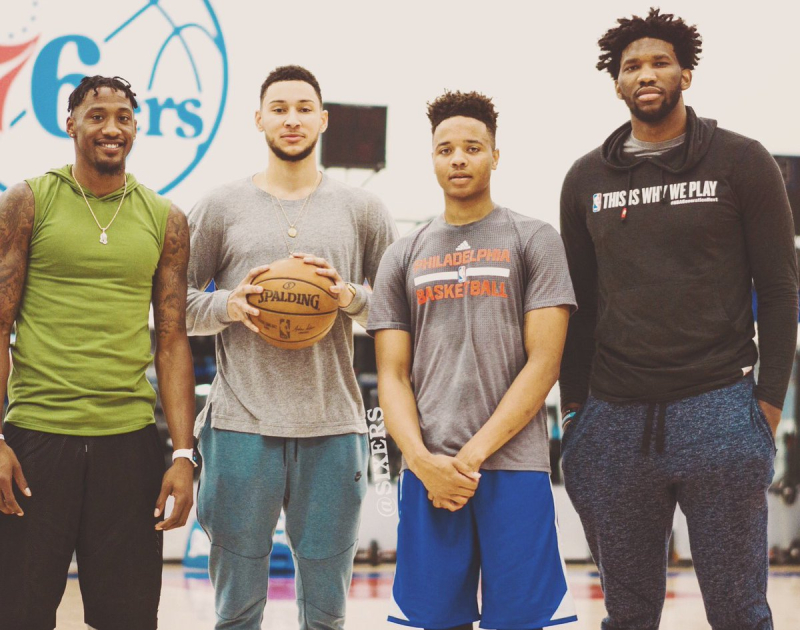 The addition of Markelle Fultz (third from left) has Philadelphia extremely excited. (@Sixers/Instagram)

When I was 15 years old, I hosted a YouTube show called "The Ka$h Kelly and AC Sports Report" (I know). On December 14, 2010, myself and my co-host, Anthony "AC" Cavallo, uploaded a video about Cliff Lee returning to the Phillies. I opened the video by saying that I hadn't slept the previous night because Lee's rather shocking return to the Phillies was "the greatest night of my life." AC simply responded by saying that he was "pretty damn excited."

That was a much simpler time in my journalistic career, but the excitement surrounding the Sixers' trade-up to the No. 1 pick brought me back to that video with less than 1,000 views, which was literally recorded on a playground below our high school.

I watched Allen Iverson drop 48 points on the Los Angeles Lakers in Game 1 of the 2001 NBA Finals. I watched the Phillies win the 2008 World Series. I watched the Eagles defeat the Dallas Cowboys 44-6 in Week 17 of the 2008 NFL season to clinch a playoff berth. And I watched the incredible comeback that the Flyers mounted against the Boston Bruins in Game 7 of the 2010 Eastern Conference Semifinals. None of those moments meant to me what Lee coming back to Philadelphia meant. The trade-up for the Sixers to acquire the No. 1 pick and eventually select Markelle Fultz is a moment that probably inspired a similar amount of goosebumps for many kids (and adults) in the Delaware Valley.

Trending: While they collect pageviews off a team they said wouldn't excist, history won't forget pundits of "The Process"

What made the Lee moment so special wasn't simply that the Phillies signed one of the best pitchers in the league. It was the build-up to the moment.

The Phillies would trade Lee -- and his $9.5 million salary -- that offseason, sending him to the Seattle Mariners. That move corresponded with a trade with that involved the Toronto Blue Jays and Oakland Athletics, in which the Phillies landed Roy Halladay. Make no mistake, Halladay was the prize that offseason. But, in theory, the Phillies could have made the trade for Halladay, while keeping Lee for at least the 2009 season. That would have allowed the team to have a rotation that featured Halladay, Lee and Cole Hamels.

Of course, things can only be so good in Philadelphia sports.

It may sound greedy, but Halladay's Cy Young winning 2010 season, in which he threw a perfect game in the regular season and a no-hitter in the NLDS, still ended with the Phillies sitting at home for the World Series. Naturally, Lee, who had been traded to the Texas Rangers that trade deadline, helped pitch his team into the World Series. He wasn't quite as dominant in the 2010 postseason as he had been the year before, but he posted a 2.78 ERA and pitched one complete game during the 2010 playoffs. This came after an unreal regular season, that saw Lee toss seven complete games and post a 7.0 WAR.

Lee became a free-agent that offseason, which seemingly set up a battle between the Rangers and the Yankees, who Lee had long alluded, for his services.

But a strange thing happened that offseason. Even though the Yankees reportedly offered Lee a seven-year deal, and the Rangers countered with a strong offer, a mystery team emerged. The Phillies were that mystery team, and eventually got Lee to take a discount and sign a five-year/$120 million deal to return to Philly.

The city of Philadelphia swelled with pride after Lee returned. Lee spurned the Yankees and the defending American League champions, all while forgiving the Phillies for trading him, because he loved his brief time in Philadelphia so much. While Lee's return set up a rotation of himself, Halladay, Hamels and Roy Oswalt, his choice to return to Philadelphia was so special because it signaled that the Phillies had become the most desirable team to play for.

Even as the 2017 Phillies march towards a 100-plus loss season, Philadelphia is again swelling with pride. This time that pride is coming from the Sixers.

The build-up to the Sixers' biggest acquisition couldn't be more different than that of the Phillies. The Phillies had won four consecutive division titles, two National League pennants and a World Series in the four-year stretch of 2007-2010. In the four-year stretch of 2013-14 to 2016-17, the Sixers lost 253 games. But the processes -- corny pun intended -- of becoming a great team in the MLB and NBA are completely different.

For four seasons, Sixers fans had to hear about how their team was embarrassing the NBA. They had to hear how Sam Hinkie was a con-man operating the greatest Ponzi scheme in sports history. They had to see the league, Jerry Colangelo and Joshua Harris eventually push Hinkie out. They listened to two year's worth of "Dario isn't coming over" and "Embiid will never play a game."

Popular: Who will be the Phillies manager in 2018?

But opinions that come from those with the shortest view in the room normally have expiration dates. Dario did come over, and Embiid did play. One of them should have been the 2016-17 Rookie of the Year. Ben Simmons, who the Sixers selected No. 1 overall pick in the 2016 NBA Draft, has as good of a chance as anyone to win the Rookie of the Year in 2017-18. Fultz isn't far behind.

In a city that so often spends time worrying about negative, often incorrect perceptions that other fans have of them, Fultz is the final piece in a young core that may allow the Sixers to become the envy of the league. Whether national or local fans and reporters were against "The Process" doesn't matter now. "The Process" has given the team an incredibly talented young core, one that can be supplemented with the team's ample cap room.

As it turned out, Lee's return to the Phillies signaled the last push in the greatest run in team history. The trade-up to acquire Fultz may signal the very beginning of the next great era in Sixers' basketball.

It's the type of time that might make a 15-year-old post a seemingly inconsequential YouTube video about "the greatest time in his life," one that's sure to give him a pretty damn exciting lede to an article seven years later.

How does cliff lee coming back to the phillies mean more to you than the Phillies actually winning a championship??