Eagles Flyers Phillies Sixers About Us Write For Us
Malik Monk Makes His Case for 3rd Overall
Report: Celtics considering Josh Jackson, others at first overall

Scout on Phillies' No. 1 prospect J.P. Crawford: He may have been 'overgraded' 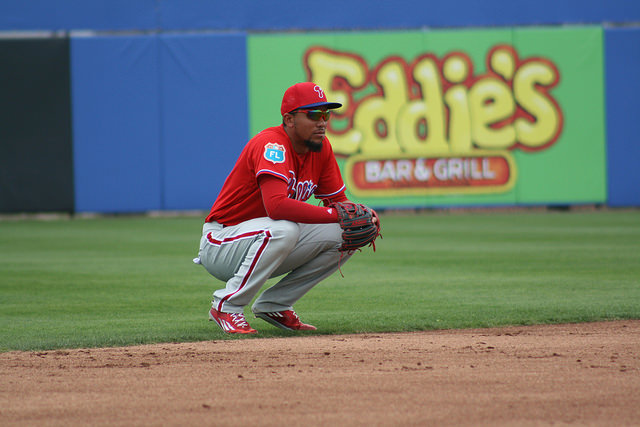 Though the Philadelphia Phillies often get accused of not pushing their prospects to the majors quickly enough, it appears that they may have pushed perhaps their most important one to the brink of the majors too quickly.

After playing 36 games for Double-A Reading in 2016, the Phillies promoted 2013 first-round pick J.P. Crawford to Triple-A Lehigh Valley in mid-May (of 2016). The problem with that was that while Crawford wasn't playing terribly at Double-A, he also wasn't tearing the cover off of the ball. The Lakewood, Calif. native was hitting .265 in 136 at-bats, which isn't normally a number that would lead to a promotion for a prospect.

Once Crawford was promoted to Triple-A, he slashed just .244/.328/.318 in 336 at-bats, which kept him from reaching the major league level last year. His lack of progression, mixed with the fact that other top prospects like Nick Williams also stalled at Triple-A, led the Phillies to promoting Dusty Wathan, who is the winningest manager in Reading history, to Triple-A manager. While the IronPigs entered the day with a 43-22 record, giving them an International League high .662 winning percentage, Crawford has been even more disappointing in 2017, as he's hitting just .194 in 206 at-bats in 2017. In 542 lifetime at-bats at the Triple-A level, Crawford is hitting just .225.

Jon Heyman of FanRag Sports spoke to an anonymous league scout this week about Crawford's struggles, and he suggested that both scouts and the Phillies organization may have gotten too high on Crawford based off of what he did in the lower levels of the minor leagues:

"J.P. Crawford, considered the team’s No. 1 prospect, isn’t hitting at Triple-A. I mean at all. One scout said one possible explanation is that he was “over-graded.”

Crawford became a player who was once considered one of the five best prospects in sports after he tore through the early levels of the minor leagues. In 2013, he hit .308 across two levels, including hitting .345 and demonstrating a good ability to work walks in 142 at-bats in the Gulf Coast League. In 2014, across two levels, he slashed .285/.375/.406 with 11 home runs and 48 RBIs, while walking 65 times. He roared through the Florida State league, hitting .392 in 79 at-bats for the Clearwater Threshers in 2015. He did hit .265 in his first experience in Double-A in 2015 after being promoted, but the expectation was that in 2016, he would look more like the hitter who dominated the lower levels of the minor leagues prior to that. As we know, that hasn't happened.

Prior to the 2017, an anonymous scout, presumably a different one than the one that Heyman spoke to, was critical of Crawford's approach when speaking to Sports Illustrated:

J.P. Crawford needs to stop reading about how good he is and start working to show everyone how good he is. He has to become more disciplined.

Wathan spoke to Jim Salisbury of Comcast SportsNet Philadelphia during Spring Training, and suggested that critics of Crawford's first experience at Triple-A weren't evaluating him correctly:

"J.P. is a tremendous talent, great person. He wants it as much as anybody else wants it for him, as much as the Philly fans want him to be that guy, he wants it just as bad, if not worse than any of those people out there. I think J.P.'s a guy that he's been so highly touted since the day he was drafted, even prior to his draft, that everybody expects 'oh, how come he doesn't have two years in the big leagues yet?'. Everybody develops at their own pace and J.P., he had a learning curve last year, which is good. We want these guys to fail at some point in their career. Hopefully they fail before they get to the big leagues so that they can accept that failure, they know how to get out of slumps, they know how to get around failure. When it happens, it happens. It happens to everybody, in every walk of life. Sometimes there's going to be low points, sometimes there's going to be high points. You hope there's a lot more high ones than there are low. And he went through a low point last year, which is great for us from a development side. I mean, yes, J.P. might not think it is so great, but I think he's learned to embrace that and knows what he needs to do for this year and what he needs to do for his career going forward."

Of course, Crawford doesn't appear to have embraced the low points of 2016 and gained something valuable from them, because he's been even worse at the plate this season. His fielding percentage, which was a combined .966 in 2016, has also dipped down to .953.

It is important to remember that Crawford is just 22 years old. Writing him off now altogether would be a mistake. That said, it may be time, as the first scout quoted suggested, to adjust our expectations for J.P. Crawford. He's not the best prospect in the Phillies' system, Mickey Moniak is. The upsides of other top prospects -- such as Jorge Alfaro, Sixto Sanchez and Franklyn Kilome -- are probably higher than that of Crawford. But that doesn't mean Crawford couldn't still be an important piece for the next great Phillies team.

Trending: Even if he ever parts ways with the Orioles, Buck Showalter unlikely to be a fit with Phillies

It's possible that as the season goes on, he begins to figure things out at the Triple-A level. It seems pretty clear now that he was pushed to the highest level of the minor leagues too quickly. When you consider that he's hitting in one of the deepest lineups in the minor leagues, it's not hard to imagine him going on a tear at some point in 2017. It's also not impossible to imagine Crawford taking time, much like Freddy Galvis did, to meet his elite potential defensively.

Crawford does appear to have been overrated to a degree, but it's far too early to think that the 22-year-old doesn't remain a part of the team's future. It may just be time to grade his development on a slight curve.