Eagles Flyers Phillies Sixers About Us Write For Us
Phillies Promote 2B Scott Kingery to Triple-A
80-08 Phillies Podcast: What should you make of Maikel Franco trade talk?

Who will be the Phillies manager in 2018? 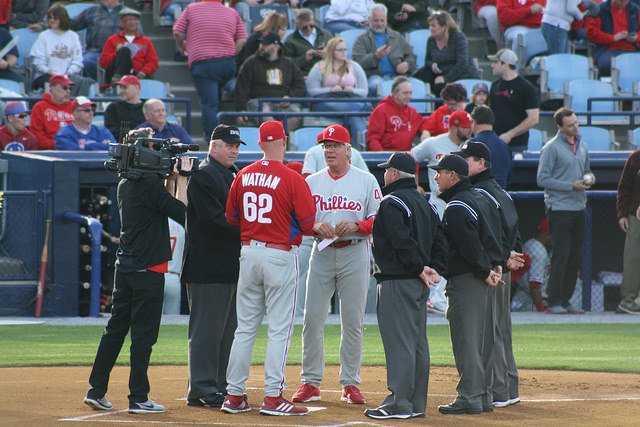 The Philadelphia Phillies remain on-pace to lose well over 100 games. Joaquin Benoit wasn't happy with how manager Pete Mackanin was managing the bullpen earlier this year. Pat Neshek publicly contradicted Mackanin's suggestion that he asked him to come out to pitch the ninth inning last Thursday. Odubel Herrera ran through Juan Samuel's stop sign at third base the evening before. Maikel Franco got picked off of second base Sunday.

As the 2017 season goes on, the Phillies continue to look like an unmitigated disaster - and that's not hyperbolic. The feeling that the last week has left me with is that something will have to give after the 2017 season, and it's not going to be president Andy MacPhail or general manager Matt Klentak.

Despite receiving a one-year extension for the 2018 season (with a club-option for 2019) last month, Mackanin very much appears to be auditioning to keep his job past the 2017 season. As Ken Rosenthal of FOX Sports and John Perrotto of FanRag Sports both noted last week, the Phillies aren't a playoff caliber team, but they aren't a team that should be on pace to land the No. 1 pick in next summer's MLB Draft either.

There's plenty of blame to go around for the position that the Phillies are currently in -- both to those currently in the organization and previously in charge -- but Mackanin may receive the brunt of the blame this offseason. When you consider that Mackanin's new contract only guaranteed him being the manager in 2018, it would be fairly easy to move on from him if management decided that was best for the team's future.

A scenario does exist where Mackanin stays, but is asked (essentially told) to make changes to his coaching staff. In that scenario, or really any scenario, pitching coach Bob McClure would seem to be a dead man walking. But the organization, most notably partner John Middleton, may not feel that change alone would be enough if the Phillies post the league's worst record for the second time in three years.

If Mackanin isn't the manager next season, it's unclear who will be. Dusty Wathan, coach of the Triple-A Lehigh Valley IronPigs, would be the only internal fit. Wathan is the winningest manager in Double-A Reading's history and has coached a majority of the young talent in the upper levels of the Phillies' organization. At 43, Wathan is eventually going to be a major league manager, though it's fair to wonder if Middleton wouldn't want the team to make a sexier hire if they parts ways with Mackanin.

Los Angeles Angels manager Mike Scioscia is a name that will be brought up, but as I noted this past offseason, the fit in Philadelphia probably wouldn't be a very good one:

Los Angeles Angels manager Mike Scioscia has been another name some have speculated about, both because of his connections to Mike Trout and Klentak. This fit isn't as good as some might think. First of all, this isn't the NBA, so you wouldn't hire a coach just in an attempt to lure a player to your team. Secondly, when Klentak was the assistant general manager in Los Angeles, his superior, then-Angels general manager Jerry Dipoto, resigned and has since admitted to having a less than ideal relationship with Scioscia. Much of that reportedly had to do with Scioscia's reluctance to incorporate the advanced statistics that Dipoto was giving him. Klentak was hired at least in part because of his analytical background, so it's hard to imagine he walked out of Los Angeles thinking that Scioscia is someone he would be eager to hire if he ever got the chance.

There were a few other names that I considered at that time that I believe could be fits, starting with former Twins manager Ron Gardenhire. The 59-year-old has been battling prostate cancer, but he had a very successful 13-year stint as Minnesota Twins manager. He is connected to MacPhail, as he served as the team's third base coach during the end of MacPhail's run as Twins' general manager. It's unclear if Gardenhire would want to manage again, but the Arizona Diamondbacks' bench coach figures to draw interest from teams this offseason because of his past success and how well Arizona is playing now. As far as name recognition, Gardenhire may make the most sense if the Phillies made a change. For him to be hired in Philadelphia, he would have to become more fond of incorporating analytics than he was in Minnesota, however. The idea that a few years away from managing may have allowed him to reassess how he values advanced statistics doesn't seem too far-fetched.

Orioles bench coach John Russell also is an interesting name. While I did say that I don't think Buck Showalter and Andy MacPhail would be eager to reunite, Russell played for the Phillies, has managerial experience and connections to both MacPhail and Klentak. Russell was actually a candidate to be name the team's manager after Terry Francona was fired in 2000 and had a stint as the organization's Triple-A manager as well.

Related: Even if he ever parts ways with the Orioles, Buck Showalter unlikely to be a fit with Phillies

Speaking of Francona, his Cleveland Indians have been hot lately and appear as well positioned as any team, save for the Houston Astros, to make a run in the American League playoffs. In that case, his long-time bench coach and former Astros manager Brad Mills could garner some interest. Mills, who was the Phillies bench coach from 1997-2000, posted just a .384 winning percentage in three seasons as the Astros manager. In his defense, he didn't have much to work with and his reputation around the league remains stellar. Sports talk radio may explode if the Phillies hired the 60-year-old, but he would be a name to watch.

With all that said, Mackanin remains under contract for 2018, so the organization would presumably prefer to retain him as manager for at least another season.

What we do know is that the list of managers who have survived losing over 100 games in a season where some thought they could push to win 75-78 games is very small, if not non-existent. If the Phillies don't drastically turn things around in the remaining 88 games, it feels unlikely that Mackanin, regardless of his contractual situation, will be managing the team in 2018.

Yes, Mackanin should have NEVER been granted an extension to begin with. He has not done anything to warrant that. This team has the talent to be no worse than .500, but Mackanin and his moves have proven he is not capable of managing a winner team and as long as he remains the Phillies manager, they will NEVER WIN anything or probably cross the .500 plateau. His attitude going into the season was .500 would be a good year, that's a LOSER'S mentality.