Sixers' defensive deficiencies are music to the Jazz's ears, fall 100-94 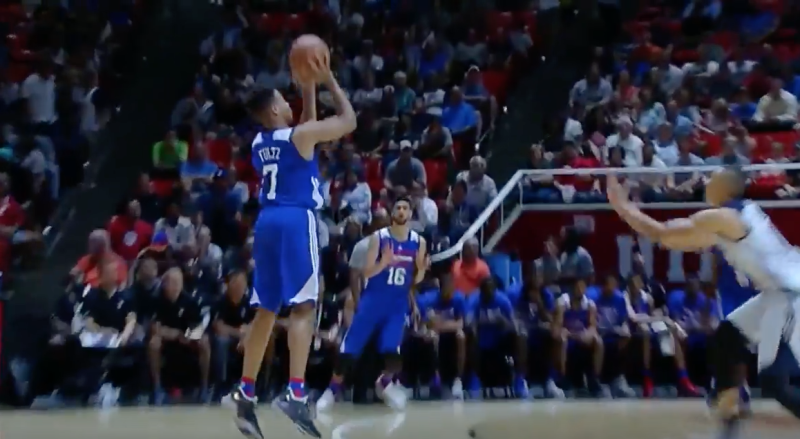 While Summer League is a pro tournament, wins and losses are not the most important things to take away from it. The purpose of these games is to develop players, either draft picks or undrafted free agents, and see which ones are keepers for the team they are playing for.

This is especially good for the Sixers since they fell to 0-2 in the Utah Summer League after a 100-94 loss to the Summer Jazz at the Jon M. Huntsman Center on Wednesday night. While it turned out to be just a six-point game, it was a pretty lopsided affair. The Sixers were down as much as 22 points in the middle of the third quarter.

The Sixers began to disintegrate defensively in the second quarter. The Jazz were driving into the paint with authority. They were getting out-muscled by the Summer Jazz, especially by rookie guard Donovan Mitchell and rookie forward Eric Griffin, who were slamming down dunks and drawing and-ones on layups.

Kaleb Tarczewski, who started at center for the Sixers, was horrible on both ends of the floor. The 7-footer from Arizona wasn't presenting any kind of challenge on defense, leading to his team-worst -14 in only 13 minutes of playing time.

The Jazz began to pull away at the end of the quarter with a 13-4 run that included a ferocious Donovan Mitchell slam with 1:41 left in the quarter, as he blew by Timothe Luwawu-Cabarrot while receiving a beautiful feed from Griffin. The Jazz went into the half with a 13 point lead, 50-37 was the score.

The third quarter started out as bad as it could of for the Sixers. The Jazz came out looking dominant. Mitchell hit a three-pointer to open the half, and on the next possession for the Sixers, Mitchell broke up an errant Furkan Korkmaz pass that was intended to Luwawu-Cabarrot and fired it up to Exum for a vicious slam to make the score 55-37.

Exum had a monster game, as he tallied a double-double of 26 points and 10 assists on 9/16 shooting in 29 minutes of action as he was the best player on the court all night.

Mitchell also had a fantastic game, he scored seven of his 15 points in the first two minutes of the third quarter. He notched four assists, three steals and two rebounds to go along with those 15 points.

Just a few minutes later, Exum and Mitchell hit back to back three-pointers for the Jazz, who were 7-12 from behind the arc at that point in time as the Jazz pulled out to a 20 point lead.

The fourth quarter was the Markelle Fultz Show.

The first overall pick is truly something special to watch. He has some sick handles that allow him to dribble out of trouble in the blink of an eye. He also has such a smooth shooting stroke that allows him to shoot from anywhere on the floor. It wasn't just his shooting that was impressive in the frame. It was the toughness that stood out, as well. With 4:01 left, Fultz was fighting amongst a group of five players for an offensive rebound - all of which who were bigger than him - and was able to come up with it and fire a pass under pressure to a wide open Luwawu-Cabarrot for three, bringing the score to 90-81.

One possession later, it was Luwawu-Cabarrot scorching another three-pointer, his third of the game. They had wiped Utah's monster 22 point lead to only six points.

With the score at 92-86 with 1:40 left, the Sixers had one of their worst offensive possessions of the game, as all five players were stagnant around the three point line with very poor ball movement. Jonah Bolden, who had a very lackluster performance shooting 2/9 with only five points, took the shot from three which missed badly but went off a Jazz player and out of bounds.

On the inbound, Fultz wound up with the ball. He made a bit of a wiggle move on his defender to get open from behind the arc and fired a three that brought the Sixers within three.

Brandon Austin hit two free throws a possession later to bring the score within one point, 92-91.

On the next possession, Mitchell drove to the key and made a nice shot jump shot to extend the Jazz's lead to three. On the ensuing possession, the Sixers rushed a three-point attempt which was way off target. Utah's Tyrone Wallace came up with the board and was fouled by Luwawu-Cabarrot. Wallace split his two free throws before Poythress hit a three-pointer to bring the game within one point. 95-94 with 11.4 seconds to go.

Luwawu-Cabarrot intentionally fouled Mitchell, who hit his first free throw and missed his second. The rebound came straight to Griffin, who was unintentionally thrown to the ground by Luwawu-Cabarrot. He would make his two shots and the game would end 100-94 soon after.

The Sixers had to be happy with Fultz's game, especially in the fourth quarter. He tallied 13 of his 23 points in the final frame to go along with his five boards and assists apiece. He did turn the ball over six times but he will reduce that number soon enough. Fultz tends to overdo it on offense sometimes in terms of showing off his handle. This leads to him taking that extra step sometimes. This happened twice in the first quarter as he was called for traveling. As he gets more comfortable with the game speed at this level, we will only get better and better and correct those mistakes.