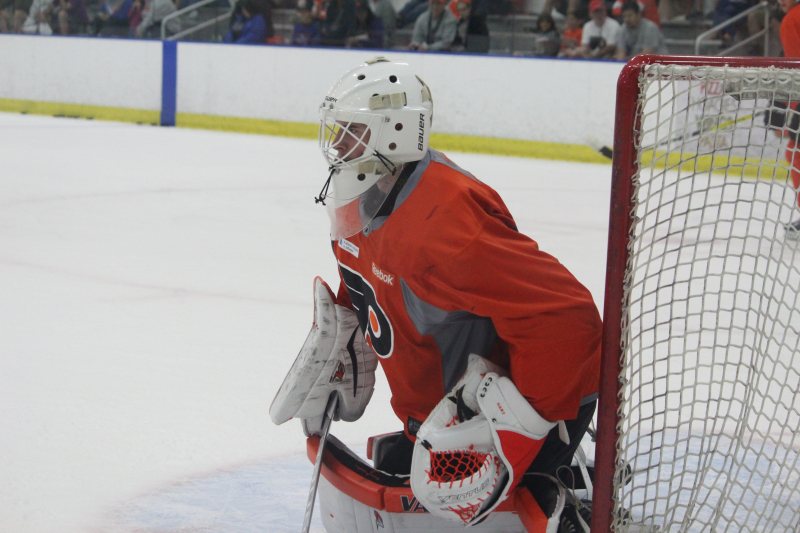 Drafted in the third round of the heavily stacked 2015 NHL Draft, Felix Sandstrom is another young goaltender to keep your eye on, as he has spent three years in the SweHL. Sandstrom was 14-7 this past season recording a 0.908 save percentage and a 2.25 GAA.

And that brings us to Carter Hart.

It’s easy to consider Hart as the goalie of the future for the Flyers, especially with both Michal Neuvirth and Brian Elliott’s contracts ending in two seasons. Hart led the WHL in GAA (1.99), save percentage (0.927) and shutouts (9) last season. That made him the clear-cut choice for CHL Goaltender of the Year for the second consecutive season.

Not only did Hart help the team win the U.S. Division, but the Everett Silvertips also clinched the best record in the Western Conference. Hart was also named the team’s MVP for the second straight season.

When Neuvirth and or Elliott’s contracts expire, it will be the perfect opportunity for Hart to get the call to the NHL. If one of the two goaltenders for the Flyers are still around, it would be great help for Hart as he would have the veteran presence in net to look after him and help coach him along the way.

Hart is still a very young goaltender, but his path to the NHL is becoming clearer season by season. There is good reason to believe that Hart will be AHL bound once he turns 20, and have potentially one or two seasons to grow as a professional goaltender.

Goaltenders are the toughest position due to the fact that they take the longest out of any other position to develop into a legitimate player. It may even take him longer, and of course depends on how he looks during upcoming training camps and preseason games as the team gives him a longer look.

However, it wouldn't be a surprise if Hart was up to Philadelphia sooner than everybody expects him to be.

So who's the next great Flyer's goalie? From what I've witnessed after watching the World Jr Tournament and then the Flyer Development camp, it is easily the outstanding kid from Sweden, Felix Sandstrom. He was voted the outstanding goalie in the World Jr Tournament and he looked almost NHL ready in the FDC. His positioning and skill level have vastly improved since I saw him last year. He looks great. If he continues to improve, he will be NHL ready in 2018