How does Chase Utley's Hall of Fame case stack up against Robinson Cano's? 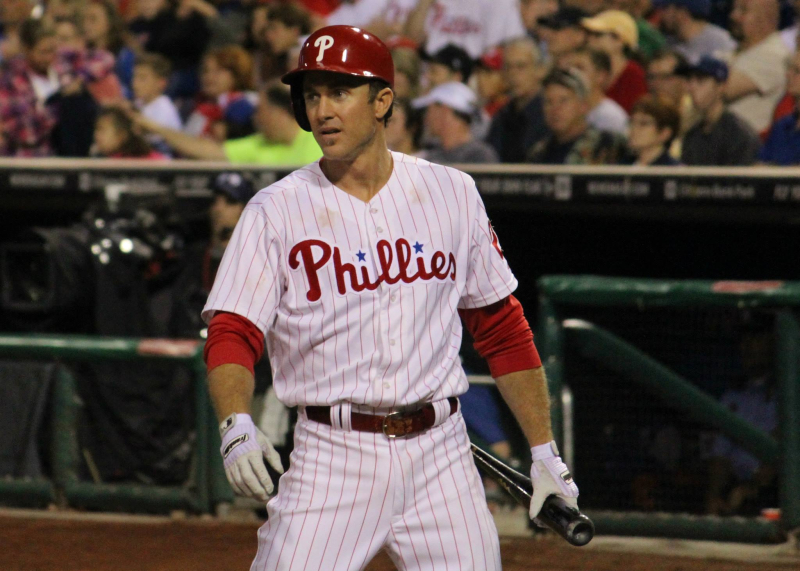 How does Chase Utley's Hall of Fame case look next to one of his contemporaries? (Kevin Durso/SportsTalkPhilly)

Fresh off his heroics in the All-Star Game, the debate about whether Robinson Cano is a Hall of Fame second baseman has heated up. Cano has played much of his career during the same time as former Philadelphia Phillies’ second-baseman, Chase Utley. The two were perennial All-Stars for the respective leagues during the 2000s. Both second basemen have excellent resumes, but there is a chance one falls short of Cooperstown.

It isn’t news to anyone from Philadelphia that during his peak seasons Utley was one of the best players in baseball and best second baseman ever. The issue for Utley was that he couldn’t stay healthy due to knee issues in the late-2000s. During his peak, which is defined as a player’s top-seven seasons, Utley posted 49.1-WAR. The average Hall of Fame second-baseman racked up 44.5-WAR during their seven-year peak. That isn’t shocking to most — but the issue for Utley is his longevity.

While Utley was an all-time great during his peak, he has accumulated 64.8-WAR during his 15 Major League seasons, which falls just short of the average 69.4-WAR accumulated by the average Hall of Fame second baseman. Given his current performance in Los Angeles, it is relatively safe to say that he will fall short of that total.

Related: Billy Wagner says he would vote for Chase Utley and Jimmy Rollins for Hall of Fame

Where Utley does benefit is that there will be a more sabermetric savvy and accepting group of voters by the time he is eligible to enter Cooperstown.

If you pay attention during the Hall of Fame selection process, the terms JAWS may be something you’re accustomed to. If not, JAWS, which stands for Jaffe Wins Above Replacement Score, is a metric used and created by Jay Jaffe of Sports Illustrated. Per JAWS, Chase Utley has a score of 56.9 — which is the exact number of the average Hall of Fame second baseman. As previously stated, by the time Utley is eligible a more statistically savvy group will be voting and that should help Utley.

If we flip over to the second baseman for the Seattle Mariners, we find Robinson Cano, who has accumulated 64.3-WAR during his 13 Major League seasons. As stated with Utley, the average Hall of Fame second baseman accumulated 69.4-WAR during their career, which is a number that Cano should exceed. The odd thing about Cano that I found was that the two major sites, FanGraphs and Baseball-Reference, are way different when valuing Cano. The numbers for Utley and Cano in this article are Baseball-Reference, but Cano has 50.8-WAR, according to FanGraphs, which is a massive drop. That could be an interesting topic of discussion come his election time.

Moving to his peak, Cano was excellent, posting 50.3-WAR during his peak years. Like Utley, that total significantly exceeds the peak for an average Hall of Fame second baseman. That total could potentially move as Cano posted one of his peak-seven seasons last year when he blasted 39 home runs at age 33.

Popular: Hall of Fame or not, Phillies should retire the numbers of Utley and Rollins

The third and final of the three numbers used so far is JAWS, where again, Cano ranks above the average Hall of Fame second-baseman with a 57.3 JAWS score. If you’ve followed the tremendous career of Cano, it shouldn’t be a surprise that he exceeds the average inductee in each of the three scores.

However, there is always more that goes into voting a player into the Hall of Fame. Voters will questions basic numbers like batting average, home runs and even question a player’s character. Neither Utley nor Cano has ever had an off-the-field issue during their career so that won’t be an issue here.

Utley, however, could be damaged by some of the old-school numbers that are used by some voters. When it comes to Wins Above Replacement for second-baseman, Utley and Cano rank 13th and 14th, respectively. Each could reach the top-10 in WAR by accumulating 2-WAR during the remainder of their careers. If this is Utley’s final season, then this is an outside shot for the former Phillie, but almost a guarantee for Cano.

Here is a small chart to rank each player all-time among Hall of Fame second-baseman in a few categories.

As the numbers show, both have been historically great at their position. The better of the two cases does belong to Cano, who has more time left in his career and has been better in majority of categories. By the end of this year, Cano will likely have more home runs than any second baseman that has been inducted into the Hall of Fame. He will also pass Utley in WAR, if we use Baseball-Reference.

Another factor is the hardware that each individual collects during their career. During his 15-year career, Utley has collected four Silver Slugger Awards, while appearing in six All-Star games. Utley also posted three top-10 finishes for National League Most Valuable Player. Though a broken hand may have robbed him of a chance to the win 2007 National League MVP, Utley never finished in the top-five in MVP voting.

Again, Cano does generally have a better collection than Utley, having won five Silver Slugger Awards. Along with that, Cano has two Gold Glove Awards and eight All-Star Game appearances. While Cano has not won a Most Valuable Player award, he has finished top five on four separate occasions and in the top 10 six times.

While both Utley and Cano have very good cases to be made, if my money was on one to get in, I would go Cano. However, I do hope that both get in as Utley was one of the best to ever play the position during his peak. The hope for Utley is that he is valued more by the new wave of voters than he prorbably would be by current voters. Cano is signed through 2023, which would be his age 40 season. That gives him plenty of time to continue to build his Hall of Fame case. Along with that, he has the remainder of this season and then through 2023 to possibly get to 3,000 hits. I believe he is a virtual lock as is—but that would start to push him toward an early-ballot election while Utley, if elected, would likely have to wait a while.