Phillies don't need to rush Crawford with Galvis at shortstop 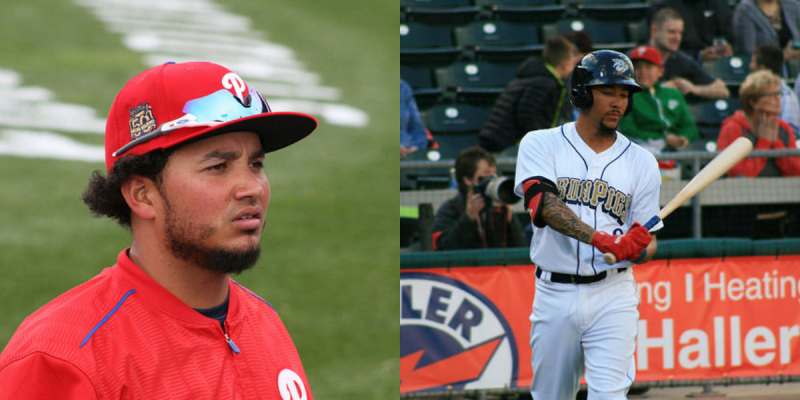 Freddy Galvis is playing serviceably for the Phillies while J.P. Crawford develops at Triple-A. (Frank Klose/SportsTalkPhilly)

This past Sunday, the MLB hosted their annual Future's Game, with Scott Kingery and Rhys Hoskins representing the Philadelphia Phillies. No. 1 overall prospect J.P. Crawford is someone that has previously represented the club at the event, but scouts seem to have cooled on the 22-year-old. While Crawford is working out some of the holes in his game at Triple-A, the Phillies are in a position where they don't need to rush him because of the presence of Freddy Galvis.

The though since the day Crawford was drafted was that he was going to be the team's next long-term starting shortstop. However, after a quick rise through the minor leagues, Crawford has stalled at Triple-A for a year now, concerning talent evaluators. That concern may have been further heightened by Baseball America’s mid-season prospect rankings—which saw Crawford drop from the 19th best prospect to 92nd in just a half-season. While there will always be variation between expert rankings on players, that drop is alarming, especially in a half-season.

Since Crawford has dropped in some eyes and still growing while in Triple-A, it is fair to ask how long is Galvis the solution at shortstop. To this point in 2017, Galvis has posted a .251/.301/.423 triple-slash while being an above-average defender. Due to his defensive abilities, Galvis has 1.3-WAR at the All-Star Break and could match his career high of 2.4-WAR, which he set last season. Galvis is currently in the middle of his age-27 season, so he may be approaching his peak season as a professional—but it sort of aligns perfectly for the transition to Crawford.

Crawford is still only 22 years old, so the idea of giving up on him now doesn't make much sense. Crawford may be slightly behind where some thought he would be, but he’s still on track to be in Philadelphia during his age-23 season. The Phillies find themselves in a decent spot at shortstop because Galvis has been a premium defender, despite being a replacement-level player on offense. But even then, it’s important to note that the position is top-loaded and then experiences a drop-off in production. Right now, Freddy Galvis has an 86 wRC+, which is good enough for 13th among qualified shortstops. It isn’t as if Galvis is the worst in the league on offense—he is simply an average offensive shortstop and that works for now.

In their current situation, the Phillies have a shortstop that is playing at a serviceable level while under team control through next season. That is ideal for the Phillies, as Crawford, who has been playing better of late, may not be ready this season or to start the 2018 campaign. The Phillies are still in the middle of the rebuild and have prospects in the minors ready to make an impact this season or early next season. Crawford may not fall into either of those categories, and the team isn't in a position where they have to push him with Galvis at short.

While I don’t believe that Galvis is a long-term solution, he is a perfect stop-gap for this Phillies team. As of late, he has been more vocal—which is something that manager Pete Mackanin seems to be a fan of. But along with that, he has been better than replacement-level, while the shortstop of the future continues to develop.

I truly believe part of the issue with Crawford was elevated expectations. Yes, he was a top-5 prospect in baseball and that comes with the territory. But he was also immediately looked at as the next Jimmy Rollins, and that isn’t exactly fair. Crawford is still walking at an elite rate in Triple-A and should be an above-average defender in the majors. Crawford is still 22 years old and will definitely be up in 2018. In the meantime, the Phillies feel comfortable with Galvis playing shortstop.