Is there a growing disconnect between the Phillies front-office and coaching staff? 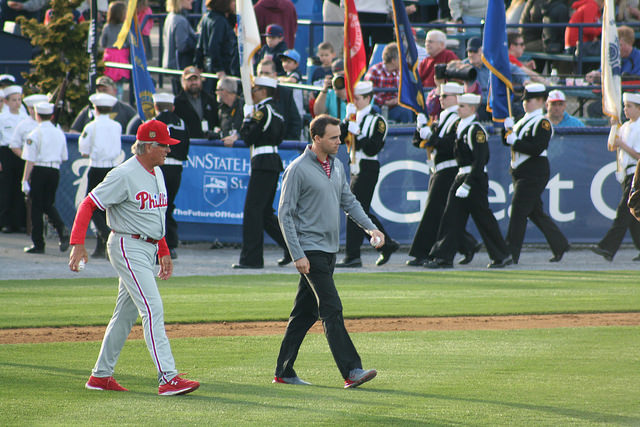 Last week, I wrote about how the Philadelphia Phillies' 15-42 stretch between May and June will force the front-office to make changes to the coaching staff this offseason, if not altogether move on from manager Pete Mackanin. Later in the week, what seemed likely to be an inconsequential interview may have been the clearest indication yet that general manager Matt Klentak's front-office isn't on the same page with Mackanin's coaching staff.

Phillies bench coach Larry Bowa's appearance on The Mike Missanelli Show on 97.5 The Fanatic last Thursday was probably the biggest indicator of there being some sort of disconnect. Missanelli actually remarked to his producer, Jason Myrtetus, that he wasn't entirely sure what to ask Bowa about the segment before the interview. What he got after a commercial break was a seemingly discontent Bowa, who gave one of the more telling interviews of the year.

Bowa, when asked about how he's dealing with what has been a difficult 2017 season, opened by saying that there have been players on the team who have "gone backwards this season." He then transitioned into a point about how the sport as a whole overvalues sabermetrics.

This was a curious statement because he said it right after noting that some players on the team haven't progressed at a pace that pleases the team. It was even more curious because he's employed by an organization that has become one of the more analytically driven teams in recent years. John Middleton was bothered by the (probably correct) perception that under the previous regime, the Phillies had fallen behind the curve in terms of embracing next-level tools. So, Klentak was hired to be the team's general manager, the team increased the size of their analytics department and created a new analytics system called "PHIL."

After Bowa made a point about how players in today's game often become entitled before they earn being entitled (my wording, not his), Missanelli opined that he thinks that sending Odubel Herrera and Maikel Franco, specifically, to Triple-A, would work to "wake them up." Bowa didn't exactly disagree:

Missanelli interjected by saying that the Chicago Cubs had optioned Kyle Schwarber to Triple-A. Bowa continued:

"Schwarber, exactly. And again, that's up to the general manager, the president of the team, who we should send out, is it gonna hurt them, is it gonna help them. There's guys that you look at and you say 'maybe a wake-up call needs to be made here.' But that's a decision that higher-ups make. As coaches, we don't make that decision. If they ask us, we might give our opinion, but we don't make those decisions, Mike. Those are decisions that come from upstairs." 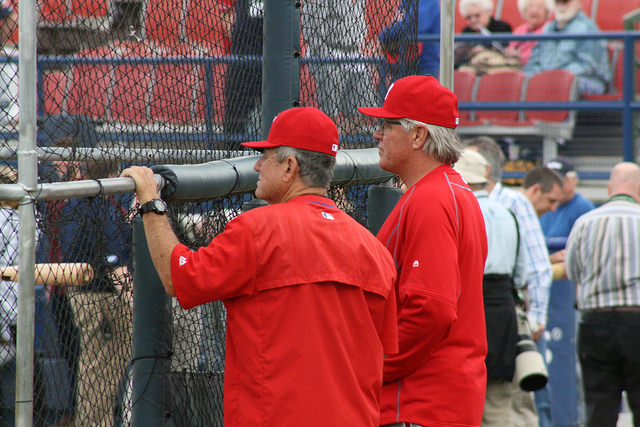 Do bench coach Larry Bowa (left) and Pete Mackanin (right) agree with the approach that the Phillies organization has taken? (Frank Klose/SportsTalkPhilly)

Perhaps this is just how I interpreted his answer, but that sounded like Bowa agreed with Missanelli's assessment that Herrera and Franco could benefit from a stint playing for the Triple-A Lehigh Valley IronPigs. It also sounded like Klentak would not have agreed.

On May 30, manager Pete Mackanin told reporters, including Jim Salisbury of Comcast SportsNet Philadelphia, that he hoped Franco was able to begin to heat up, but that the organization had considered sending him to Triple-A.

On May 31, Klentak appeared with Salisbury prior to the team's afternoon game in Miami, to do a seemingly unscheduled interview. The Phillies were entering the final game of what turned out to be a 6-24 month of May, but one of the biggest topics addressed in the interview was Mackanin's admission the day before. Klentak did say that the Phillies "talk about a lot of things," but made clear when asked that a demotion of Franco was not imminent:

"No, and we are committed to giving Maikel more time to get out of this. We believe in him, we have confidence that he will. There's a lot of indicators, whether you are looking at his exit velocity and his launch angles. Again, I don't want to say that he's been a victim of bad luck by itself, that's not the only thing. But there are reasons to believe that he may get out of this. And that could happen today, it could happen tomorrow, it could happen next week -- we don't know. But we are committed to showing confidence in this kid and finding out what he can do, and that's really the end of it. Right now, he's important to us and we need to show confidence in him and let him go out and play."

Mackanin's quotes made it seem as though he was perplexed with Franco, who hit .218 in May. Klentak's position seemed more nuanced, as he was aware of the frustration with Franco, but wanted to publicly talk him up to build his confidence.

He also cited two sabermetrics -- exit velocity and launch angles -- as reasons he thought Franco could turn around his season. Bowa specifically mentioned "velocity off the bat" as a statistic that he thinks is being overvalued in baseball. Klentak also talked about Franco having been a victim of bad luck. Bowa scoffed at "hitting in bad luck" in his interview with Missanelli.

If you didn't know any better, you would think that Bowa's first response to Missanelli was a response to the interview that Klentak had given nearly a month before:

Klentak on Franco on May 30: No, and we are committed to giving Maikel more time to get out of this. We believe in him, we have confidence that he will. There's a lot of indicators, whether you are looking at his exit velocity and his launch angles. Again, I don't want to say that he's been a victim of bad luck by itself, that's not the only thing. But there are reasons to believe that he may get out of this. And that could happen today, it could happen tomorrow, it could happen next week -- we don't know. But we are committed to showing confidence in this kid and finding out what he can do, and that's really the end of it. Right now, he's important to us and we need to show confidence in him and let him go out and play.

Bowa on Sabermetrics on June 29: We've had guys that have gone backwards this year. The industry -- when I say the industry I'm talking about the entire baseball industry -- I think we are getting caught up in velocity off the bat, spin ratio from the pitcher, hitting in bad luck. To me, these have nothing to do with winning and losing. You need character, you need guys that are fighters - sabermetrics do not measure that. I do not care what organization it is, you need to get guys that are going to stick their nose in the dirt, that are going to battle tooth-and-nail for 27 outs, nine innings, and the game has changed so much that everything is centered around the sabermetrics part of the game. And, I agree there are certain things about sabermetrics that are very helpful for the industry, but when you put together a team and you concentrate 100 percent on spin ratio, exit velocity, hitting in bad luck - I never heard of that, hitting in bad luck. Over the course of 162 games, Mike, everything evens out."

Bowa may have felt vindicated by the fact that Franco ended up hitting just .224 in June, which perhaps came after Klentak used sabermetrics to preach patience with Franco to the coaching staff. Perhaps Bowa's opinions aren't indicative of the rest of the coaching staff, but Mackanin seemed to be more in line with Bowa's position on Franco, and has never seemed especially fond of Herrera.

After Herrera ran through a stop sign at third base, a move that he was eventually fined for, Mackanin told the 94 WIP that Herrera can be 'tough to deal with,' suggesting that he often struggles to get through to the 25-year-old. Last August, Mackanin didn't seem convinced that Herrera was a lock to be the team's long-term starting center fielder. However, after the season, the Phillies reached a five-year/$30.5 million deal with Herrera, and Klentak said that Herrera would remain in center field. A month later, Mackanin echoed those same sentiments at the MLB Winter Meetings, saying that analytics spoke highly of Herrera's work in center field.

Trending: Who will be the Phillies manager be in 2018?

Perhaps that's just a small disagreement in philosophy, but when coupled with Bowa's statements, it makes you think that perhaps the coaching staff feels like the team is overly focused on sabermetrics.

Right now, there isn't a fire between the coaching staff and the front-office. But the situation is worth monitoring, especially if the team doesn't have some sort of second half turnaround. If there ends up being a fire, some of the things cited in this article may end up being the smoke.

It's important to remember, Klentak didn't pick Mackanin to be manager. Even club president Andy MacPhail inherited Mackanin as an interim manager, but he made him the club's permanent manager prior to hiring Klentak as general manager. Klentak has since given Mackanin two brief extensions, but he's yet to commit to the baseball lifer long-term.

The Phillies did give Mackanin a one-year extension through the 2018 season (with a club-option for 2019) in May. In theory, the front-office wouldn't have given that extension if they didn't feel they could work with Mackanin. Mackanin had to wait until he was in his 60's to become a manager, so he perhaps has been more flexible to this point in attempting to incorporate sabermetrics into the team's day-to-day decisions. But with the team on-pace for over 100 losses, six months after Mackanin suggested that the team was 'very close' to contending again, it will be interesting to monitor if the relationship between Klentak and Mackanin's coaching staff is one that can continue past the 2017 season.