Eagles Flyers Phillies Sixers About Us Write For Us
Why LeBron James could join the Sixers in 2018
How does Chase Utley's Hall of Fame case stack up against Robinson Cano's? 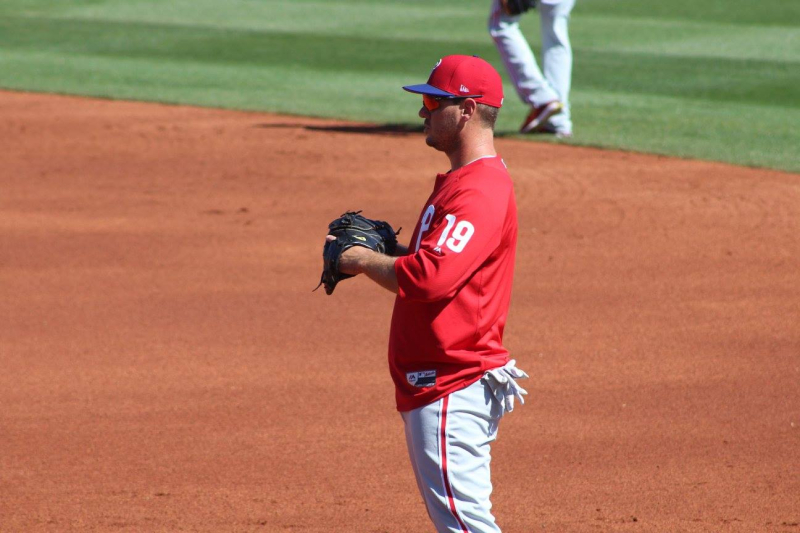 Will Tommy Joseph be with the Phillies after this month? (Brandon Apter/SportsTalkPhilly)

It's the worst-kept secret in the world: the Philadelphia Phillies would like to trade first baseman Tommy Joseph for a respectable return, one that would allow them to promote Rhys Hoskins from Triple-A Lehigh Valley. Whether a trade materializes or not before the July 31 non-waiver trade deadline is another story.

According to MLB.com's Todd Zolecki, the Phillies have 'explored' the market for Joseph. There doesn't, however, seem to be traction with any potential suitors:

The Phils have been exploring a potential trade for first baseman Tommy Joseph, because they would like to get a look at Triple-A Lehigh Valley first baseman Rhys Hoskins -- the club's No. 12 prospect -- and neither seems like a candidate to play the outfield. But it is difficult to see where Joseph would match up with a contending team. He seems likely to stay, which could delay Hoskins' big league debut until September.

Regardless of how some fans (and Larry Bowa) may feel about advanced statistics, the Phillies front-office places great value in them. What these statistics say is that while Joseph is good enough to start for a few teams in the league, he's probably not good enough to be the starting first baseman for a contending team.

Hoskins, on the other hand, is slashing .281/.376/.550 with 20 home runs, 68 RBIs and just 11 fewers walks than he has strikeouts. Hoskins is doing this for Triple-A Lehigh Valley, a year after he swatted 38 home runs for Double-A Reading. He seems to have nothing left to prove at the minor league level.

The thing is, Joseph's trade-value isn't going to skyrocket this offseason, and the Phillies absolutely cannot have Hoskins return to Triple-A in 2018. If general manager Matt Klentak can't work out a trade now involving a team like the New York Yankees, who MLB.com's Mark Feinsand says are 'open' to trading for a first baseman, there's no reason to think things will change much this offseason.

That leaves the Phillies with one of two options: either they have to take a lesser return for Joseph, paving the way for Hoskins to play, or they need to consider using Joseph as the team's backup first baseman. This story ends with Hoskins playing first. If the Phillies can't find an acceptable trade offer for Joseph, their best move in the interim may be to use him off the bench.