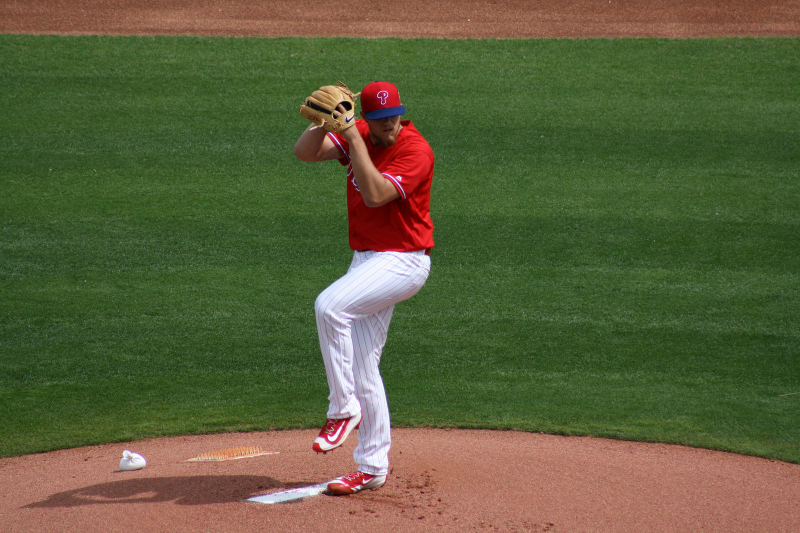 Monday night's one hour, 52 minute rain delay meant that Phillies starter Vince Velasquez had to leave the game after just three innings.  The Phillies had to then turn to reliever Ricardo Pinto to help carry some innings.  After six runs (three earned), Pinto exited the game and now has exited the Major League roster.   The Phillies announced Tuesday that Pinto has been sent to Triple-A Lehigh Valley.

Taking Pinto's place on the roster is pitcher Jake Thompson.  Thompson, once one of the top prospects in the Phillies system, has seen his stock fall in the last year.    In 2016, Thompson was 11-5 with 2.50 earned run average at Triple-A Lehigh Valley before he joined the Phillies.  But back at Triple-A in 2017, Thompson has performed the opposite.  In 18 starts, Thompson is 4-11 with a 5.18 earned run average.

The Phillies went to Thompson as they seem to be committed to Mark Leiter, Jr. working as a starting pitcher, the very reason that Pinto, not Leiter stayed with the Phillies.  Thompson was scheduled to start for the Lehigh Valley IronPigs today but the Phillies apparently decided the need for a fresh arm in the Phillies bullpen tonight is more important.  Should rookie Nick Pivetta falter, there is no one in the bullpen who could pick up a few innings in a pinch.  The IronPigs cobbled together a bullpen game in Thompson's absence.

Thompson has four starts in which he has allowed six or more earned runs and also pitched many quality starts.

The Phillies decided against returning Edubray Ramos to the Phillies bullpen.  Ramos is 2-0 with a 1.69 earned run average in nine games since being sent to Triple-A.