Ice begins to go down at Wells Fargo Center As much fun as this summer was, it's all beginning to come to a close. Schools are starting back up, the weather is beginning to cool down, and before we know it, leaves will change colors and fall will arrive.

The biggest indicator fall is on its way, though? Crews began work Tuesday on putting down the ice at Wells Fargo Center.

Logos are down! Almost time for some @NHLFlyers hockey 🏒 pic.twitter.com/cVDxiiOVdR

A season after the 50th anniversary logo dominated the center-ice circle, the Flyers are reverting back to using two logos in it — something rarely seen in the NHL these days. There's always something blissful about a brand-new, unoccupied sheet of ice — soon enough, though, it will be put to good use.

Though the Flyers' season starts on Oct 4. — just 36 days away. In less than three weeks, the preseason will begin, and training camp will open just prior to that.

In seasons like 2016-17 where the Flyers miss the playoffs, the offseason always feels much longer than it already is. Applying the ice is just one step closer to the end off the offseason. 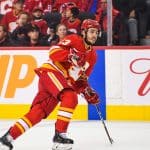