Eagles Flyers Phillies Sixers Union About Us Write For Us
Flyers to Host Rookie Game Against Islanders on Sept. 13
Sixers' Ben Simmons cleared for full basketball activity, Embiid is not yet 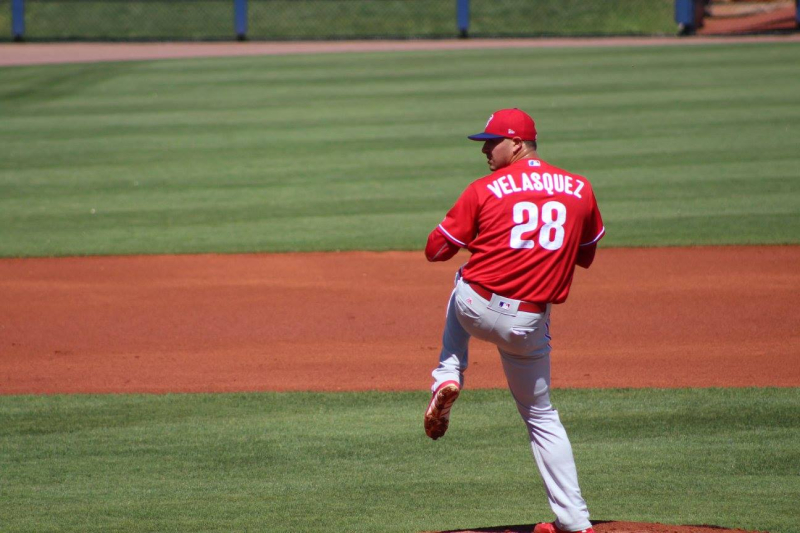 The Phillies don't plan to move Vince Velasquez to the bullpen. (Brandon Apter/SportsTalkPhilly)

By placing Vince Velasquez on the 60-day disabled list Tuesday, the Philadelphia Phillies ended the 25-year-old's 2017 season. The transaction doesn't appear to have ended the experiment of Velasquez as a starting pitcher, however.

Prior to this evening's double-header, general manager Matt Klentak told the collective media, including Matt Gelb of The Philadelphia Inquirer, that the team doesn't plan to move Velasquez to the bullpen after a disappointing 2017 season:

Klentak: Phillies remain committed to Vince Velasquez as a starter in 2018. A 6-8 week recovery to repair vascular issue in finger.

In two seasons with the Phillies, Velasquez has made 36 full starts, occasionally flashing front-end-of-the-rotation potential. More often than not, however, he's displayed an inability to pitch to contact, which has led to high pitch counts and short outings. Of the 36 full starts that Velasquez has made in his two seasons with the Phillies, he's only lasted seven or more innings five times. He's also had three of his 39 total starts shortened by injuries, which have plagued Velasquez since he was in high school.

Though I've often felt like he may be better suited to be a reliever than a starting pitcher, his 2017 season makes me wonder whether he'll be able to succeed in any role. He seems to be overthinking things in the first inning, which probably wouldn't improve if he was pitching in high-leverage situations late in games. His inability to locate pitches or get hitters out without striking them out probably wouldn't improve in the bullpen, especially if he ever experiences any dips in velocity. And, of course, health remains a major concern with Velasquez.

With Aaron Nola and Jerad Eickhoff the only seeming locks to be in the team's rotation in 2018, it may make some sense to see if Velasquez can figure things out early next season. However, he'll probably enter the season with a short leash. Ben Lively and Nick Pivetta will probably open the season in the rotation, and Zach Eflin is going to be in the organization. Thomas Eshelman, who was also acquired with Velasquez in the Ken Giles deal, has had a strong season between Double-A Reading and Triple-A Lehigh Valley and will likely factor into the equation as well. And there's a good chance the team will add a Jeremy Hellickson-type veteran to eat innings.

It's also worth noting that this probably wasn't the time for Klentak to announce any intentions, should the organization have them, to move Velasquez to the bullpen. The organization reserves the right to change their mind about his role this offseason.