Eagles pick up their first win of preseason against the Bills 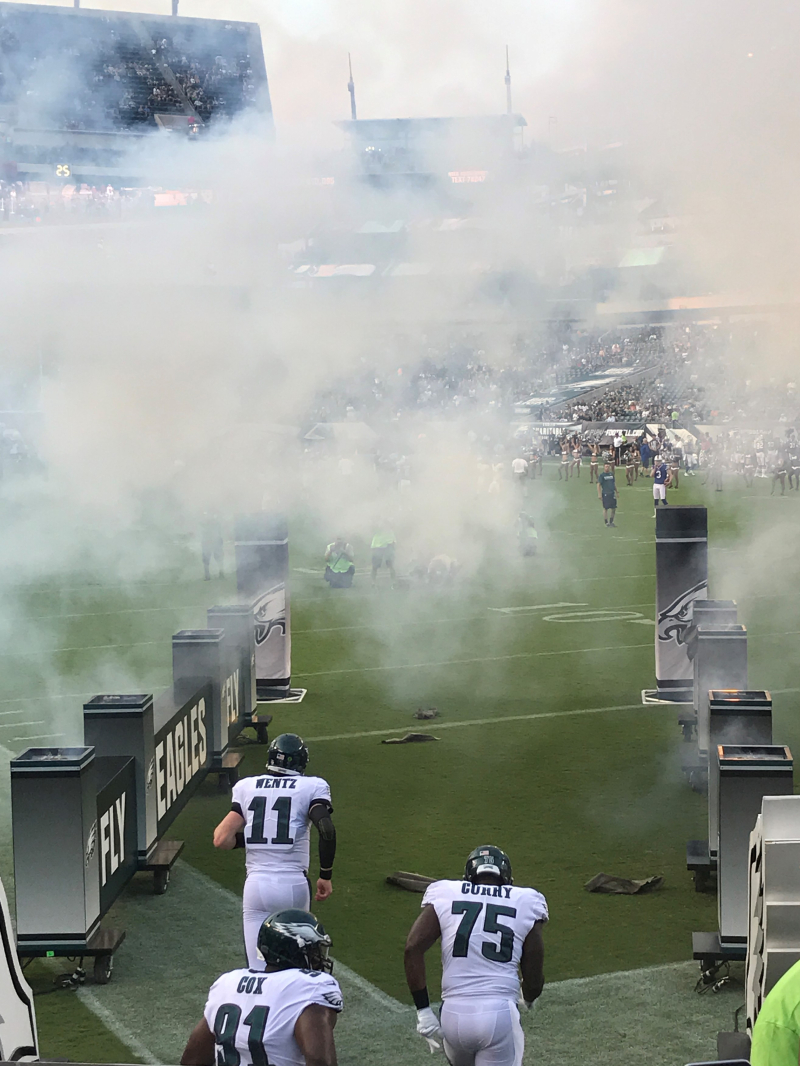 It was not all pretty as the Eagles picked up their first win of the preseason on the Thursday night against the Buffalo Bills at Lincoln financial Field by a score of 20-16.

You could not help but feel the excitement building in the Linc as fans eagerly anticipated the debut of prized free agent wide receiver Alshon Jeffery, and newly acquired cornerback Ronald Darby. Despite another uneven team performance, the two players gave us a glimpse of what we can expect to see during the regular season.

Former Eagle Jordan Matthews did not make the trip to Philly with the Bills as he recovers from a sternum fracture.

Whether it was the absence of Jason Peters, getting used to life without Jordan Matthews, or just having an off night - Carson Wentz looked a bit shaky for the first time all summer.

Wentz went 6 for 9 for 56 yards, with a quarterback rating of 83.6 for the night. The offense went three and out on their first series, and the offense stalled on the second drive, despite having a short field to work with, forcing them to settle for a chip shot field goal by Caleb Sturgis. Fans had to wait until the fourth series to see Wentz connect with Jeffery, much to the crowd's delight.

Wentz struggled with his accuracy a bit in his brief outing, specifically on a couple sideline throws to Jeffery. The preseason is designed to iron out the wrinkles before the bullets are live, so it is not too concerning. The offense will have an opportunity to get it corrected next week, with the regular season dress rehearsal upcoming against the Miami Dolphins.

The Eagles first-team defense gave the boisterous crowd a show on Thursday night, pitching a shutout from more than a quarter.

The defense proved troublesome for Bills quarterback Tyrod Taylor early on, coming away with two interceptions courtesy of Mychal Kendricks and Ronald Darby.

Kendricks and Jordan Hicks each recorded sacks. Kendricks in particular was all over the field.

Veteran safety Corey Graham appears to have acclimated himself quite nicely, and led the team with 5 solo tackles.

Ronald Darby is the real deal folks! Darby gives the defense so much flexibility, and has the talent to erase the oppositions best receiver. He wasted no time endearing himself to Eagles fans, electrifying them with a 48-yard interception return. Darby displayed his quickness and instincts, and finally gives the Eagles the number one cornerback they have spent years searching for.

LeGarrette Blount has struggled so far this preseason, only totaling a combined 9 carries for 17 yards – and fumbling away an impressive catch-and-run, ending a drive in the first quarter. Blount could be one of those vets who turns it on once the regular season starts, but it is mildly concerning. He will be one to watch next week, as the starters will play into the third quarter.

Speaking of running backs – don't look now, but Corey Clement may just be closing in on Wendell Smallwood's roster spot. While Smallwood has been nursing a hamstring injury, Clement made the most of his touches last night, earning 34 yards on 8 carries, and the Eagles first touchdown of the evening. Clement has shown marked improvement in both pass catching and pass receiving. If he keeps at this pace, it will be hard for the team to part ways with the bruising runner from Wisconsin.

Mychal Kendricks has had a great preseason. After playing in just 27% of the defensive snaps last season, he is making his case for playing a much more prominent role on defense this year. Though just a small sample, he showed signs of the Mychal Kendricks of 2013-2014, recording an interception and a sack. Good stuff.

Wide receiver Marcus Johnson made his much awaited debut, and did not disappoint. He had 2 receptions for a team-high 45 yards, including an impressive 38-yard catch and run from quarterback Matt McGloin. Johnson and Mack Hollins entered the game late in the first quarter and played through halftime, which would seem to bode well in his roster bid. After the coaching staff saw what they needed to see from Johnson as a receiver, they got an extensive look at him as a gunner, and up-back on kickoff returns.

Quarterback Matt McGloin continues to struggle mightily. I was a fan of McGloin at Penn State, as I respect his fiery demeanor and underdog mentality, but man has he been brutal to watch this preseason. He struggled the get the second team offense moving, as his throws were mostly erratic, with his best throw coming on the 38-yarder to Johnson.

While on the subject of quarterbacks, Dane Evans is the man! No, seriously, the crowd really got behind Evans, and he showed a lot of poise moving the ball down the field. Evans went 9 for 12 for 56 yards and an interception. The interception was not really his fault, as receiver David Watford failed to secure a catch that was taken away by a Bills defender. Evans drove the team down the field for the game-winning drive, culminating in a Byron Marshall one-yard touchdown.

Veteran Corey Graham was mixed in with the first-team defense at safety when they moved Malcolm Jenkins down to play the slot.

Fans should be really excited about the promise Derek Barnett has shown. Barnett already has 3 sacks this preseason, including 2 last night. He did a great job setting the edge and being physical at the point of attack. It would not surprise me to see Barnett challenge Vinny Curry for a starting spot, though I would like to see him compete against starters next week against Miami.

I feel really good about where Rasul Douglas is at this stage of his young career. He has consistently challenged receivers at the line, and is well adept in reading the eyes of the quarterback, allowing him to come up and make plays on the ball. He was all over the field last night.

Steven Means has to have one of the most violent get-offs that I have seen. I paid close attention to Means, and he really impressed me with his aggressiveness, and was rewarded with 2 sacks for his efforts. While not quite as young as his challenger Alex McCalister, Means stated his case to be the 5th defensive end. He also performed well on special teams.

Rasul Douglas and Mack Hollins were the first-team gunners.

Mike Trout was just rows away from me last night, but I did not get a chance to persuade him to sign with the Phillies… The Eagles will play their next preseason game next Thursday night when they host the Miami Dolphins after participating in joint practices with the Dolphins leading up to gameday.

View All Posts By Andrew DiCecco

View All Posts By Andrew DiCecco