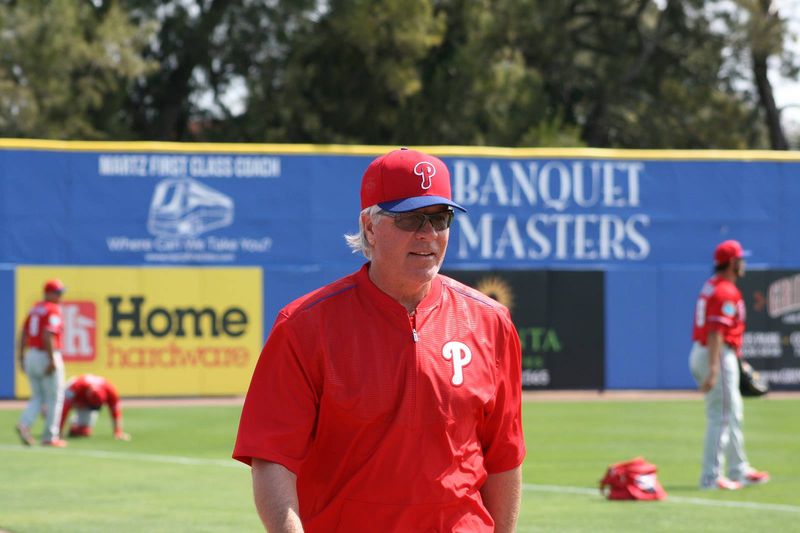 With Rhys Hoskins’ August explosion and an impressive start to the career of Nick Williams, the Philadelphia Phillies 2018 lineup, which will also presumably include Scott Kingery and healthy versions of Odubel Herrera and Aaron Altherr, seems fairly set. Manager Pete Mackanin knows that the same thing can’t be said for the starting rotation.

After Saturday’s 17-2 loss to the Chicago Cubs, the club’s skipper told the collective media, which included Ben Harris of MLB.com, that he believes the team needs to make upgrades in their rotation heading into 2018:

“I think we have to upgrade,” Mackanin said.

Ben Lively, who allowed six earned runs Saturday evening, has a 4.36 ERA in nine starts this season, probably making him a fairly safe bet to be in the rotation in 2018. He, of course, will be joined by Aaron Nola, who has pitched like a No. 1 starter for much of the summer. Jerad Eickhoff, despite a 2017 season that’s been a mixed bag, will be in the rotation as well.

The final two spots in the rotation are where things get interesting.

Nick Pivetta has an electric fastball, but is clearly still very raw in terms of his full repertoire, which explains the 6.57 ERA he has in 19 starts.  Mark Leiter Jr. has a 3.86 ERA in 21 appearances in 2017, five of which have been starts. His upside probably isn’t especially high, but he has great control. Despite a few impressive starts in 2016, Zach Eflin, who is currently on the disabled list with a shoulder injury, has a 5.85 ERA in 22 career big league starts.

Then there’s Vince Velasquez, who is out for the season with a vascular injury in a finger on the hand he grips the ball with. In two seasons with the Phillies, Velasquez has made 36 full starts, occasionally flashing front-end-of-the-rotation potential. More often than not, however, he’s displayed an inability to pitch to contact, which has led to high pitch counts and short outings. He also comes with a long injury history, one that seems to lengthen a few times a season.

General manager Matt Klentak said last week that the Phillies do plan to continue using Velasquez as a starter, rather than transitioning him into a reliever. Though the front-office certainly could change their mind, Klentak has quite a bit invested in Velasquez, so there’s a good chance he’ll fill one of the final two rotation spots.

Later in Saturday’s press conference, Mackanin cited Jeremy Hellickson as the type of pitcher that the Phillies could potentially target this offseason:

“You just have to choose the guy you think has got the most potential and hope that he makes it. In the meantime you try to surround him with the [Jeremy Hellicksons] of the world, or try to even do better than that,” Mackanin said.

Hellickson will be a free-agent this offseason, but the bet here is they will target similar players, but probably go in another direction than re-signing him. Trevor Cahill, Andrew Cashner, Bartolo Colon and Josh Tomlin are some free-agents that could potentially fit this description. Though Mackanin did wonder if the Phillies could potentially “do better” than that type, it feels unlikely they will commit to any free-agent pitchers beyond one-year, which limits the quality of player they could potentially sign.

It is possible that the Phillies inquire about someone who Mackanin would deem as “better” through the trade market. Jeff Passan of Yahoo! Sports reported that prior to the non-waiver trade deadline, the Phillies did “poke around” on controllable starting pitching. Pittsburgh Pirates RHP Gerrit Cole, Tampa Bay Rays RHP Chris Archer and Toronto Blue Jays RHP Marcus Stroman are among the names that the Phillies could potentially check in on, though a trade for any of the three would take quite the haul of prospects and probably isn’t likely.

Popular: Ryan Howard is already running out of time in Rockies organization

Though the team’s potential front-end starting pitching prospects like Sixto Sanchez remain a ways away from the major leagues, Thomas Eshelman, who has had a strong season between Double-A Reading and Triple-A Lehigh Valley, is another name that could potentially factor into the team’s rotation in 2018.

While Mackanin, who received an extension in May, sounds certain he’ll be back in 2018, it’s unclear what the future of his pitching coach Bob McClure is. After a season where most of the team’s young starting pitching was disappointing, perhaps the organization will decide that the pitching coach is a position they need to upgrade as well.