Ryan Howard already running out of time with Albuquerque Isotopes 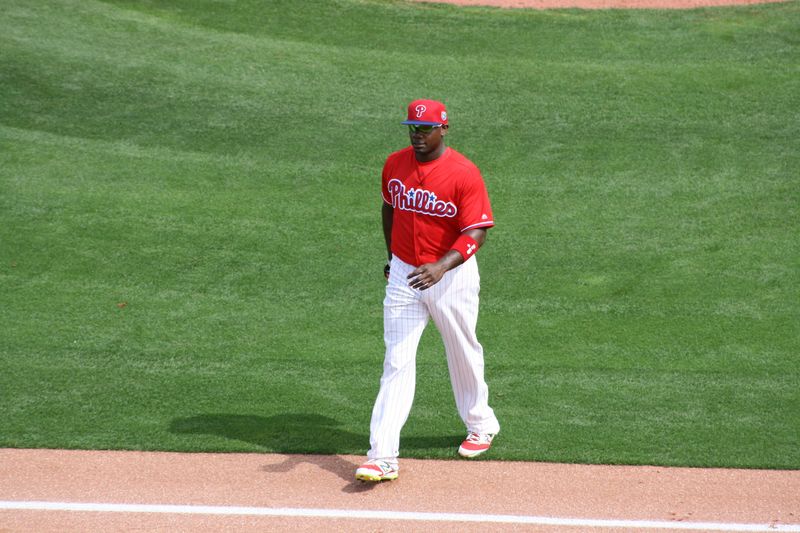 Former league MVP Ryan Howard may be in the final week of his baseball career. (Frank Klose/SportsTalkPhilly)

Earlier this year, I wrote that former Philadelphia Phillies All-Star Domonic Brown was having as much fun in Albuquerque as Walter White did in the final two seasons of Breaking Bad. The Isotopes, who are the Triple-A affiliate of the Colorado Rockies, quietly released Brown last month. Brown's former teammate, Ryan Howard, may be headed for a similar fate.

Howard signed a minor league deal with the Rockies on Aug. 12, in a rather shocking move. Through the first seven games of his stint with the Isotopes, the former National League MVP is slashing .192/.185/.308 with zero home runs, three RBIs, eight strikeouts and zero walks. It's easy enough to say that Howard hasn't had a chance to prove himself yet - he's only had 26 at-bats - but he only had an 11-game, 38 at-bat stint with the Triple-A Gwinnett Braves before they released him in May.

The Braves signed Howard to a minor league contract and gave him a brief chance to prove himself at Triple-A prior to playing seven games in American League parks, where Howard could have served as a designated hitter. The Rockies have just three interleague games left on their schedule, none of which are on the road. So they signed Howard to possibly be a Matt Stairs type presence in September and the postseason.

The problem for Howard, 37, is that to be eligible for the postseason you have to be on a team's 40-man roster by midnight on Aug. 31. We are a week away from that date, and Howard hasn't given the Rockies any indication that he can provide that type of threat off of the bench down the stretch.

If the season ended today, the Rockies would win the second National League Wild Card. As things currently stand, the Rockies seem much better suited to wait for Ian Desmond to return from the disabled list and stick with players currently on their roster. While Desmond has been injured and former All-Star Carlos Gonzalez has declined, Charlie Blackmon is one of the best outfielders in the league, Gerardo Parra is having a career year and Mark Reynolds has had a productive season from a power perspective.

Howard, who is hitting just .217 between his two minor league stints this year, appears to be in the final week of his professional baseball career. Though he seemingly shocked the world in getting a chance with two National League organizations this year, there's a good chance that within the next week the Rockies release Howard, putting an end to his career.

still amazed the phillies gave that much money to a professional ball player who couldn't learn how to take a walk, never did, couldn't hit to half of the field of play.. what happened