Phillies Nuggets: Which members of 2008 team should go on Wall of Fame? 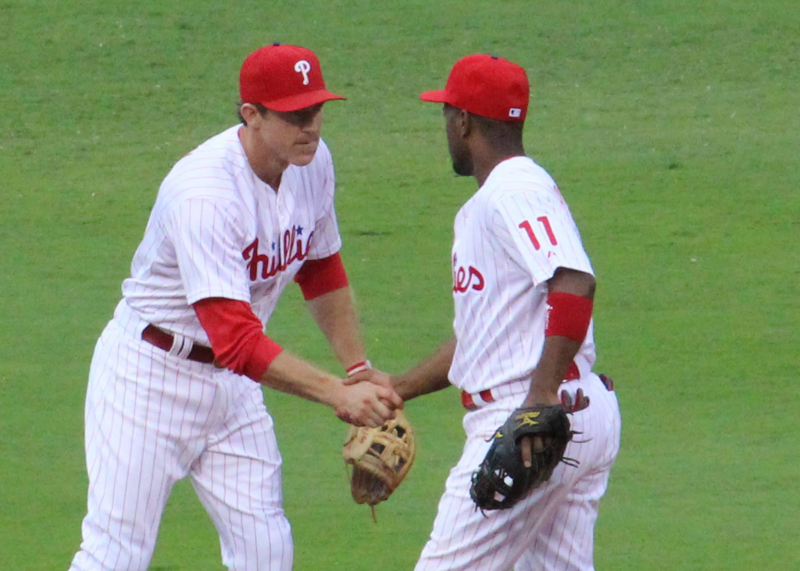 Chase Utley and Jimmy Rollins are locks for the Phillies Wall of Fame. (Kevin Durso/SportsTalkPhilly)

This past weekend, the Philadelphia Phillies, for the first time since 1977, didn't induct a new member into the club's Wall of Fame as part of Alumni Weekend. While next year's ballot figures to include just two members of the 2008 World Series team - Brad Lidge and Jamie Moyer - inductions over the course of the next decade figure to be dominated by players that were part of the second team in franchise history to win a title.

So who should, and perhaps more importantly, who will be inducted into the Wall of Fame from the 2008 team?

Utley had one of the greatest peaks that a second baseman has ever had - his WAR 7 of 49.2 is higher than Hall of Famers Bobby Grich, Roberto Alomar, Ryne Sandberg and Craig Biggio, among others - and is one of the five most beloved players to ever wear red pinstripes. He's as much of a lock as one can be.

He, of course, was also part of the greatest run in team history, helping the Phillies to win five National League East titles, two National League Pennants and a World Series between 2007 and 2011. The organization won't do this for a variety of reasons, but if they were to create a ballot with just players from the 2008 team, my guess is Utley would beat out all of his former teammates.

At 38, I suggested earlier this season that this could be Utley's final season, especially since his hometown Los Angeles Dodgers look like the favorite to win the World Series. Whenever Utley does retire, he would have to spend three seasons away from the game before becoming eligible for the Wall of Fame. You can bet that he'll be inducted in his first year of eligibility.

Related: Hall of Fame or not, Phillies should retire numbers of Utley and Rollins

In 14 seasons with the Phillies, "J-Roll" made three All-Star appearances, won four Gold Glove Awards, a Silver Slugger and the 2007 National League MVP.

His 2007 declaration that the Phillies were 'the team to beat' is one of the most famous quotes in Philadelphia sports history, and propelled the Phillies to their first division title since 1993 and him to an MVP season.

Though perhaps not as individually dominant as Utley, Rollins is the franchise's all-time hits leader and many would consider him the face of the aforementioned greatest era in club history. I've suggested, along with Utley, that the team should retire his number.

While Rollins did have a stint with the San Francisco Giants this spring and mentioned last month that he does still wish he was playing, his career appears to be over. He should be inducted at some point early next decade.

Though a painful back-end of his tenure with the Phillies probably cost him a chance to be viewed in the same light as Utley and Rollins, Howard is the second greatest power-hitter in the history of a team that has existed since 1883. There's a reason he's in the "locks" category.

Like Utley and Rollins, Howard figures to be inducted at some point next decade. It's possible that the Phillies could have Utley, Rollins and Howard, in whatever order, go on the Wall of Fame in consecutive years. Regardless of when Howard's inducted, he will be and reliving the 284 home runs he hit between 2005 and 2011 will be special.

If you had told anyone a decade ago that Ruiz would spend parts of 11 seasons with the Phillies and be considered a lock for the Wall of Fame, they would have laughed at you. But here we are.
In his decade plus with the team, Ruiz became a much better hitter than initially expected, peaking in his All-Star season of 2012 when he slashed .325/.394/.540 with 16 home runs and 68 RBIs. He also developed a reputation as one of the game's best defensive catchers, and probably would have won multiple Gold Glove Awards had it not been for Yadier Molina.
Ruiz is also tied for the major league record of four no-hitters caught, having caught three of those from Cole Hamels and Roy Halladay, both of whom figure to eventually be on the Wall of Fame. As Ryan Lawrence of Philly Voice wrote last summer, Ruiz was the most popular "person" from the 2007-2011 run, which should make his eventual induction into the Wall of Fame a special evening.

It perhaps puts in perspective how great the Phillies were from 2007-2011 that the 2008 World Series MVP and one of the most consistent pitchers of his era is the fifth name mentioned on this list.

Hamels made three All-Star teams during his time with the Phillies, is third in club history in strikeouts and, as SportsTalkPhilly.com's Matthew Shinkle noted, had a 3.30 ERA in parts of 10 seasons with the team.

The Phillies traded a still in-prime Hamels to the Texas Rangers in July of 2015, but only before he threw a no-hitter in his final start with the team. Had he spent a few more seasons with the team, he probably would have went down as one of the 10 best players in the history of the organization. As it stands, he came in at No. 19 on SportsTalkPhilly.com's countdown of the top 25 Phillies last offseason.

At some point, Lidge is likely going to be inducted into the Wall of Fame. Like Thome (and eventually Roy Halladay), a sentimental case will carry him in, rather than the overall body of work.

Lidge went 41-for-41 in regular-season save attempts during the 2008 regular season, before closing out the final games of the NLDS, NLCS and World Series. He finished the second World Series title in franchise history in a perfect fashion, going 48-for-48 in save attempts in 2008.

All things considered, Lidge was fairly effective in 2010 and 2011, even though he essentially was throwing his signature slider exclusively.

The problem? 2009 was one of the worst seasons a closer has had in recent memory, as Lidge blew 11 regular season saves. He also wasn't especially effective during the World Series that year, which played a part in the Phillies' failed attempt to repeat as World Champions. Lidge also is just fifth in team history in saves, with Steve Bedrosian, who was on the 2017 ballot, two slots ahead of him.

With all that said, like when Thome went in, I'm not going to kick-and-scream if Lidge is inducted. Lidge screaming "oh my god!" as Carlos Ruiz rushed out to embrace him after the 2008 World Series is one of the most iconic moments in Philadelphia sports history. Getting to relive that moment for an entire weekend wouldn't be the worst thing in the world.

Phillies Nuggets: Who will be 2018 Wall of Fame inductee?

From 2008 to 2011, Victorino was one of the five best fielding center fielders in the MLB, which helped him to win three Gold Glove Awards and make two All-Star appearances.

Though it didn't turn out to be the most famous postseason Grand Slam that he would ever hit, Victorino's 2008 NLDS blast off of CC Sabathia is one of the most iconic moments in club history.

His on-field production shouldn't overshadow the fact that he was one of the most popular Phillies of the era. He may have to wait a little longer than some of the other names mentioned, but with fan-voting playing a heavy role in deciding who gets inducted into the Wall of Fame, Victorino will probably be inducted.

In a world where Jim Thome is in the Phillies Wall of Fame, and Roy Halladay, Brad Lidge and Shane Victorino probably will eventually be, it seems nearly impossible to make a case for Werth not being worthy.

Sure, we can have a discussion about whether any of those names should be in, but as long as the Phillies continue to ask fans to vote annually for a new inductee, this is where we are at.

In four seasons with the Phillies, Werth posted an 18.1 WAR (per FanGraphs), hit 95 home runs and drove in 300 runs. He also made the 2009 All-Star team, and in and organization that has housed Mike Schmidt, Chase Utley and Ryan Howard, it's Werth who is the franchise's playoff home run king.

In all liklihood, Werth will fall into the same category that Scott Rolen currently is, great production being overshadowed by largely unfair narratives that most fans believe. The Phillies website says that "character" is something that is considered when evaluating Wall of Fame candidacies. Here's the thing: it's not if you are the right person, but many fans will probably cite this as a reason they won't vote for Werth, despite the fact that it's pretty much baseless.

Jamie Moyer is a great story. His already improbable career brought him to his hometown Phillies for four seasons in his mid-40s. During that period, he did win 47 games, start the National League East-clinching game in 2007 and pitch 6.1 innings admirably during Game 3 of the World Series, despite reports that he had a stomach virus.

With all of that said, this isn't even a debate - Moyer is not worthy of induction to the Phillies Wall of Fame.

I do fear that he may have a better chance of induction than Werth, but once voters are honest with themselves, it will become pretty clear that Moyer isn't someone that should be inducted. 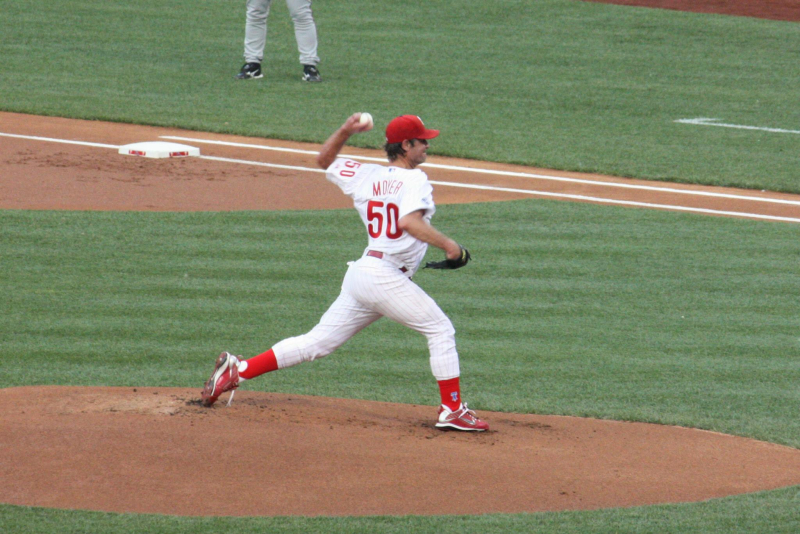 Victorino is the s***