Eagles Flyers Phillies Sixers Union About Us Write For Us
Leiter, Phillies aim to turn the tides against Nicolino, Marlins
Phillies dominate Marlins behind Leiter, Hoskins 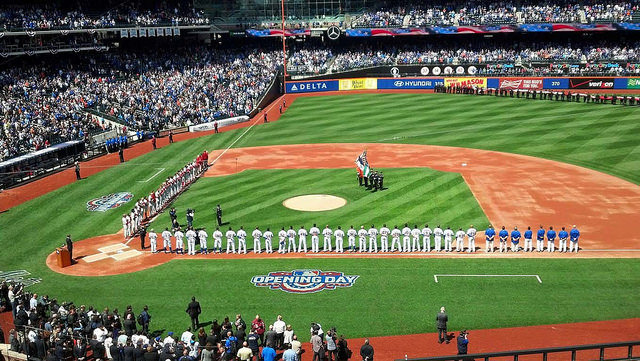 The Phillies and Mets may meet outside of New York or Philadelphia in 2018. (Shelly S./Flickr Creative Commons)

The Philadelphia Phillies, rather curiously, weren't involved in the first edition of the MLB's Little League Classic. It doesn't sound like fans will have to wait too long to see the Phillies play in the event, however.

After the Pittsburgh Pirates played the St. Louis Cardinals in the first year of the event, John Perrotto of FanRag Sports says that the Phillies are likely to play a National League rival in the next installment of the event:

An industry source said plans are tentatively in the works for another Little League Classic matchup between the Philadelphia Phillies and New York Mets. That game could be played at Bowman Field, which opened in 1926 and is the home of the Williamsport Crosscutters, the Phillies’ affiliate in the short-season Class A New York-Penn League.

Though Perrotto didn't specify, this would presumably take place during the 2018 Little League World Series. The Phillies would be the home team, which would mark the first time since Citizens Bank Park opened in 2004 (and probably even further back than that) that the team played a home game somewhere other than Philadelphia.

Mitch Rupert of The Williamsport Sun-Gazette says that the Phillies were already scheduled to play on the West Coast when the league began to plan the inaugural edition of the Little League Classic, which would explain why they weren't featured in the game. MLB commissioner Rob Manfred did say last weekend that the Phillies would be a "logical choice" to play in the next edition of the series.

What direction the Little League Classic heads in will be interesting. The Phillies could play the Pirates every year in the event, but that would seemingly make it just something that the state of Pennsylvania is interested in. Other regional teams with large fanbases -- the New York Yankees, Boston Red Sox, Baltimore Orioles, Washington Nationals -- would probably be the quite the draw as well. It's unclear if the event would be as much of a success if two teams not from the area were involved, because their fans wouldn't be able to drive to the game.

The NHL Stadium Series began with just the Winter Classic, and has expanded. Perhaps each season during the Little League World Series, two local teams could play in a game at Bowman Field. During Hall of Fame Induction Weekend, Doubleday Field could presumably host a similar event. And those certainly aren't the only two stadiums in the country capable of hosting events like this.

What's clear is that the Little League Classic is probably going to become an annual event, and the Phillies are likely to be involved in the next installment of the event.