Eagles Flyers Phillies Sixers About Us Write For Us
Previous month:
August 2017
Next month:
October 2017

Preview: Eagles go coast to coast for matchup with Chargers

The Eagles will play against the Los Angeles Chargers for the first time since 2013 this Sunday at StubHub Center. In the short history between these two teams the Chargers lead the series 7-4. The Chargers have won the last two meetings and the Eagles last victory came way back in 2005.

Of the 106 players on the two rosters, there are 11 players remaining for either team from that 2013 meeting. Those players are Philip Rivers, Keenan Allen, Antonio Gates, Jahleel Addae, Corey Liuget, Nick Foles, Zach Ertz, Brent Celek, Najee Goode, Mychal Kendricks, and Fletcher Cox - who will not dress this weekend.

That is a drawn out way of saying that history means nothing this Sunday. 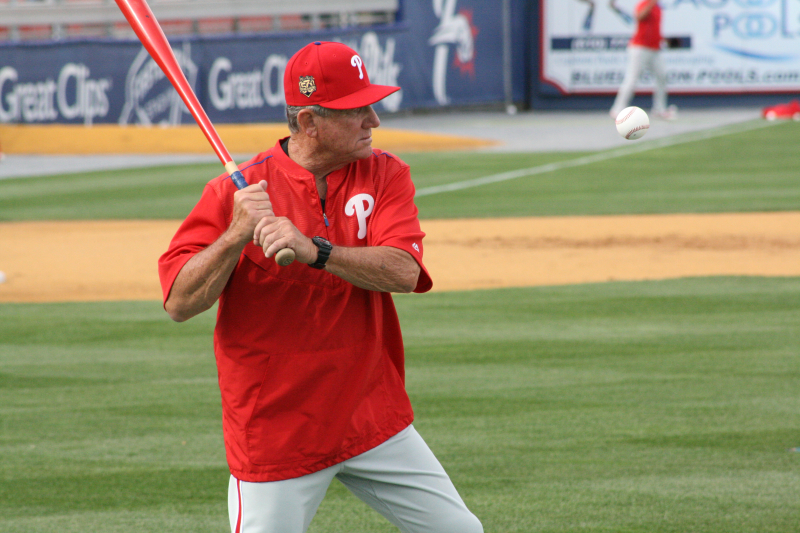 Continue reading "Larry Bowa: My 'No. 1 priority' is to remain with Phillies" »

Managerial Candidates That Aren't Likely for Phillies: Scioscia and Showalter

Friday, the Philadelphia Phillies announced that manager Pete Mackanin won't return as manager in 2018. Earlier, we took a look at 10 potential candidates that could replace him. Two names that people have speculated about are Baltimore Orioles manager Buck Showalter and Los Angeles Angels manager Mike Scioscia. Neither, in my estimation, are especially good fits.

10 Potential Managerial Candidates for the Phillies

With this afternoon's news that Pete Mackanin will not return for his third full season of managing the Phillies in 2018, general manager Matt Klentak, president Andy MacPhail and partner John Middleton will now embark on a managerial search. Here's a list of possible managerial candidates - not necessarily in order of likelihood - from all different backgrounds.

Sixers' Joel Embiid participates in half court 5-on-5 practice, Okafor does as well

If you heard a loud sigh of relief from the cubicle next to you at work today, your co-worker probably saw that "The Process" himself did something this afternoon that he hasn't done in a long, long time.

According to CSN's Jessica Camerato, Joel Embiid participated in "half court 5-on-5 segments" at practice this afternoon.

This is obviously huge news, since Embiid has not been permitted to practice 5-0n-5 at any extent since he had “minor" arthroscopic surgery on his left knee back on March 24th.

The fourth year big man, who's only played 31 games in his NBA career, has been in talks with the Sixers for a contract extension before he becomes a restricted free agent next summer. The fact that Embiid is beginning to ease his way back into the groove of practicing 5-on-5 could potentially help move the negotiation process between the team and the former Kansas big at a much faster rate.

In other news, Jahill Okafor was a full participant in practice today. Okafor has been practicing at 5-on-5 for a few straight days now which bodes well for both him and his stock going forward.

Due to the glut of big men on the roster and his awkward fit in Brett Brown's system, the team may look to deal Okafor before the season begins. 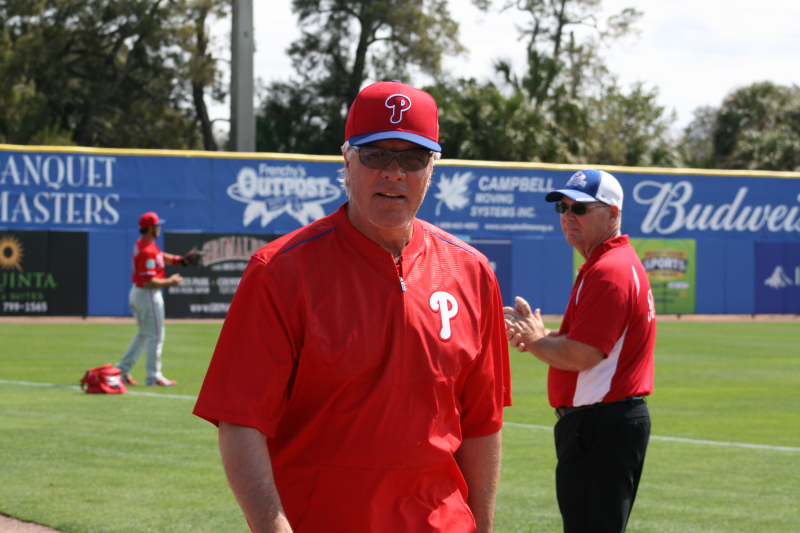 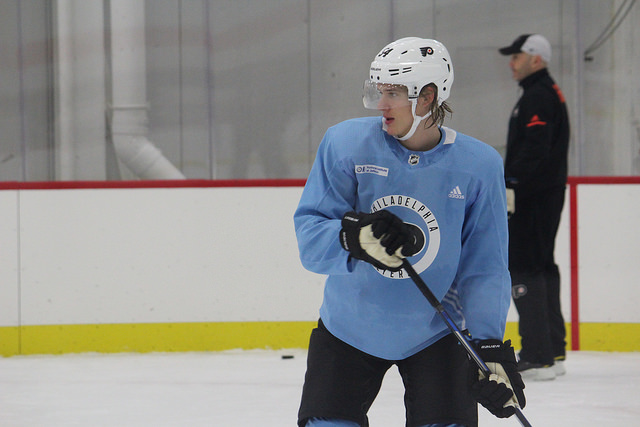 It took 11 seasons, but someone has finally hit more home runs than Ryan Howard did in 2006, when his 58-home run season led him to the National League MVP.

Giancarlo Stanton of the Miami Marlins hit his 58th and 59th home runs in the team's 7-1 win over the Atlanta Braves Thursday night: 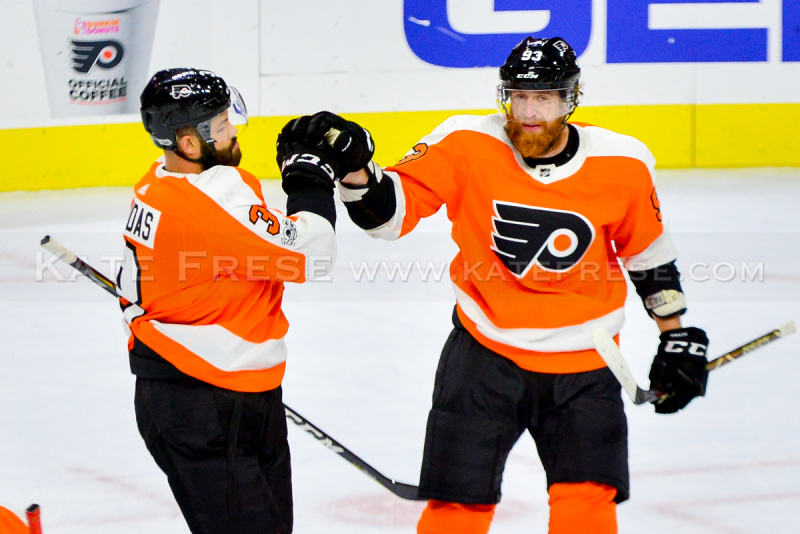 The Philadelphia Flyers needed to gear up for the regular season Thursday night and did so with style as they beat down the Boston Bruins 5-1.

The Philadelphia Flyers came into their seventh preseason game looking to get into regular season mode. The Orange and Black seemed more than ready as they handed the Boston Bruins a 5-1 beat down.

Nearly everything went right for the Flyers in this contest. The first line of Claude Giroux, Sean Couturier and Jake Voracek looked great as they combined for six points and had a hand in four of the Flyers five goals.

The second power play unit got things started as great puck movement from the point to Nolan Patrick allowed Couturier to swiftly find Travis Konecny in front of the net and beat Boston goaltender Tuukka Rask with a tap-in to put the Flyers up 1-0.

As the opening frame was expiring, Voracek extended the lead to two after collecting a Radko Gudas rebound that squirted pass a Boston player in front of the net which gave Voracek an open shot from the circle.

In the second period, Voracek sent a great east-west pass in the Bruins zone to Brandon Manning and the Philadelphia defender lifted it over Rask's shoulder to put the Flyers up 3-0.

Voracek and Couturier each finished with a goal and an assist while Giroux collected two assists as it appears this top line may stick around for Opening Night.

Young players like Patrick and Sam Morin provided more evidence that they belong on the roster as well. Morin showed great puck control and hands as he deked multiple Bruins defenders to set up Wayne Simmonds with a beautiful pass to give Philadelphia a 4-0 lead.

Couturier continued to excel during the power play as Konecny returned the favor from the first goal giving the centerman an easy goal in front of Malcolm Subban early in the final frame.

Aside from his assist on the power play, Patrick was just a goal away from a Gordie Howe hat trick as he dropped the gloves in the second stanza with David Krejci. After his scrap, Patrick was met with a chorus of cheers and the Philadelphia faithful chanting his name.

The game could have swung in a different direction though as the first period had more scoring but nothing that was allowed on the scoreboard.

The Bruins thought they had two goals but the first was called back on a handpass as Brad Marchand received a pass up high from Patrice Bergeron. The Bruins star winger batted the chest-high puck to Anders Bjork, who deposited the puck past Alex Lyon. The goal was immediately waived off.

Simmonds thought he was going to open the scoring for the Flyers on the power play, but his tally was reversed as he tapped the puck above the crossbar.

The second took some more time to reverse. With 5:49 left in the first, Bruins defenseman Rob O'Gara sent a point snapshot on net which eeked by Lyon. However after Flyers head coach Dave Hakstol challenged the play for goaltender interference, it was determined that Jake DeBrusk prevented Lyon from making the stop.

Michal Neuvirth was set to start but due to illness served as the backup. Lyon made 31 saves in his last-minute, complete game starting effort. However, his two-period shutout attempt was ruined in the final frame when Krejci sent a snap shot over Lyon's shoulder early in the period.

The Flyers will conclude their preseason with a 5 p.m. affair with the New York Islanders on Sunday. The game will be televised on The Comcast Network and the NHL Network.