Eagles Flyers Phillies Sixers About Us Write For Us
Nola, offense crush Marlins in victory
Phillies should make call on Marcus Stroman this offseason

Flyers Fall to Islanders in OT in Rookie Game 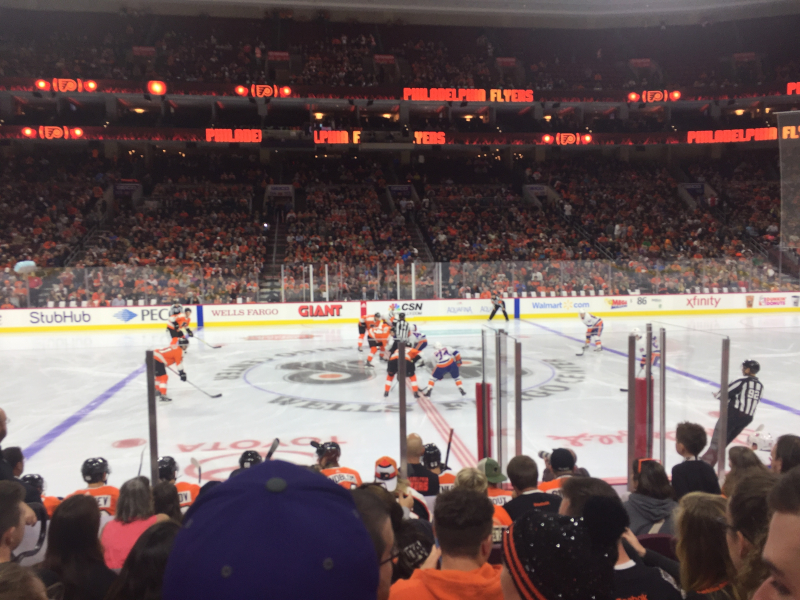 The Flyers came out roaring with 18 shots in the first period to the Islanders eight. In the third, the Islanders answered back with a 15-2 shot advantage, and the two goals needed to force overtime.

The Islanders erased a 3-1 deficit in the closing minutes of the third and after surviving another flurry of chances in overtime, Mitchell Vande Sompel scored on a two-on-one to give the Islanders a 4-3 overtime win over the Flyers in the Rookie Game on Wednesday night at Wells Fargo Center.

The Flyers opened the scoring with a shorthanded goal by James DeHaas. Right after an Islanders penalty expired, DeHaas threw a shot on goal that leaked through Eamon McAdam to give the Flyers the 1-0 lead.

The Islanders tied things up with a goal by John Stevens, son of the former Flyers head coach, on a nice setup by Michael Dal Colle.

The Flyers regained the lead later in the first. Off a couple of good scoring chances in close, Travis Sanheim got the puck behind the net and banked it in off of McAdam to make it a 2-1 Flyers lead.

After the first period, the Flyers had an 18-8 shot advantage.

The second period was a much more physical affair. Sam Morin and Yannick Turcotte got into it with a wrestling match that resulted in matching roughing minors. There were several other scrums in the period as well.

The lone goal of the period came courtesy of Mark Friedman, who fired a one-timer past McAdam off a nice feed from Mikhail Vorobyev. The Flyers only managed five shots in the second period, but held a 3-1 lead through 40 minutes.

Carter Hart, who entered midway through the second period, was the story for most of the third, tracking the puck well and making several saves in tight.

It wasn't until the later stages of the third that the Islanders could finally solve the Flyers 2016 second-round pick.

The Islanders got within one with a great centering pass from Willie Raskob to Arnaud Durandeau for an easy slam dunk.

With under two minutes to play, the Islanders pulled the goalie and tied the game seconds later as Sebastian Aho lifted a rising backhand over Hart to even things up and force 3-on-3 overtime.

The overtime featured several close calls for the Flyers. Connor Bunnaman was robbed twice, once on a breakaway and again on a follow-up chance with a delayed penalty call. He was awarded a penalty shot and stopped by Mitch Gillam.

Nolan Patrick found himself with a chance from the slot soon after and caught iron with his chance.

That was as close as the Flyers would get, as moments later, the Islanders would get a two-on-one with Mitchell Vande Sompel firing a shot past Hart to end the game.

Vorobyev was the only Flyer with multiple points, picking up two assists. Dal Colle also had two assists for the Islanders.

Philippe Myers left the game with a lower-body injury and did not return for precautionary reasons.

Alex Lyon played the first half of the game and stopped 13 of 14 shots faced. Hart stopped 19 of 22 he faced.

The Flyers now head for main camp and the preseason. Main camp begins on Friday. The team opens the preseason against the Islanders on Sunday.