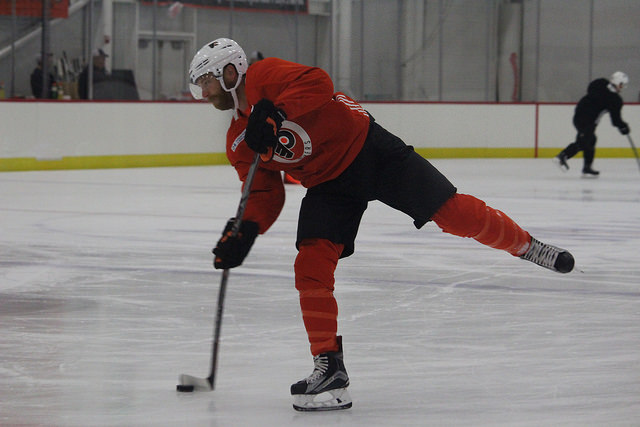 The Flyers held another energetic practice session on Sunday morning ahead of back-to-back games with the New York Rangers on Monday and Tuesday as the preseason continues.

The big development from Sunday's practice was another day of Claude Giroux on the wing. The experiment will continue on Monday when Dave Hakstol gets his first look at Giroux at left wing in a game.

The Flyers captain will play on a line with Sean Couturier and Jake Voracek.

The Flyers started showing Giroux at left wing last week, but quickly moved him back to center in time for Thursday's game against the Bruins. After an off day on Friday, Giroux spent Saturday and Sunday back on the wing.

"If it happens tomorrow and it goes well, it's obviously an option that we're going to look at this year," Giroux said.

"Entering the zone, he's got so many different options," Hakstol said. "He's a guy that can make plays on his backhand entering the zone, if there's soft ice available inside of the line, he can delay and make plays back through the middle. He's got so many options there that he's able to create because of his skill set. And defensively, coming off that left side, it's a good spot for him, coming out of our zone and through the neutral zone."

Giroux will, of course, still take face-offs and be a focal part of the top power play unit.

With two more days of practice in the books, the final week of training camp and the preseason begins on Monday. The Flyers will play four games during that time, concluding the preseason next Sunday against the Islanders.

After making roster moves on Thursday and Friday that trimmed the roster significantly, there really isn't much left to do for Ron Hextall to name a final roster. The Flyers still have 26 healthy players in camp, meaning three cuts still need to be made.

With four games left, it sounds like very little work is needed, but at this point, no cut will be easy.

"We have a tough roster to crack right now, which is good for us," Hextall said on Saturday. "Our big guys have to play, so we're getting ready for the season now. There's still players in the mix, but you get down as quick as you can and go from there."

The Flyers are set in goal with Brian Elliott and Michal Neuvirth being the only goalies left with the Flyers after Alex Lyon was sent to the Phantoms on Saturday.

Defensively, the Flyers have eight on the roster, meaning one still needs to be cut. All three potential rookies in the running for roster spots -- Sam Morin, Robert Hagg and Travis Sanheim -- are the ones in the running for seemingly two spots, but Hextall didn't rule anything out involving any combination of the three.

Among the forwards, bubble players include Phantoms veterans like Taylor Leier and Scott Laughton as well as rookie Mike Vecchione and high-profile prospects Nolan Patrick and Oskar Lindblom.

Laughton seems to have a spot locked up given the Flyers offseason course to keep him and his line placement with Matt Read and Michael Raffl.

Hextall said Patrick wouldn't be guaranteed a spot in the weeks leading up to camp, and provided a bit of a push last week saying they wanted to see him elevate his game. A strong performance in Boston and a highlight-reel assist on Shayne Gostisbehere's game-winning goal in Allentown have turned heads. It also helps that like Laughton, Patrick has spent most camp practices on the same line with Wayne Simmonds and Jordan Weal.

Leier has been impressive in the preseason, especially in games in Allentown and Boston, but with roster spots hard to come by, it's more of a question of finding a place for him than anything else.

Hextall didn't sound as high on Vecchione getting a roster spot. Vecchione is waiver exempt, so he can fall to the Phantoms easily and would most likely get more playing time in the AHL. At the moment, he seems to be the most likely of the forwards to be cut.

And then there is Oskar Lindblom. For much of camp, Lindblom has skated with Giroux and Voracek and played on the top power-play unit on Thursday. But at practice on Saturday and Sunday, Lindblom skated with the group of extras that included Leier, Vecchione and Travis Konecny.

"Like everybody else, he’s working hard," Hakstol said of the Swedish prospect. "He’s got all the abilities and it’s a matter of just continuing to elevate his play and do those things on a regular basis. He’s working hard to do that. I’ve been happy with his effort."

You can read into that as much as you would like. Hextall provided a similar push to Nolan Patrick earlier this week, almost as a way to pump the breaks on the hype around the second overall pick being a lock for the team after just one preseason game.

The same now goes for Lindblom, who through more than half of training camp and the preseason hasn't faced much adversity in his quest to make the final roster. This could very be the push the Flyers front office and coaches are giving him ahead of a crucial final week of games and practices.

Lindblom was among a handful of players who stayed on the ice well after Sunday's practice had officially concluded. Most of the younger players -- Weal, Konecny, Patrick, Vecchione, Leier, Sanheim, Morin -- were the last of the skaters on the ice.