How could Claude Giroux benefit from a move to the wing? 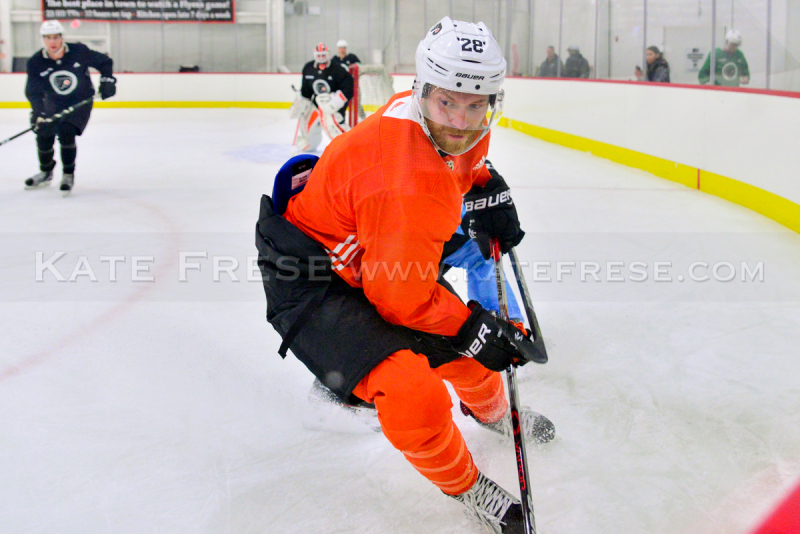 When the Flyers took the ice for another day of training camp on Tuesday, Claude Giroux and Jakub Voracek took the ice on the top line. Absolutely not, by any means, the biggest surprise -- both players have been two of the top line players since camp opened, and it figured to stay that way until camp opened.

There was a slight twist to that arrangement, though.

Giroux was shifted over to the left wing. Sean Couturier took his place as center, and the unit continued on. While Giroux has long been the top-line center, coach Dave Hakstol got the idea to move him to wing, and the captain embraced it. It's not a move that's wildly outlandish, either.

When Giroux first cracked the Flyers lineup in the halcyon days of John Stevens, Mike Richards, Jeff Carter and Danny Briere, he had no choice but to get started on the wing. But by the time his second full season wrapped up as a Flyer in 2010-11, his center responsibilities continued to pick up, and entering the 2011-12 season, it was time for him to embrace the role as full-time first line center.

Giroux was drafted as a right winger by the team in 2006, and the shift to center is a tough one to make. Giroux notwithstanding, moving from center to wing is a rather common move, but the move from wing to center isn't easy. The fact he was able to do so that early in his career is a testament to the skill level he could provide.

The move also gives the Flyers some scoring punch at the wing. Aside from names like Voracek, Jordan Weal, Travis Konecny and Oskar Lindblom (who is still a question mark for now, though touted), the Flyers could use some scoring help on both wing positions. Moving Giroux allows several of those guys to embrace secondary scoring roles.

One aspect that does stand out, though, is Couturier's move to the top line. Couturier has established himself as a steady defensive pivot, and the conventional wisdom surrounding him is that he is still due for an offensive breakout. Couturier's never scored more than 15 goals in a season, and has yet to top the 40-point mark. His offensive numbers will absolutely flourish while playing alongside two skill guys in Giroux and Voracek, and if worse comes to worse, he can still settle in the third-line center role he excels at.

Giroux is also coming off a down season that saw him finish with 14 goals, 44 assists and 58 points. That's the lowest amount of goals he's scored in a full season, and his lowest full-season point total since his first full year in 2009-10 (47). While he's previously attributed a decline in production to injury -- which is valid -- it's clear Giroux needs a change of pace, and a move to the wing can help him out.

Moving from center to wing is a time-tested strategy in hockey, usually to provide a spark in the lineup or round out scoring punch. Giroux won't be the first Flyer to do so, and he surely won't be the last. It's not exactly innovative, but it can still work for Giroux and the rest of the team.

Entering his third season behind the Flyers' bench, Hakstol has a pulse by now on what the team's needs are, and has seen that Giroux decline first-hand. Moving to the wing would surely take some time for Giroux, but it's a bold move that could absolutely pay dividends for the Orange and Black in 2017-18.