Milner, Morgan continue to be bright spots in the Phillies bullpen 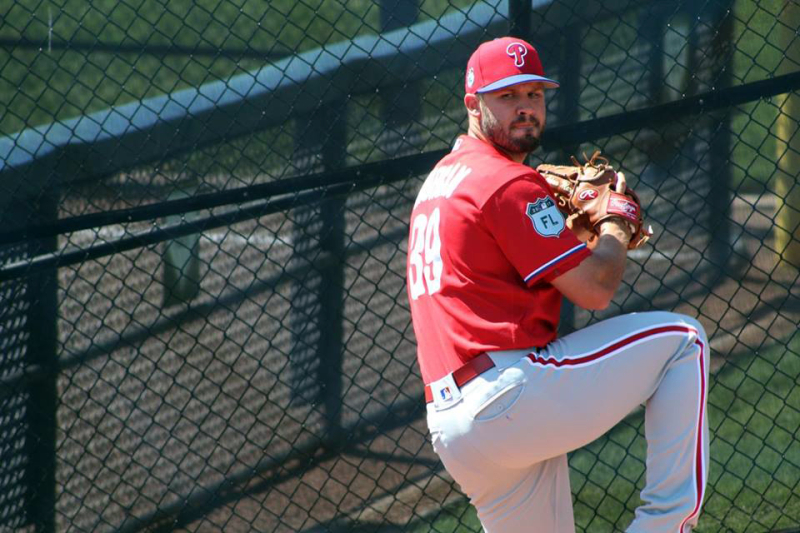 The Philadelphia Phillies have gone through their fair share of pitchers this season. 31 to be exact after Henderson Alvarez's debut on Sunday afternoon against Oakland. They've had 11 different starting pitchers, due in large part to injuries, while also shuffling through a handful of guys from Triple-A and off waivers for the bullpen. Two relievers have been impressive throughout the second half of the season and have likely done enough to secure themselves a spot in the 2018 bullpen conversation. Southpaws Hoby Milner and Adam Morgan have become more than reliable options in relief and with each of them throwing left-handed, it makes the Phillies need one less thing on the pitching staff come 2018.

Hoby Milner is a guy who's been in the Phillies organization for a while. He was drafted by the Nationals in 2009, but didn't sign, so the Phillies plucked him in the seventh round of the 2012 draft. Milner was primarily a starter through 2014, but converted to relief to begin the 2015. He really ramped things up to start 2016 with Double-A Reading, posting a 1.84 ERA in 38 appearances before being promoted to Triple-A. During the offseason prior to the 2017 season, the Phillies decided not to protect Milner from the Rule-5 draft and he was picked up by the Cleveland Indians. Luckily for the Phils, he didn't make the Indians' 25-man roster and was returned to the Philadelphia minor league system.

"It's been pretty weird," the 26-year-old left-hander said with a laugh. "Getting Rule Fived was a blessing for me. It was a win-win situation. If I stayed with the Indians, I was going to be in the big leagues. If not, they kind of put me on the radar and let me know that a bullpen like that wanted me. [Phillies.com]

In 22 games with the Ironpigs, Milner posted a 2.60 ERA, striking out 27 and walking just four. On June 20, the Phillies called Milner up to the big leagues. He allowed just one run over his first eight appearances, good for an ERA of 1.80, but stumbled his next two times out, surrendering four runs in 4.2 innings. Since then, he's been lights out and has now put together 21 consecutive scoreless appearances, dating back to the end of July.

"Coming back, no hard feelings for not being protected or anything. I'm just glad they gave me an opportunity to pitch in the big leagues." [Phillies.com]

Meanwhile, Adam Morgan has found a way to make himself a serious part of the Phillies bullpen moving forward. Prior to the second half of this season, Phillies fans pretty much knew what they were going to get with Morgan in the game. The 27-year-old would get time in mop-up duty while also getting sent down and called up on numerous occasions. Then something happened. Morgan worked with Phillies coaches and changed the grip on his slider and it's made a heck of a difference.

In 21 appearances during the second half of the season, Morgan is 3-1 with a 2.22 ERA over 28.1 innings of work. He's struck out 33 and walked nine and the opposition is hitting just .210 against him, 84 points lower than what they were hitting in the first half of the season.

Morgan allowed 11 runs in his first two appearances this season and a resurgence seemed all but a fantasy, but due to injuries and lack of depth in the bullpen with left-handers, Morgan got more opportunities to prove that he still has it and he's done that and more. Since moving to the pen, Morgan has upped his velocity to where it was before his early-career elbow surgeries while also being able to work more on his secondary pitches. Good health, opportunity and remembering to stick to his strengths are just a few reasons why Morgan has found success in the current role.

“I think it just boils down to just sticking to your strengths. That was a turning point to me. Instead of thinking about the hitters’ weaknesses, you just stick to your strengths and attack them with your strengths. It doesn’t matter if they are good change-up hitters. They haven’t seen my change-up. And I am not going to change until they show me otherwise.” [Delcotimes.com]

With 13 games remaining, both Morgan and Hoby Milner will get to further prove they belong in the big leagues come 2018 and the Phillies should be happy to see these pieces come together in a season that could reach 100 losses.