Eagles Flyers Phillies Sixers About Us Write For Us
Previous month:
August 2017
Next month:
October 2017 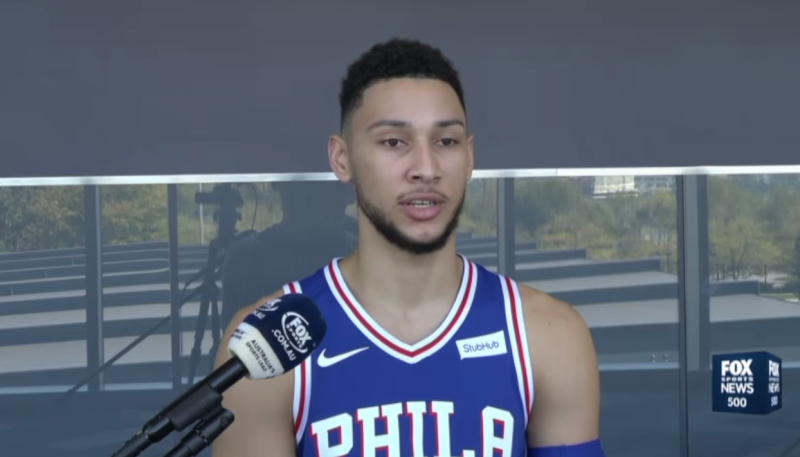 If you are a sports fan and have social media, it's not surprising that 75 percent of what people are talking about these days are anthem protests, disrespecting the flag, equality and unity just to name a few. In addition, people are talking about whether or not President Donald Trump has taken the right approach to the topic, posting his thoughts and views on it via Twitter.

NBA Board of Governors pass draft lottery reform, will begin in 2019

For the better part of the last four seasons, the Philadelphia 76ers have been a team in a tank/rebuild phase, putting together a roster of guys with a small chance at winning a large amount of games, winning just 47 games in three seasons prior to 2016-17. Throughout the process, the Sixers' struggles on the court made fans hopeful that the team would find their next franchise star with a high pick in the draft. Philadelphia, over its last four seasons, has selected Joel Embiid, Jahlil Okafor, Ben Simmons and Markelle Fultz and three of guys look to be playing a big part in the future. With a healthy Embiid and Simmons paired with rookie Markelle Fultz and veteran JJ Redick, the tanking years are clearly in the past. There are now expectations after a 28-win campaign last season. Players want to come here.

Continue reading "NBA Board of Governors pass draft lottery reform, will begin in 2019" »

As the preseason draws to a close and the regular season looms, the last two preseason games for the Philadelphia Flyers loom large for those wishing to crack the opening night lineup.

The likes of Scott Laughton, Sam Morin, Travis Sanheim and even veterans Matt Read will need to pull ahead of the pack starting tonight at 7 p.m. against the Boston Bruins at the Wells Fargo Center in order to do so.

In the latest edition of the K-Lot Podcast on SportsTalkPhilly.com, Denny Basens is joined by Tim Kelly and Tucker Bagley to discuss which team is the best in the NFC East currently and to preview the Philadelphia Eagles matchup with the Los Angeles Chargers.

The K-Lot Podcast is presented by SportsTalkPhilly.com and can be downloaded on SoundCloud and iTunes.

The Eagles were expected to have an offensive line that would rank in the top of the NFL entering this season. Through the first two weeks the Eagles had not met that expectation - especially in week two against the Kansas City Chiefs.

A major part of the debacle in week two was the play of second-year guard Isaac Seumalo. Seumalo allowed four sacks against the lauded Kansas City defense. Furthermore the team struggled to run the ball in the first two weeks of the season - which falls heavily on the play of the offensive line.

The Eagles opted to make a change on the offensive line - specifically at the left guard spot - for week three against the New York Giants, and the change paid dividends.

Over the entire process, fans have taken a liking to a handful of players. Joel Embiid, Dario Saric, Nerlens Noel and TJ McConnell just to name a few. Embiid and Saric are locks to make the Sixers roster this season, Nerlens recently signed a one-year deal with Dallas, and TJ? Well, his future remains to be seen. Training camp gives players the opportunity to fight for roster spots and there should be some close battles heading into the preseason with McConnell in the thick of the fight to earn a place on the Sixers.

"I'm going to fight for my life and fight for my minutes like I've been doing at each training camp," McConnell said on Monday prior to the first day of camp.

Let's first take a look at who is an active roster lock:

In the 2012 NHL Entry Draft, the Flyers used the 20th overall selection on Scott Laughton, a two-way center from the Oshawa Generals. Laughton's pro comparison was Mike Richards, a former Flyers captain and perennial Selke candidate at that time in the NHL.

Now five years after his draft year, Laughton is still looking to earn a role on the NHL roster -- a much longer road to the NHL than is anticipated for first-round prospects. With only a handful of cuts remaining before the Flyers set the opening night roster, Laughton has taken huge steps in starting the season in the NHL again.

Phillies come from behind to beat Nationals

PHILADELPHIA — The Philadelphia Phillies (64-95) were looking to win both tonight's game as well as their final series against the Washington Nationals (95-63) this season. After a battle of the bats, the Phillies came out on top. Mark Leiter Jr. struggled in his final start of the season, allowing five runs on eight hits over four and 1/3 innings. The bullpen, including Yacksel Rios who earned his first Major League win, combined for four and 2/3 innings pitched, zero runs allowed and seven strikeouts. Closer Hector Neris recorded his 20th consecutive save. He's the first Phillie to convert 20 or more consecutive saves in a single season since Brad Lidge in 2008.

The Phils offense picked up Leiter and the 'pen. Aaron Altherr, Odubel Herrera and Jorge Alfaro combined for six hits, three runs scored and six RBI. With two walks tonight, Rhys Hoskins reached 23 for the month of September. He's the first rookie to have 23 walks in a single calendar month since Ed Bouchee in July of 1957. Even when Hoskins isn't picking up hits, he's still finding ways to get on base and contribute, which will be extremely important for the team moving forward.

Continue reading "Phillies come from behind to beat Nationals" »

The 3 Most Painful Phillies Losses of 2017 Season

Though the Philadelphia Phillies won't lose 100 games this season, the 2017 season hasn't been short on losses, many of the painful variety. In a season where the team has lost 95 games, there were plenty of losses to choose from for the most painful, but SportsTalkPhilly.com has narrowed it down to the three worst losses of the year.

The good news is that all three of these losses came in the first half of the 2017 season. The bad news? That didn't make the losses less painful at the time.

Continue reading "The 3 Most Painful Phillies Losses of 2017 Season" »

When the Sixers brought in Jerryd Bayless to become a member of the team, he brought a level of maturity and experience that the team had hoped would build up a team that was struggling due to the "Process years."

Unfortunately, Bayless has not been known to be one of the healthiest players out on the court. The Sixers signed Bayless to a contract during the 2016 offseason. In December 2015 and beyond with the Milwaukee Bucks, Bayless missed time on three separate stints due to a left ankle sprain, a re-injury and finally a left knee injury.

While not the same injury as before, Bayless was hit with the injury bug this past December with a torn ligament in his left wrist that required surgery. Bayless played only three games for the Sixers last season causing T.J. McConnell to receive more reps on the team and getting even greater looks.

But with Bayless back now, and looking healthy for the first time in a couple years, he has a chance to be a solid backup player for this Sixers team. A role they had envisioned for him last season, though never coming to fruition.

Head Coach Brett Brown speaks highly of the 29-year-old journeyman, and hopes that his role with the team will be a lot more valuable than just filling a roster spot.