Phillies Nuggets: What will team's Opening Day infield be in 2018?

In the Philadelphia Phillies 9-1 win over the New York Mets Tuesday evening, the starting lineup perhaps offered a glimpse into the future.

J.P. Crawford, making his major league debut, played at third base, rather than his natural position of shortstop. This allowed Freddy Galvis to remain at shortstop. Cesar Hernandez, who is hitting .284 this season, started at second base, though it's unclear what his future with the team is with Scott Kingery looming. And Rhys Hoskins, who has spent much of his early time in left field, played his natural position of first base.

With a surplus of infield talent, yesterday evening's lineup makes you wonder what the team's infield will look like to open up the 2018 season.

Is there really a question here?

Perhaps more encouraging than his power surge is how good of an approach he has at the plate. He's currently averaging 4.43 pitches-per-at-bat, which would put him among the league leaders if he were to continue that approach out for a full season.

It's unclear what's going to happen with Tommy Joseph. It seems hard to imagine the Phillies keeping him as a bench piece, because Hoskins will seemingly play 150 plus games in 2018 and Joseph can't play another position. There seemed to be next-to-no interest in Joseph prior to the league's non-waiver trade deadline, but you get the sense that Joseph will probably be playing for an American League club in 2018.

The debate at this position seems to be between Cesar Hernandez and Scott Kingery, though I'm not sure it's that simple.

First on Hernandez: I think he's one of the 10 best second baseman in the league. I do think he's underachievered as a baserunner, because he's a great runner, but that hasn't translated to him being a great base runner. With that said, since the start of the 2016 season, I think he's been the team's most steady hitter (that's, of course, of players who have been on the team that entire time). According to FanGraphs, he's been the second best fielder at his position over the time, behind only Dustin Pedroia.

But, I do think he's probably going to be traded this offseason, because Kingery has had such a great ascension through the upper levels of the minor leagues that one scout compared him to the aforementioned Pedroia.

It's possible that Kingery is the team's Opening Day starting second baseman next year, but it may be more likely that he starts the season in Triple-A. If the Phillies kept Kingery in the minor leagues to open the season, like the Chicago Cubs did with Kris Bryant in 2015, they could avoid him being on the major league roster for more than 171 days, which would give them one more year of team control over him. If they did that and didn't place him on the 40-man roster until he was finally called up, it would also keep them from using up one of his options.

If that's the route the Phillies go and we assume that Hernandez is dealt, they will need someone to play second base until Kingery comes up. That could very well be Galvis, who has experience at second base. Milwaukee Brewers second baseman Neil Walker is a veteran that the team could possibly target this offseason on a one-year deal.

Regardless of who starts the season at second base, expect Kingery to get the bulk of the playing time. 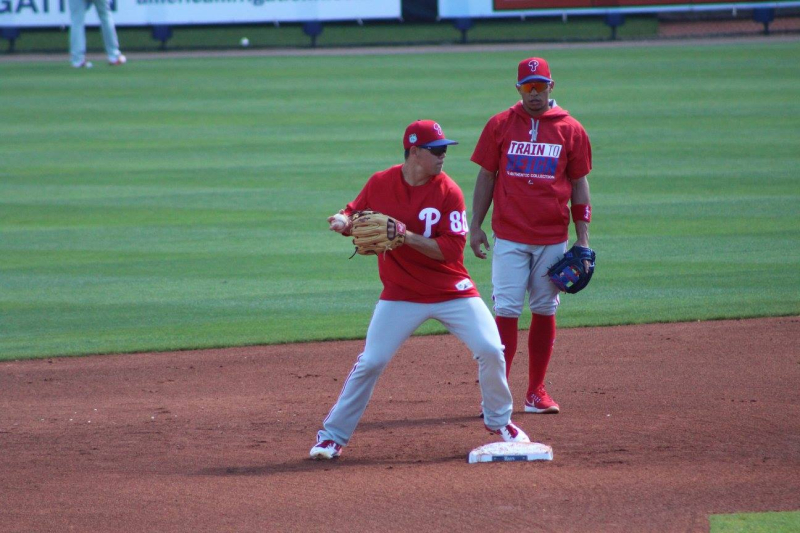 Freddy Galvis is easily one of the 30 best starting shortstops in the league, but on a contending team, he's probably more likely to be a super-utility man. With this and mind, and a strong second half from J.P. Crawford, the safe money here is on Crawford.

Unlike Hernandez, I do expect Galvis to be with the Phillies to open the 2018 season. He's an elite fielder, has become a leader in the clubhouse and if the coaching staff had their way, he would probably be their starting shortstop in 2018.

With that said, Galvis is a below-average offensive player, despite the pop that he has. That's left the door open for Crawford to usurp him at short.

If his first-half was any indication, Crawford isn't a lock to pan out. But he gets on-base at a high clip, which certainly pleases general manager Matt Klentak. Prior to his call-up to the majors, he also displayed some pop late in the season. He's not going to be as good of a fielder as Galvis is now, but Galvis was once a fielder with high upside that wasn't consistently making plays that he needed to in the field. Crawford isn't all that different, as we've certainly seen a few plays (here and here) that demonstrate the type of potential he has in the field.

With Galvis eligible for free-agency after 2018, it makes sense for the Phillies to hold onto him into next season. If Crawford pans out, the team can either trade him or begin to utilize him as a super-utility player. If Crawford doesn't pan out, they have a competent alternative.

Though Crawford played third base last night, we're operating under the assumption that he's going to be playing shortstop next season. That would mean that, assuming he is still on the team, this would be another position that Galvis may see some time at.

If the Phillies don't trade Hernandez, he or Kingery could eventually get a look at third base in 2018 as well.

But the Phillies are likely to give Maikel Franco one last chance to earn being the team's starting third baseman to open the season. Some have suggested that the Phillies trade Franco this offseason, but the idea of trading someone with the ceiling that he has after what's been a dreadful season makes little sense.

With that said, Franco is going to have a short leash. Despite still hitting for some power, he's slashing .223/.278/.387, has a -24.5 oWAR and despite occasionally flashing some leather at third, is probably more cut out to be playing at first.

What he showed in 2015, and even in a disappointing 2016 season, will probably buy him one last chance to open the 2018 season as the starter. But if he doesn't make good on that, he'll probably find himself on the bench in favor of Galvis or someone else.

Phillies need to get 2 free agent pitchers at minimum. And shore up bullpen 30 Plus one run game loses clearly shows the need.

If and it might be a big if , the Phillies get the number 1 pick they should still go for a hitter .

Beer ranked #3 might be that guy , Singer would take 2/3 years to reach majors most likely and if he is like Biddle the last #1 he will never pan out. Nola took 2 years and he is at best a 3/4 starter.

Stanton , is available and he would be a nice pieces Mike don't know the spelling of his last name , Royals 3 Rd baseman would also be a nice pick up.

They have money and some good young pitchers in A ball like Romero. Fatia , at Lakewood another left handed pitcher is coming. Sánchez , I thought might be good but I think he has attitude issues. He certainly has talent but bombed at Clearwater.

He is young for league , Monika faded playing 120 games , hopefully he bounces back. Randolph and Hasley are several years from being major league ready.