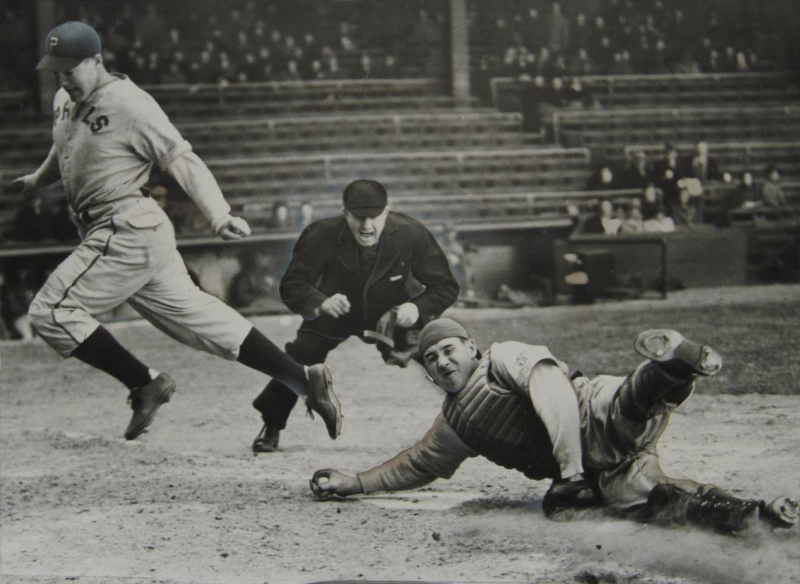 The Oakland Athletics will make a rare trip to Philadelphia for a three game series from September 15-17. No doubt that the overwhelming majority of fans at Citizens Bank Park will be more excited to receive a Rhys Lightning t-shirt during that series, but I'm thrilled for another reason: It will only be the fourth regular season series played between the Phillies and Athletics, and will serve as a faint reminder of the bygone City Series – exhibitions played between two Philadelphia major league clubs over the course of 71 years between 1883 and 1954.

Philadelphia was a baseball crazed city ever since clubs began to form in the city during the 1860s, most notable of which was the Athletic Base Ball Club of Philadelphia. The Athletics were among the 12 first fully professional clubs in 1869, were the first champions of the National Association of Professional Base Ball Players in 1871 and joined the newly formed National League in 1876.

The A's were expelled from the League that winter as a result of their refusal to go on a late-season western road trip. From 1877-1881, Major League Baseball was not played in America's second largest metropolis but that changed in 1882, when the newly formed American Association placed a club in National League-less Philadelphia. Team proprietors needed name recognition to sell tickets and chose to name the club the Athletics. The National League quickly took note and established a club in Philadelphia – the Phillies were born.

The first City Series contest was waged between these two clubs on April 14, 1883 at the Athletics' snazzy new grounds, Athletic Park, which stood a block from where the 1876 Athletics played in the first Major League Baseball game in history (also the site of the first interracial game in recorded history). Philadelphia newspapers estimated between 10-12,000 fanatics showed up for the exhibition, packing the stands while overflow crowds six people deep stood in the outfield. The Philadelphia Press noted that "The players were on the field for preliminary practice some time before the game began, and the audience gave audible criticisms on the merits of both nines." Audible criticisms. Evidently Philadelphia has been home to some of the toughest sports fans since the dawn of major league sports.

A badge of honor, no doubt. A city championship scorecard from 1883, located in the Hall of Fame Club at Citizens Bank Park (Matt Albertson/Sports Talk Philly)

The 1883 'Philadelphias' were a putrid team, finishing the season with a 17-81 record, while their inter-city rival Athletics finished 66-32 and won the American Association pennant. Despite their mirror opposite seasons, the Philadelphias actually won the city championship five games to four.

The American Association and the Athletics folded after the 1891 season, leaving the Phillies as the sole major league club in town until the upstart American League formed and a team was established in Philadelphia in 1901. The city championship was not waged until 1903, after the National League-American League war concluded when the the American League proved it was on equal ground in large part with the National League – both competitively and financially. Several Phillies stars jumped ship to the newly christened Athletics, most importantly future Hall of Fame infielder Napoleon "Nap" Lajoie, and formed the core of the 1902 American League champions – the first pennant winner in town since the American Association A's won their only pennant in 1883.

The reigning A.L. champion Athletics were expected to roll over the putrid Phillies, who finished the 1902 campaign seventh in the N.L. and drew nearly four times fewer patrons than did the Athletics. Veteran Lave Cross explained to the Sporting Life that the exhibitions with the Phillies would not be taken lightly. "The Athletic-Philadelphia games would not be mere exhibition or practice games, but local championship games, in which the players would be fully compelled to work fully as hard as in a critical stage of the National championship race." Just as the Phillies had in 1883, the 1903 Phillies surprised local fans by winning the city championship seven games to five games, split between spring and fall series.

In the ensuing years, Athletics manager Connie Mack built a perennial powerhouse, winning six American League pennants and three World Series titles before selling off star players and finishing a putrid 37-116 in 1916. The Phillies, on the other hand, won only one pennant in 1915 in a much reduced National League (a third major league, the Federal League, operated in 1914 and 1915 and drew numerous stars from both the American and National Leagues). The City Series was the only championship that either club could win in the late 1910s and early 1920s. The Athletics finished in last place for six straight seasons from 1915-1921 while the Phillies first run decent baseball only lasted from 1913-1917 and were soon again back in the National League basement. After finishing in second place in 1917, fearing America's entrance into the Great War that year, the club traded star pitcher Grover Cleveland Alexander in 1918 to the Chicago Cubs. With their star player gone, the club sank back into the doldrums, finishing in the second division every year from 1918 to 1931. Although both clubs typically finished in their respective leagues' cellars, the Athletics typically outdrew the Phillies. Both clubs fielded forgettable rosters in the late 1910s and early 1920s.

Connie Mack reversed his club's fortunes beginning in the mid 1920s, while the Phillies were still mired in the second division. In 1928, the City Series was played between two squads with exceptional talent. Pinky Whitney, Cy Williams and Jimmie Wilson for the Phillies and Connie Mack's revamped roster with aged greats Ty Cobb, Tris Speaker, and Eddie Collins combined with budding young talents Lefty Grove, Mickey Cochrane, Al Simmons, and Jimmie Foxx. In total, seven future Hall of Famers took the field in the 1928 City Series.

The clubs opened the 1928 city championship on March 31. Philadelphia Inquirer columnist James Isaminger wrote that "ten thousand solemnly garbed addicts dueled with the flue, laryngitis, and kindred ailments to see the lately returned warriors, their faces walnut-stained from Florida sun…The unleashed followers had full recompense for their bravery and discomfort." 40-year-old Tris Speaker hit an inside the park two run home run, while Lefty Grove paid no mind to the incredibly frigid temperatures, as he hurled his powerful fastballs past Phillie hittiers.

The Athletics' rise from cellar dweller to world champion again swayed the Philadelphia fanbase in the mid 1920s and early 1930s, making the Phillies second class tenants once again in their own town. The Athletics placed second in 1925, 1927, and 1928 before reaching the fall classic in three straight seasons from 1929-1931. They finished an astounding 19 games behind the first place Murder's Row 1927 Yankees. Two years later, the Athletics repaid the favor as they won the American League pennant 18 games ahead of the same Yankees. The 1929 Athletics, not the 1927 Yankees, are considered by some baseball historians to be the greatest team in baseball history. The 1929 Phillies paled in comparison, finishing fifth in the National League with a 71-82 record – their best finish since placing second in 1917.

The irregular finish by both clubs in 1929 clearly boosted fan interest and large crowds came out the watch the City Series in 1930. An estimated 20,000 fans packed Shibe Park in early April as the defending World Champions crushed their intercity rival 13-1. Despite the offensive outbursts by the Athletics in games one and three, the Phillies took the five game series, 3 games to 2 games. Were the lowly Philadelphia Phillies the kryptonite that brought the dominant Athletics to their knees? Yes. The Phillies always seemed to make the terrific A's teams look mediocre to bad in the 1880s and early 20th centuries. Although nobody knew it at the time, the final City Series was waged in 1954. The teams met twice in April, splitting both games and waited to determine the city champion on June 28 in the seventh annual Junior Baseball Federation of Philadelphia benefit game. The nightcap was played in miserable weather as rain caused a 41-minute delay. The Phils beat the Athletics that night 3-2 and again took possession of the Ellis A. Gimbel trophy before a crowd of 15,993.

With a few exceptions, the Philadelphia was primarily an Athletics town. Speak to a seasoned Philadelphia baseball fan and they will tell you that the wrong team moved away. Connie Mack and his sons sold their stakes in the team after the 1954 season and after serious, contentious discussions, the American League agreed that the best possible way to preserve the club was to move it to Kansas City, leaving the Phillies as the sole major league tenant in Philadelphia. The City Series was an age-old tradition in Philadelphia that many Philadelphians cherished, despite typically poor weather conditions. It signaled that baseball season was just around the corner. Although the Phillies were arguably the worst National League franchise in the first half of the 20th century, their fans could celebrate City Series championships against some of the most powerful teams that Major League Baseball had to offer. I imagine most Phillie fans would rather the roles were reversed.

So if you are able, get out to Citizens Bank Park this weekend and attend one or both of the games against the Athletics. It's a rare matchup that means more in terms of Philadelphia baseball history than any other interleague contest.