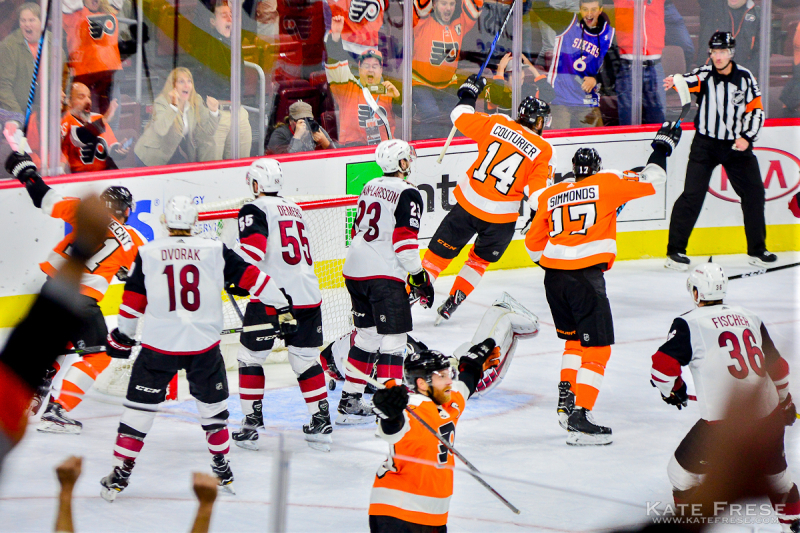 For 59 minutes, the Flyers struggled to put anything into the net or really even generate chances as the Arizona Coyotes zeroed in on their first win of the season in their 12th game. With two quick strikes, the Flyers managed to force overtime.

That was certainly a moral victory, but the satisfaction of a late rally was put to bed in the final seconds of overtime as the Coyotes scored to win their first game of the season after all by a score of 4-3.

"Right now it’s pretty frustrating the way we lost, but at the same time it’s a big point that we didn’t deserve at all, and to get a point like that might be huge at the end of the year so we will take every point we can get, especially these ones where we don’t really deserve it." - Flyers forward Sean Couturier

"First and second, second was a little better, but first wasn’t the way we wanted it. Especially in our building that stuff can happen. You have got to love the way we came back. Our third period was our best period by far. We just have to play like that for 60 minutes." - Flyers forward Claude Giroux

The game-tying goal by the Flyers, started by the great keep by Provorov, then a quick pass to Giroux who centers and catches the stick of Couturier for the equalizer.

At even strength, the Flyers were absolutely dominated in the first period. Arizona had a 71.43 CF% in the opening period and took a 2-0 lead. The Flyers similarly controlled the third. Even though their chances weren't always the most threatening, they had a 73.33 CF% in the third period, and the two late goals helped them pull even with the Coyotes.