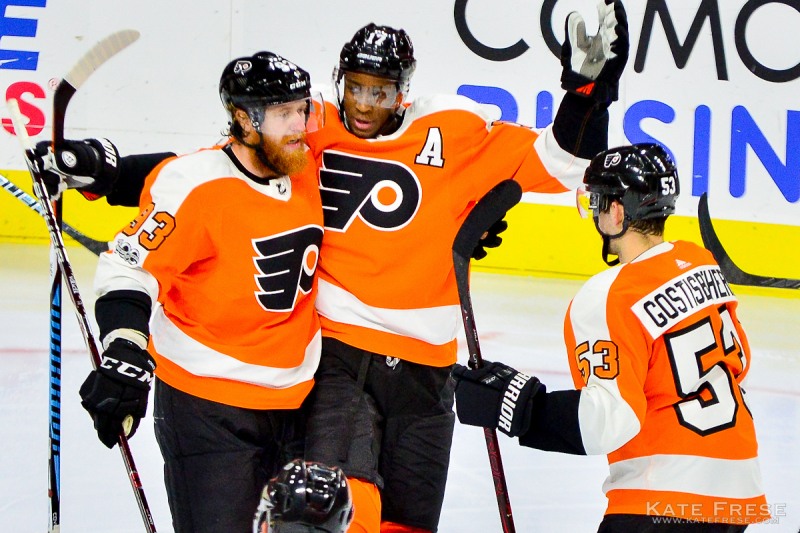 After four games on the road, the return home was a sweet one for the Flyers.

The Flyers opened up their home schedule with a bang, scoring three goals in the second period and three more in the third to take a dominating 8-2 win over the Washington Capitals on Saturday night at Wells Fargo Center.

The Flyers opened the scoring in the first at the 7:18 mark. Claude Giroux made a nice stretch pass to Jake Voracek. Voracek entered the zone and centered to Sean Couturier in front. Couturier's initial shot was blocked, but he was able to control the rebound and score to give the Flyers a 1-0 lead.

The Capitals answered back just over two minutes later. Using some quick passing, Washington got the puck to the front of the net where Jakub Vrana had an easy tap in for the tying goal at 9:25 of the period. John Carlson and Evgeny Kuznetsov assisted on the goal.

Twice in the period, the Flyers were shorthanded, including an abbreviated Capitals power play with under two minutes left in the period. It was then that Scott Laughton made a play that would turn the game in the Flyers favor.

Laughton stole the puck from Carlson and charged ahead as Capitals goalie Philipp Grubauer charged out to poke it away. Grubauer's poke-check attempt came back to Laughton, who put the puck into the empty net for a shorthanded goal with 1:02 left in the first period. It was Laughton's first goal of the season.

The Flyers outshot the Capitals, 13-9, in the first period.

The goals really kept coming for the Flyers in the second period.

It started on the power play, as Voracek made two excellent moves on Madison Bowey, making his NHL debut, before the puck eventually rolled off his stick and straight to Wayne Simmonds. Simmonds didn't miss from in close for his fifth goal of the young season, and third on the power play.

Midway through the period, it was the first line getting it done again, as Couturier fired a turnaround shot that deflected off of Giroux's stick and in for the captain's second goal of the game.

The Capitals did answer back just 13 seconds later with Nicklas Backstrom scoring on Washington's first shot of the second period at 10:45.

Washington started to apply pressure through the rest of the period, but Brian Elliott was solid on the final six shots Washington took in the middle frame.

For good measure, the Flyers capped off the period with another goal. A nice tic-tac-toe passing play from Simmonds to Jordan Weal was finished off by Valtteri Filppula. It was Filppula's third goal in the last two games.

The scoring only continued for the Flyers in the third period, as three Flyers scored their second goal of the night.

First, it was Laughton ripping a shot past Grubauer for his second of the night at 8:28.

Just over a minute later, Couturier tucked his second goal of the game in behind Grubauer on a sneaky play that was initially ruled no goal, but after review counted to make it 7-1.

Finally, with just five minutes to go, Giroux scored his second of the night on a rebound to make it an 8-2 game.

Six Flyers had multi-point games. Giroux led the way with four points, two goals and two assists. Both Voracek and Shayne Gostisbehere had three assists. Couturier had two goals and an assist for a three-point night as well. Laughton and Simmonds each had two points as well.

Quietly, Elliott had a solid game in goal for the Flyers, making 21 saves on 23 shots and picking up his third win of the season. Grubauer faced 37 shots from the Flyers, stopping 29.

The Flyers are back in action on home ice on Tuesday night when they host the Florida Panthers. Game time is 7 p.m.