Eagles Flyers Phillies Sixers About Us Write For Us
Previous month:
September 2017
Next month:
November 2017 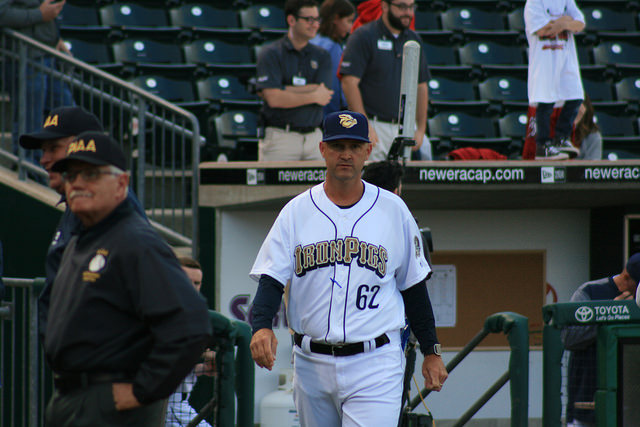 Will Dusty Wathan be on Gabe Kapler's staff in 2018? (Frank Klose/SportsTalkPhilly)

Less than a week ago, Dusty Wathan was competing with Gabe Kapler for the Philadelphia Phillies managerial vacancy. Come next April, the two may be coaching together in the Phillies dugout.

MLB.com's Todd Zolecki says that after finishing runner-up in the team's managerial search, Wathan will still serve some role in the organization next year as he remains under contract. He seems to think it could be on Kapler's staff at the major league level:

The Philadelphia 76ers declined to pick-up Jahlil Okafor's 2018-19 team option, meaning the third-year big man out of Duke will become a free agent at season's end. Don't expect Okafor to accept not playing though, as there are early indications that he could look into a contract buyout with the Sixers. He's slated to make just under $5 million this season.

Sources say Okafor may opt to push for a buyout agreement now that the former No. 3 overall pick will be an unrestricted free agent in July

The buyout seems like a plausible situation for Okafor, who probably wouldn't want to go into free agency having not played for the majority of the season with Philadelphia due to him not being in Brett Brown's rotation. It remains to be seen whether the Sixers decide to accommodate a buyout. Marc Stein also reports that Jah believes there have been opportunities for the Sixers to trade him, but nothing has come to fruition.

League sources say Okafor is convinced workable trades have been on the table for the 76ers, who’ve explored moving him since last season

At this point, it seems like it would be best for the Sixers to move on from Okafor sooner rather than later. The situation has gotten ugly once again. Last season, Okafor was told to stay home while the Sixers went on a road trip, indicating a deal was imminent. Bryan Colangelo was unable to get a deal done, so Okafor rejoined the team a couple of days later.

“It was awkward,” Okafor told SB Nation's Jordan Brenner. “I'm at home, watching my team play on TV, not a part of that team, but not a part of any other team. I was anxious. Eager to figure out where I was going to be. Kind of excited to have an opportunity to be with a new team and have a fresh start. Sad that I was leaving my teammates that I'd gotten really close with. And then I ended up playing the next night. I can't really put into words how difficult it was.”

After having a handful of off-court issues during his rookie season, Okafor has remained professional throughout this situation while also slimming down and cutting meat out of his diet. He had a strong preseason, but has only played in one game during the regular season. Dario Saric has gotten the nod at the five during games over Okafor, who will be the teams' fourth option at center once Richaun Holmes returns.

UPDATE (11/1, 11:45am) - After practice on Wednesday in Camden, New Jersey, Okafor confirmed he asked the Sixers for a buyout or to be traded and that he didn't want the Sixers to pick up his option.

Here were Jahlil Okafor's initial comments on the Sixers not picking up his option. pic.twitter.com/rOoJeWWmDO

The Sixers have yet to comment on the matter, but we'll update here if anything happens. If they cannot find a trade for the third-year big man, hopefully both sides can reach an agreement on a buyout to end this saga.

Tuesday is the last day NBA teams have to excercise team options for rookie scale contracts. The Sixers picked up options on Justin Anderson, Timothe Luwawu-Cabarrot, Dario Saric and Ben Simmons. According to Kyle Neubeck of PhillyVoice.com, the Sixers will not pick-up Jahlil Okafor's option, meaning he'll become a free agent this coming summer.

The Flyers took to the ice for a Tuesday morning practice ahead of back-to-back road games in Chicago and St. Louis on Wednesday and Thursday. The lineup appears to remain the same as this difficult back-to-back takes place.

GM Ron Hextall provided an update on the team's injuries heading into Wednesday.

Martin Prado could make sense as a trade target for Phillies

Though he may not be the potential Miami Marlins trade target that the Philadelphia Phillies are most connected to this offseason, Martin Prado could make quite a bit of sense for the team this offseason.

Jahlil Okafor's team option not among those exercised by Sixers

The Philadelphia 76ers officially announced on Monday that they had picked up team options for the 2018-19 season on James Anderson, Timothe Luwawu-Cabarrot, Dario Saric and Ben Simmons. Although they have until the end of the day today, October 31, it remains to be seen what the Sixers do with Jahlil Okafor. According to Keith Smith of FanRag Sports, teams usually exercise all of their team options at once, but Okafor was not included in the group mentioned above.

On Jahlil Okafor's 18-19 TO a source said "Usually they all get done at the same time by a team. His didn't. Read into that what you will."

Last week, head coach Brett Brown told reporters that Okafor is not in the teams' rotation as Amir Johnson has been and will be getting the back-up center minutes. Once Richaun Holmes returns, Okafor will likely be the Sixers' fourth option at center.

Meanwhile, a league source tells Keith Pompey of the Philadelphia Inquirer that trade discussions will determine whether or not the Sixers pick up Okafor's option for 2018-19. Jah would make $6.3 million next season if his option is exercised. If the Sixers do not pick up his option, he'll become a free agent in the summer of 2018, able to sign where he wants. The Sixers have been shopping Okafor a lot over the last two seasons, but the asking price seems the be an issue in making a deal.

Okafor has appeared in just one game this season, a 34-point loss to the Raptors, scoring 10 points to go along with nine rebounds off the bench. Although he's a liability on defense, Jah has lost 20 pounds and he put in a lot of work during the offseason to improve his game and is still a very effective post scorer.

The NFL Trade Deadline is at 4:00 p.m. today, October 31, and the Philadelphia Eagles have made a move to make their offense even more dangerous in the backfield. They've acquired Miami Dolphins running back Jay Ajayi for a 2018 fourth round pick.

Dolphins are trading Jay Ajayi to the Eagles for a forth round draft pick.

Ajayi hasn't been able to replicate his successes from a year ago, but he's bound to get close to that form once again behind a better offensive line in Philadelphia. So far this season, the 24-year-old has carried the ball 138 times for 465 yards. He's rushed for 120+ yards in two games this season as well. Last year, Ajayi compiled 1,272 yards on 260 carries, scoring eight touchdowns. Ajayi is under contract through next season after signing a four-year, $2.5 million contract with the Dolphins prior to the 2015-16 campaign.

LeGarrette Blount has developed into a strong addition to the Eagles this season while both Wendell Smallwood and Corey Clement have made positive strides as well. Adding Ajayi to that mix makes the Eagles offense even more versatile than they have been through eight games this season. 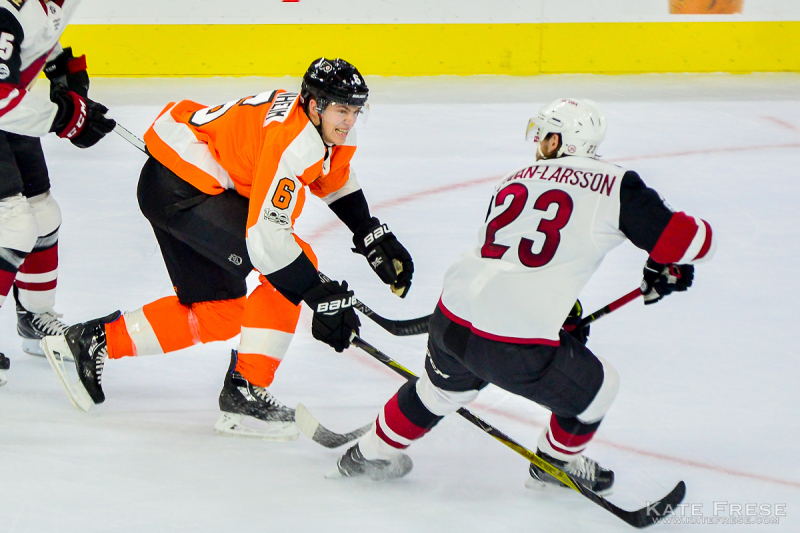 Philadelphia's defense has long been a puzzle to solve for the coaching and management staff. Now, just 12 games into the new campaign, the same puzzle has come to light once again due to a series of injuries on the Flyers blue line.

As of Monday's game, the Flyers were without Andrew MacDonald long-term. They were without Shayne Gostisbehere after an injury suffered on Saturday. They called up Sam Morin from the Phantoms and were also without him due to a nagging injury that the team learned of Monday morning, forcing Mark Alt into action.

Sixers get revenge with impressive road win over Rockets 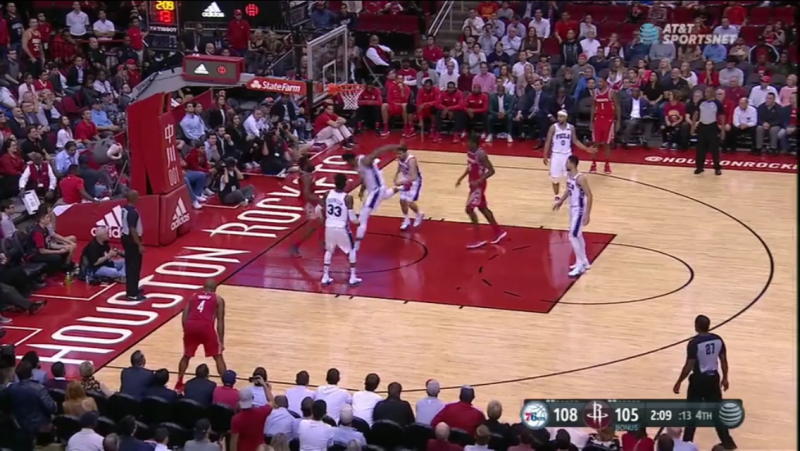 The Philadelphia 76ers (3-4) got their revenge on the Houston Rockets (5-3) to the tune of a 115-107 victory.  The Sixers came out focused and ready to claim vengeance for the heart-breaking buzzer beater at the hands of Eric Gordon last Wednesday in Philly.

But boy, did they make things more difficult than they had to be. For 59 minutes, the Flyers struggled to put anything into the net or really even generate chances as the Arizona Coyotes zeroed in on their first win of the season in their 12th game. With two quick strikes, the Flyers managed to force overtime.

That was certainly a moral victory, but the satisfaction of a late rally was put to bed in the final seconds of overtime as the Coyotes scored to win their first game of the season after all by a score of 4-3.