Eagles Flyers Phillies Sixers About Us Write For Us
Sixers officially sign Robert Covington to 4-year extension
While Flyers Struggle with Scoring, Danick Martel is Lighting Up AHL 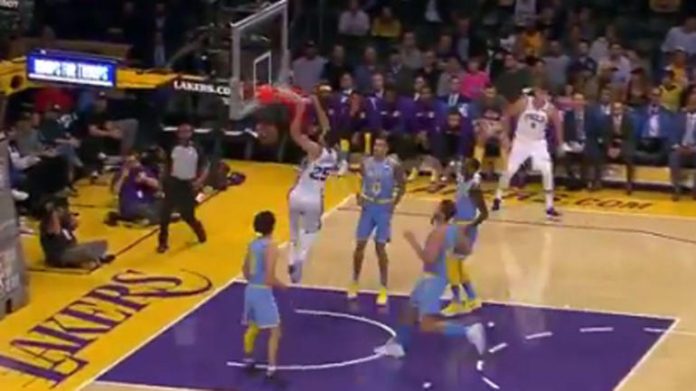 The Philadelphia 76ers defeated the Los Angeles Lakers 115-109. The Sixers' duo of Joel Embiid and Ben Simmons just did it. They gave us a glimpse of what we can expect for June. This isn't a joke. This isn't a random explosion from Embiid. The talent is real and the potential is vast.

The Sixers jumped to an early double digit lead.

With 7:27 minutes left in the first quarter, four of the five starters had at least four points, and the team was shooting 66.7 percent. The score was 18-7.  The Lakers made it competitive, but the Sixers were in control the entire time. They did whatever they wanted.

Look, this team has simply been playing basketball. Very good basketball. At this point, it's so early in the season, but you have to start thinking that The Process has come a long way.

Joel Embiid simply EXPLODED on the court. He got himself a career high 46 points. The Lakers couldn't do anything. If he wasn't scoring, he was at the free throw line. He grabbed 15 rebounds, dished out seven assists, and blocked seven shots. There was something special about that game. It was a superstar game. Produce a long string of games like that, and you're one of the greats. Such a promising start for Embiid.

Of course, Ben Simmons continues to just exists. He scored 18 points, 10 assists, and nine rebounds. He's a triple double threat every night. He runs the point like it's absolutely nothing. He played like a veteran. Oh, and he got five steals.

Robert Covington celebrated his "finalizing" of his extension. He had 12 points and six rebounds. He did his absolute best to ensure the Sixers lost this game, and all of the games since he's been on the roster.

Look, this team may very well be better than anticipated. It's not like this team is just winning big right now. There's something different, now. Closing close games. Making smart decisions in the clutch.

Hats off to Brett Brown and the coaching staff. They have done a great job taking this roster and just making it work despite the youth. Can the young players continue to produce these kinds of games? Maybe not. But they're doing it.

It's all on Hinkie, man. Sam Hinkie had this in mind. Build a team around two-three once in a lifetime talent, and then sit back. This is The Process. This is why Sixers fans sat down staring at horrific loss after horrific loss. This is why. Now you know. Now you see. It'll be a couple of years at least, but this team is legit.

Markelle Fultz still isn't ready yet. Once he gets up and running, forget it. Ben Simmons just dunked on Lonzo Ball, man. He did. Embiid wrecked the Lakers. Maybe it was personal. Maybe this team really does suck and this was just a fluke.

Maybe this team is the real deal. Either way, stop hating and just enjoy the ride.