Eagles Flyers Phillies Sixers About Us Write For Us
Despite Recent Skid, Too Early to Count Flyers Out
Flyers Crash Against Canucks, 5-2

Evaluating the Flyers at the 20-Game Mark 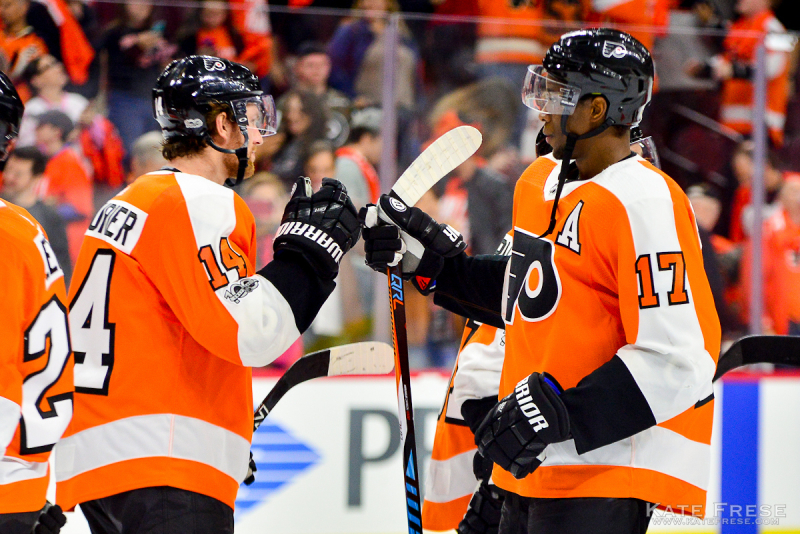 On Saturday, the Philadelphia Flyers basically hit the quarter mark in the season playing in their 20th game of the season out of 82. Hosting the Calgary Flames in a matinee game, they hoped to turn things around and hit that mark on a winning note.

They came close, but lost in overtime after Calgary came back from a two-goal deficit in the second period.

So at the quarter mark, where do the Flyers stand now and how does that compare to where they were at this point last season?

The Flyers have several new faces on the roster including two new high-end defensive prospects and their highly-touted draft lottery pick Nolan Patrick. Fans had hoped that the infusion of new talent, along with casting off some of the lesser-skilled players from years past, would position the team to pile up some additional wins.

Twenty games into the season, the Flyers are 8-8-4 with 20 points. They are last in the Metropolitan Division, but also just three points behind the final wildcard spot. Three teams ahead of them in the playoff race also have a game in hand on the Flyers, but four teams already in the playoff picture have played more than 20 games, leaving a lot of room for shuffling in the standings in the weeks to come.

At this point last year, the Flyers were 9-8-3 a single point ahead of this season.

One area of concern going into this season has been an ongoing issue of consistent scoring. Without Brayden Schenn, who was traded on draft night, and his typical 20-25 goals per season, would the Flyers sometime sputtering offense cost them close games?

Last year at this point, the Flyers had scored 65 goals for 3.25 goals per game. That put them right around the Top 5 in the league at the time. While they started the season playing well on defense, the goalie situation was a disaster and they had given up 63 goals for a +2 differential.

They were allowing 3.15 goals per game which put them around 26th in goals allowed at this time last season.

Currently, the Flyers have only scored 56 goals for and have given up 54 goals. They are only scoring 2.8 goals per game, which is inflated by several early high scoring games and hurt by five shutout losses. This puts them at only 23rd in the league as scoring is up across the NHL.

However, they are only allowing 2.7 goals per game, which is down from last season and is even more impressive given that scoring is up this year. The team defense has played well, even during the recent streak of losses, especially with a very young group of defensemen with limited experience in place. The Flyers goaltending has improved significantly over last season as well.

The additions of Travis Sanheim and Robert Hagg on defense has been a significant upgrade over Nick Schultz and Michael Del Zotto. Ivan Provorov looks amazing in his second year while playing top-pair minutes, and Shayne Gostisbehere seems to have found his game again.

The Flyers have been shut out three times already in November in only eight games and five times total for the season. The only consistent scoring has been from the top line of Claude Giroux, Sean Couturier and Jake Voracek. In two of the other five games in November the Flyers were limited to only two goals in the game.

Chris VandeVelde and Pierre-Eduourd Bellemare not returning has added speed and tremendous puck possession to the fourth line. That line while not producing yet certainly has more offensive potential than it did last season.

Patrick is going to be key to future success for the Flyers. His making the roster as a 19-year-old and getting a year of experience under his belt will be a significant asset as more forward prospects earn their places on the roster as well in years to come.

The Flyers special teams is also in a slump. They are currently ranked 17th on the power play and 24th on the penalty kill.

Last season the power play had tallied 19 times out of 69 chances for a success rate of 29 percent. This season, they have the same opportunities but have only converted on 13 of the 69 for 19 percent success rate.

It is surprising how similar the raw statistics and point totals in the standings are for the Flyers from year to year. That does not mean they have not improved and are not better positioned for the future than they were a year ago.

Unless this team starts playing "Team Defense" and not just the defensemen, but all offensive lines. Also, Mr Hextall, they are getting pushed around a little bit too much and are in need of a "policeman". If Mr. Snider {God rest his soul} he would not permit his team to get "pushed around" especially at home. AS of right now, its going to be an early vacation if things don't change.